There are two things to know about Warhammer 40,000: Battlesector. First, it’s an excellent vehicle to live your Space Marine power fantasies, especially if you’re a fan of the new Primaris units. It’s also not the most exciting turn-based strategy game you’ll ever play. But it does possess a very solid foundation that could lead to a glorious future.

Battlesector, from the developers that brought you Battlestar Galactica Deadlock, follows in the footsteps of a similar game that was also published by Slitherine (although made by a different developer) – Warhammer 40,000: Sanctus Reach. While the two games focus on different parts of the grimdark setting, both share a core vision in that they offer an excellent distillation of the tabletop game in digital form.

If you’re looking for a way to experience Warhammer 40,000 without shelling out the money, this is one of the best games on the market that gives you a ‘close enough’ experience. Battlesector sits at a nexus of ‘old’ and ‘new’ 40k, with a story that sees the Blood Angels trying to rebuild after a Tyranid invasion almost wipes their homeworld off the galactic map. Only intervention from the Indomitus Crusade and Roboute Guilliman staved off total annihilation, and with the Ultramarine legend came the shiny new Primaris Space Marines.

If you’ve been loving what Games Workshop has done with the Adeptus Astartes in recent years, then Battlesector is a fantastic way to tap into that ‘new hotness’ energy. The early missions are meagre, but offer an excellent show reel of the new models, such as Intercessors and Inceptors. We don’t get the shiny new floating tanks, although the Blood Angels’ trademark Baal Predator, Dreadnoughts, and even Death Company Assault Marines form a ‘greatest hits’ of the firstborn unit roster. 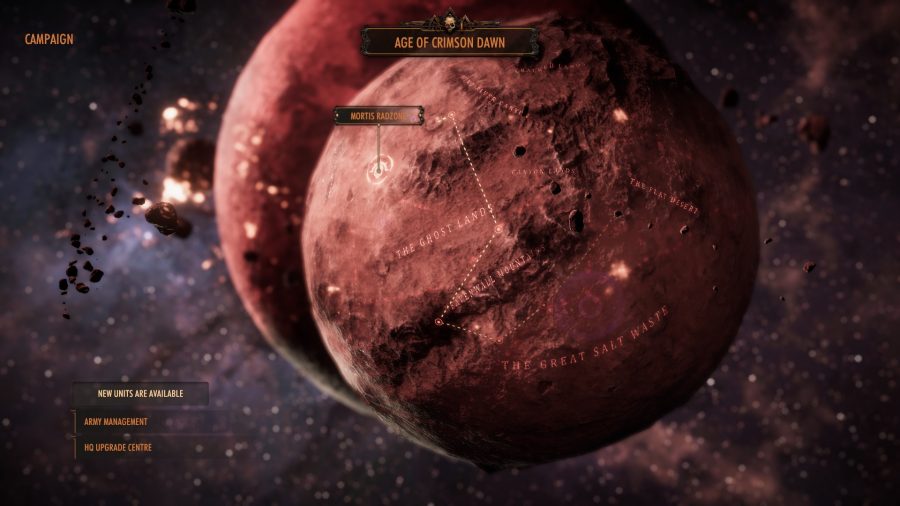 The campaign is a fairly no-frills run of 20 linear missions, with some army building and light persistence elements. As you progress through a campaign you’ll unlock new units and also new commanders – heroes such as Brother Quindar (a Dreadnought), or Techmarine Croginax. These guys are powerful on the field, but they have campaign progression too in their bespoke tech trees. Each mission will unlock points that you can use to purchase new abilities, stat boosts, and new gear options.

There are plenty of nice things I could say about Battlesector, but your mileage may vary depending on how much you enjoy the universe. Without that, Battlesector becomes a trickier sell. It has some excellent technical foundations – turn-based battles are pretty, they run smoothly, everything works in a way that makes it a dream to play – but the scenario design leaves much to be desired.

Battles can have high notes, such as presenting you with sweat-inducing set-piece challenges, but there’s also plenty of drudgery. While setting up a perfect overwatch line, taking down a particularly difficult enemy, or even simply laying waste to the xenos like weeding a garden can provide fleeting moments of exhilaration, these are often smothered by the explore-and-grind that seems to permeate nearly every mission. 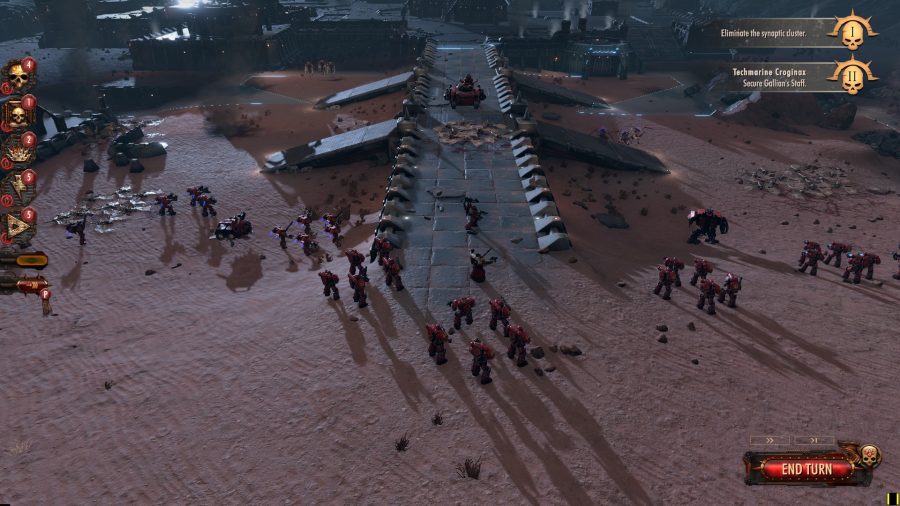 There is variety in the core objectives – find this thing, defend that person, survive this ambush, etc – but once you’ve gotten over the crescendo of a mission’s purpose, you almost always have to mop up the remaining enemies like it’s the ’90s. This humdrum hunting can also occur at the beginning of missions too, as you’ll sometimes spend a few turns trying to make contact with the enemy’s main force. These dull bookends blunt the edge of what can be some very sharp and engaging skirmishes, as the AI is capable of punishing you when you least expect it even on standard difficulty – which is otherwise only lightly taxing.

This is all exacerbated by the fact that there’s little replay value to the campaign. You can replay individual missions in the skirmish mode, but there’s not enough to inspire a full repeat playthrough. The wider narrative often gets lost among the whining of several of the main protagonists over whether or not they’re getting replaced by younger, newer Primaris marines, like they’re baby boomers complaining about millennials and their new-fangled Mark X Gravis armour. Just what is a TikTok anyway?

The focus of the game are the Adeptus Astartes, which is fairly standard for 40k, but you can play as the Tyranids in skirmish and online modes. Battlesector’s skirmish is also very flexible – you can play Space Marine vs Space Marine or even Tyranid vs Tyranid, and the swarm is satisfying to play in its own right. The Sisters of Battle make their appearance later in the campaign and can be used in campaign army management, but not in the separate skirmish mode. 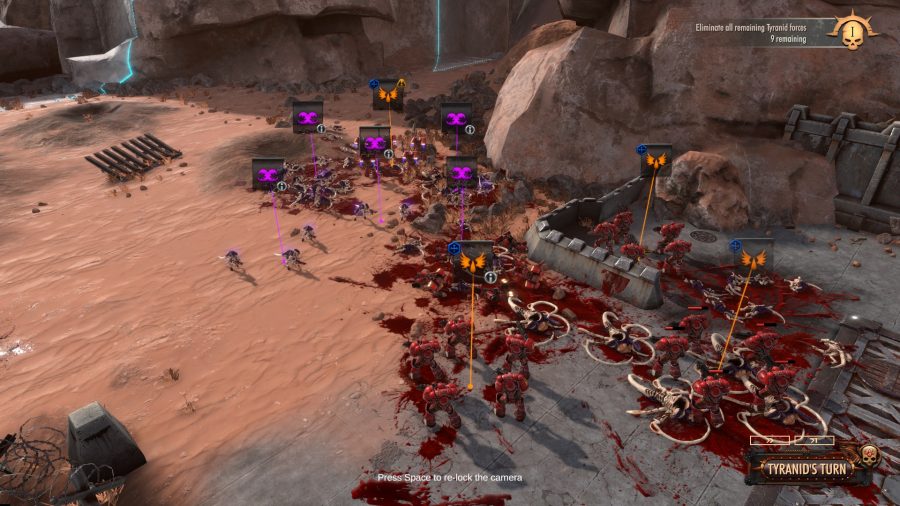 It’s hard to say whether Battlesector’s shortcomings are a result of the limitations of the setting, or Black Labs’ relative experience (or lack thereof) with land-based warfare. This is a studio that’s mastered space-based tactical combat, as well as sandbox campaigns, and Deadlock emphatically proved these devs know how to handle a licence and create exciting new arcs within an established universe. For whatever reason, that spark isn’t quite there with this game, but Black Labs’ technical mastery of strategy design still shines through. A more replayable campaign would have made up for the rote mission design.

If nothing else, Battlesector heralds a potentially exciting new chapter in Warhammer 40,000 strategy games. Much like how 8th edition laid the foundations for some of the exciting changes now coming through in 9th edition, Battlesector’s robust turn-based framework is screaming for new factions, campaigns, and mechanics. If Black Labs can also improve its skills in land-based scenario design, these muted origins will be outshone by what could come next.