Turn-based strategy games can be pacey, but only up to a point. The fact that the flow of play is cut up into turns – and the pace that can be set is down to one’s ability to do everything that needs to be done in a turn – naturally sets it apart from its RTS cousins.

Warhammer 40K was born in a turn-based environment, and one of the setting’s newest spawns – the recently announced Warhammer 40,000: Battlesector – will also be a turn-based strategy game; one that promises “fierce, fast-paced combat”. But how do you keep a turn-based game ‘fast and fluid’?

With Battlesector, this question is doubly important: you must factor in customisable load-outs, a diverse range of unit abilities, accounting for zones of control, and all of the other potential minutia lying beneath the surface. Our sister website Wargamer spoke to developer Black Lab Games to find out. “It’s all about relativity to the norms of a turn-based game,” explains Black Lab Games founder Paul Turbett.

“There are some turn-based wargames where it takes two hours to have a turn, with hex grids, and counters, and a lot of detail.” 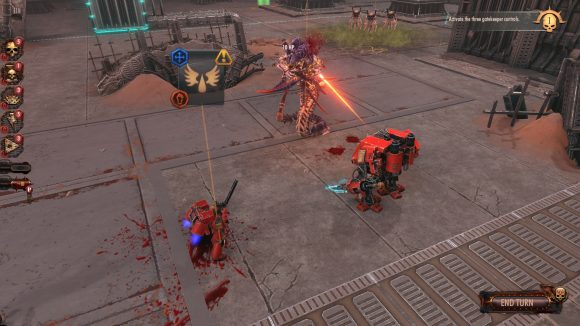 “We’re on the other end of the spectrum to that. You’re not stuck waiting for things to happen, you’re always able to be giving commands, to keep the game moving forward.”

The studio is making some smart design choices to try and capture the wanton bloodlust of the 40K setting. There’s a momentum system which will award scaling buffs provided you keep up the pace of assault, and specific attention has been given to melee mechanics. The combatants of the grimdark far future wield plenty of guns and weapons of mass destruction, but there’s also chainswords, powerfists, and – with regards to races like the Tyranids – good ol’ fashioned claws.

“Quite often, you’ll do a lot of detailed design on ranged combat and its mechanics,” says Turbett. “We wanted to make sure that melee had the same amount of weight in terms of options you’ve got; the same depth to the systems. Melee combat needs to feel dangerous.”

More like this: Wargamer has some great 40K faction guides

We highly recommend you read the full interview to find out more about what Black Lab Games has in store for Battlesector. A beta is due to start sometime soon, with the game still officially slated for release later this year. We’ll let you know when we hear more.