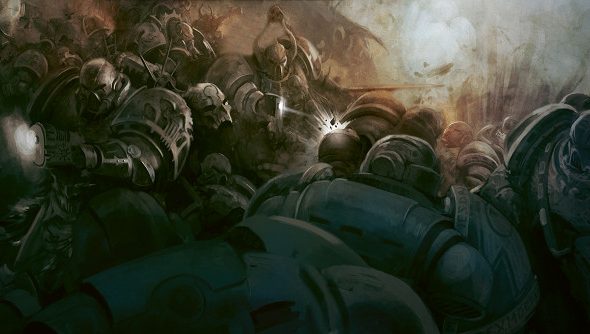 I’m going to open this article by establishing something: I absolutely love the Warhammer 40,000 setting. There is something so absolutely imaginative about the system which begat something that now sounds as generic as “space marines.”

I mean, let’s look at it: these space marines are actually in service of an emperor who is basically dead, but kept on a bizarre life-support throne which has allowed his consciousness to protect mankind from the forces of Chaos for tens of thousands of years. Except the throne is breaking down, and when it does, his decaying body will finally snuff out. And no one can fix it, because no one understands how technology works any more — in fact technology is treated as religion, not to be understood but to be worshipped.

It’s bonkers. The world of Warhammer 40,000 is bonkers, and very, very dark — after all, if Chaos doesn’t eventually kill mankind, the Tyranids, a countless horde of hive-mind aliens, will. And honestly? If you want to work in that kind of context, that kind of thing has to touch some part of your brain that just thrills you. That’s certainly the case with Miguel Caron and Behavior Interactive, who are working on Warhammer 40K: Eternal Crusade, a massive online shooter.

If you’ve been following the news, you’ll probably be confused: wasn’t there already an MMO based on Warhammer 40,000 coming? Dark Millenium or something? Well, the answer there is a bit… vague. THQ, who owned the rights, went bankrupt. But before that happened, they announced that the MMO “part” of Dark Millenium wasn’t working out so they were canning it. While it’s never been fully announced that the title is now completely cancelled, that only seems to be because THQ aren’t around to make announcement.

In a chat at this year’s E3, Caron explained. “What happened [with THQ] was a big learning experience for Games Workshop. We have the exclusive rights to the IP for our game, but the way they give out the IP now is they slice it up: we are promising a third-person, over the shoulder shooter with massive warfare. No story, only war. We pitched it to Games Workshop and they carved that out of the IP.”

“There may be other Warhammer 40,000 games!” he laughed, “On iPad, or even a story-driven MMO a la Rogue Trader. Before this, THQ got the rights to the entire IP. But for Games Workshop it’s not about how much money they make selling the IP to someone. They don’t want someone to buy the IP but not actually get a game out with it. So they have the same goal as us: to get a game out that makes the fans happy.”

It’s all good to know that Games Workshop are actively involved in this upcoming game, but with little more than a (scant) press release and an announcement website to go on, what is there to get excited about? 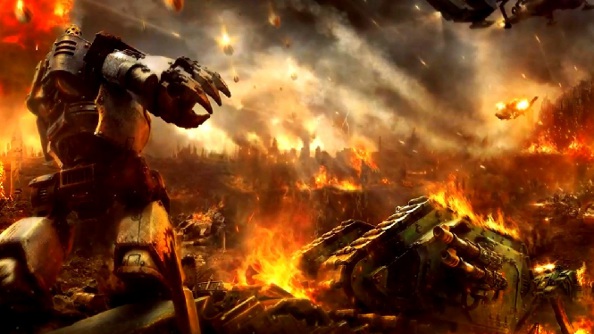 “Imagine the massive warfare of Planetside 2, but we are aiming to double the number of concurrent players in a battle,” Caron boasted. If he’s serious, that means battles with potentially as many as four thousand players. “Thousands of Orks slamming their shields, Space Marines on the other side, running towards each other and slamming into each other like it’s 300. An epic, bloody battle until at the end there’s one huge Ork Nob battling against a lone Space Marine hero, with fallen players and more watching it happen via a feed direct to Youtube.”

Caron talks with a real passion and belief, even if you can tell such ideas are still lodged right in his brain rather than reality. After all, he admits the game doesn’t plan to go into an open beta for two years yet. Caron is so incredibly passionate, however, that as a long time player of the tabletop game he actually left his CEO role at Funcom in order to make this game — approaching and somehow managing to convince the team at Games Workshop to sign on for his MMO without having a studio attached.

“This is my project; when I was with Funcom in Montreal I wanted to use this license but they did not; it was one of the reasons I left. I want to make this game. When I started it was not about the company, but the game. Even on my own, I still had seven people with me working on the game, building it, and they are the core team at Behaviour right now. When I joined Behavior, it was predicated on them not just getting me, but my team.” 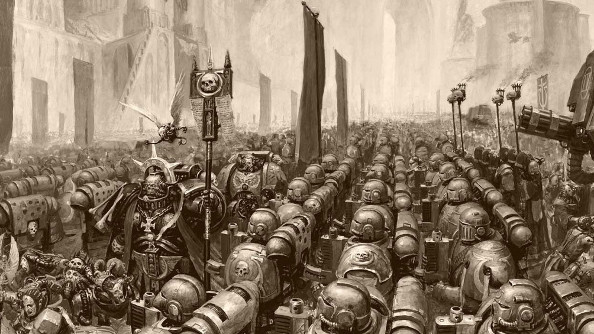 He adds that Behaviour are the “best studio” for the job, referring to their long history (originally as the unfortunately named A2M) working on licensed games. He says that one thing the studio has developed over its years making licensed games is strong internal discipline and project management.

Perhaps taking a dig at the last folk to have a crack at a Warhammer 40,000 MMO, he added “Behaviour is all about financial discipline. It’s very important, because when you talk about making such a large game… well you see so many companies go bankrupt trying.”

And make no mistake, while the basic outline of Eternal Crusade as a third-person shooter might not sound that ambitious, Caron could talk for hours and hours about every piece of minutiae they’ve decided for the title. In particular, he’s hugely proud of his plans for the game to be almost entirely player-driven.

“One of the things I hate about massive warfare in MMOs is when you have no real winner. We are going to have campaigns, between two weeks to three months long, across a persistent world. But we will not control it. We will have a three level hierarchy. You can be a squad leader, a chapter leader or a war council leader. This is voted by the players …So the overall objective will come from the war council, through the chapters to the squads, and each layer can add their own rules to the objective. Players will decide what they do, and the front lines will change and planets [will be] won or lost as a result.”

Now the game will be free-to-play, but before you shut the browser window, Caron is determined to see it as a positive, and one that works with the license. All because of a key restriction: free players won’t be able to play as leaders. 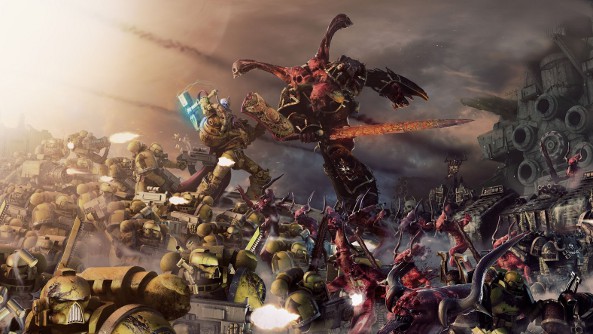 “The four armies we have announced so far are the Space Marine Dark Angels, the Chaos Space Marine Iron Warriors, the Eldar and the Orks. So to take the Orks as an example, we have two strengths of Ork: Ork Boyz and then the Nobs and Bosses. Now, I think balance is a false goal: war is not balanced. Yes, we are going to make sure everyone has fun, and in terms of making each character equal against another character, we will try and do that, but an Ork Boy against a Space Marine? Well you’d need two or three to have a chance. The fans know this; they’d kill me if it was any different. Nobs, that’s different. But having a homogenous balance goes against the IP.”

He continues, “So certain races will be premium, and we’ll talk about this more, but right now I can guarantee the Ork Boyz will be free, because I want them to represent what they do in the IP.”

“Look at it this way,” he explains. “what’s the difference between how free players and paying players view each other? Paid players think of the free players as rude, uneducated about the game; noise on the line. That’s Ork boyz! So when an Ork Nob player gives an objective to his Boyz, ‘go attack the Space Marines here!” well out of 100 Orks thirty are going to say ‘yes boss!’ and the other seventy will do whatever they like. That’s Orks!”

However, he’s not too willing to get bogged down in the specifics of the free-to-play business. “There’s a lot of noise about it, and we have lots of ideas like that, but are just beginning to build the game. In two years, who is to say what the player is going to want? Even players who agree with us now might change their mind.”

He concludes with a promise: “we’ll listen to you, however.”

Fans of the IP have been here before, of course, and wishes in this industry are rarely more than that. But talking to Caron it’s hard not to buy into the self-belief of a man who left a company to make this game happen. Will it live up to his dreams? There’s two years at least to wait to find out, and whatever the result, Caron is taking full responsibility.