Let’s make one thing clear: I’m no Warhammer 40K buff. I’ve enjoyed the franchise from afar: a half-hearted day or two spent repeatedly injuring Skaven and humans with a team of Orcs in Blood Bowl 2, but not reading the books or painting miniatures. So, as someone who’s never truly yearned for a Warhammer 40K MMO, I was surprised by how much the thought of one interests me now, after getting a hefty amount of hands-on time with Warhammer 40,000 Eternal Crusade: last week.

Categorised as a massively multiplayer shooter by its developers, Warhammer 40,000: Eternal Crusade is in fact a tough game to nail down to any particular genre. At a cursory glance it’s an online third-person shooter. The addition of vehicles inspire comparisons to Battlefield ,while special units like heroes and Terminators align it somewhat with Star Wars Battlefront and even some MOBAs. On top of that there are also a host of persistent-world systems and mechanics that are reminiscent of PlanetSide 2. It’s immense – theoretically – but I’m yet to see anything of it outside of the ground level conflict of game’s maps. 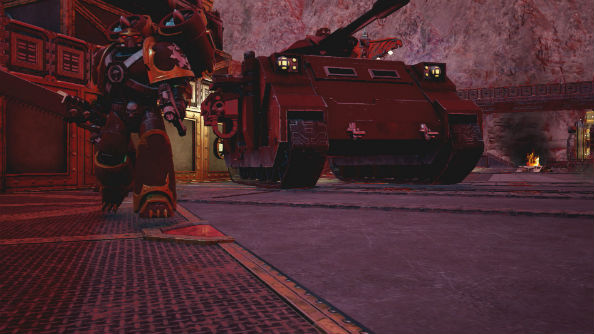 What I have seen is a fun and occasionally grandiose shooter that’s marred by technical issues – that this game is still in alpha goes without saying.

When it works though, it’s spectacular. Space Marines clashing chainswords with their Chaos counterparts, Rhinos carrying their payload of fresh troops through a haze of bullets and destruction, each and every capture point an agonising struggle where teamplay and individual skill have an equal impact on proceedings.

Combat has a certain weight to it that’s brilliantly suited the steel spires and monstrous architecture that house Eternal Crusade’s indoor skirmishes. These close-quarter battles are dominated by heavy weapons and melee combat, the former dispersing groups and the latter essential in beating them back beyond the perimeter of a contested capture point. 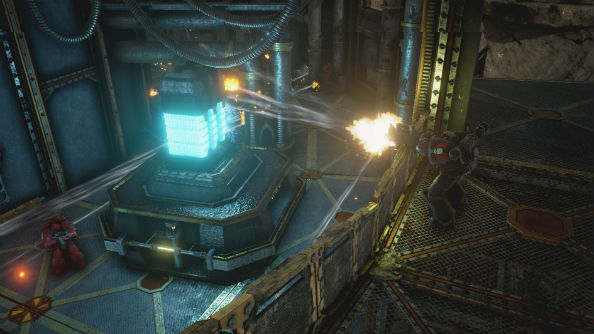 Melee combat is where Eternal Crusade really comes to life, providing players with a quick, effective and satisfying break from gunplay that is often the difference between beating your opponent. Animation-breaks and stun-locks can ruin a fair duel by making winning or losing feel cheap – it’s still somewhat clumsily implemented – but the fact that Dark Souls-like bouts have managed to find breathing space in a massive online shooter is worth shouting about. Learning when to block, attack, maneuver or break away entirely and resume shooting has its own finesse and claiming the kill in such an even stand-off is hugely rewarding.

The shift in favour of melee combat, as well as the placement of most capture points indoors, comes with a cost: ranged combat feels somewhat lost in the enormous maps of Eternal Crusade. That’s not to say that guns aren’t deadly in their own right, but the maps don’t allow them to be used to their full potential. For example, large weapons like the heavy bolter can be set up like a turret on barricades, but with few people running around outside there are no targets to shoot, and the turret mode is far too rigid to work inside. Likewise, standard guns like the bolt pistol can and do earn kills, but only against other bolt pistols or severely weakened enemies.

This issue reaches its nadir with the ground assault class, a sword-and-shield wielding knight of old that enemies literally turn and run away from when facing it alone. Even against two or three enemies, most fancied their chances elsewhere. Of course it’s hard not to love a massive online shooter where the best weapon is a Power Sword, but it’s a balancing act that needs addressing, as much as I enjoyed exploiting it. 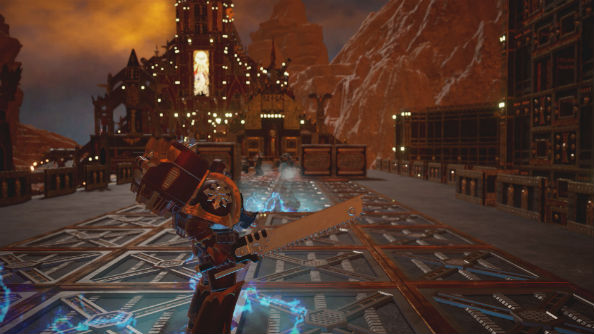 Vehicles help close the gap between short and long-range combat, drawing players out into the open and marauding anyone in sight of a window. Clever map design allows vehicles to roam freely through central channels, but stops them from being able to cut down players at their spawn points or around the entrances of key buildings. That said, I did find myself being chased up a flight of stairs by an Eldar vehicle that had somehow managed to wriggle its way through a window on two separate occasions.

When the fighting let up for a moment or two I was able to appreciate Eternal Crusade’s quietly brilliant map design. Pegasus Station, a night map lit only by moonlight and aurora borealis, is a glorious example of neo-gothic architecture. Buildings are massive authoritative slabs of stone and metal, ringed by fire-pits, skulls etched, stamped and jutting from every corner and ledge. These cathedrals of industry are the staging point of Eternal Crusade’s tooth-and-nail indoor clashes, and they make every small victory feel epic and monumental.

These environments set Eternal Crusade apart from so many shooters it might mechanically be compared to. There are no dilapidated shacks and office buildings to fight in or war-torn villages to decimate with your shiny hardware. Instead Eternal Crusade’s battlefields are as concrete and imposing as their inhabitants. It’s the old dilemma of the immovable object going up against an unstoppable force, and it’s ideal for a game that’s all about an endless, unresolvable fight for supremacy. 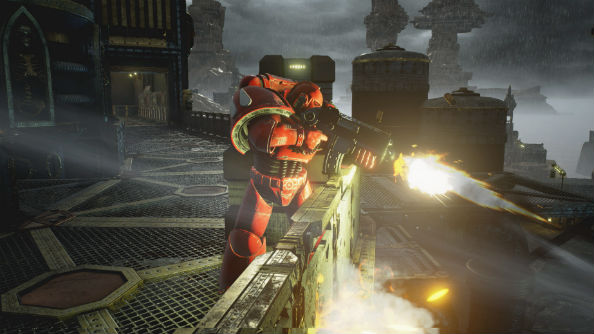 Ignoring the persistent-world mechanics that still remain clouded in mystery, Warhammer 40,000: Eternal Crusade is – when it works – a compelling third-person shooter. The problem will come when Behaviour try to tie the two games together, with players leading entire campaigns as generals in a planet-sized virtual war.

This isn’t an unfair question to be asking either, with the game due out on PC this year and so much work still to do before it’s ready for a full console release. If Behaviour can get the little things right, they’ll be shipping a remarkable online shooter. But in it’s current state, with so much yet to be added, it’s a big if.

Looking forward to slaying Orks in the grim darkness of the far future? Let us know in the comments below.