Unsurprisingly for a game set in perpetual grimdarkness, Warhammer 40,000: Mechanicus is a tough old turn-based strategy. It casts you as the titular Adeptus Mechanicus, a faction of humans from Mars who worship technology so obsessively that people who camp overnight outside the Apple store for the latest iPhone come off as mere part-timers by comparison.

It’s their first ever appearance in a game, but you’ll grow to love their charming eccentricities. The Adeptus Mechanicus, you see, have transcended squishy human form to become one with wires and metal and weird beeps and boops. They subscribe to a creed that states: ‘There is no truth in flesh, only betrayal’, and name their babies things like ‘Cog Boy’ and ‘Shiny Bob’. Allegedly.

That zealotry has earned them no shortage of enemies. In this case that’s the Necrons, an ancient race of skeletal robots fighting to reclaim the galaxy from younger upstarts. Upstarts like the Mechanicus.

We’re going to show you how best to boss them on the battlefield, dominate their Xenos dungeons, and ultimately embrace the purity of steel. Lovely, laser-resistant steel. 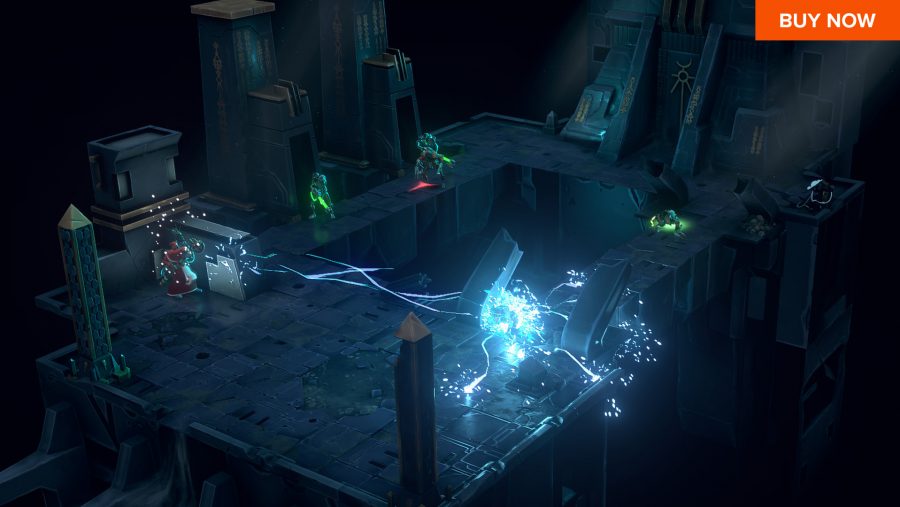 Kill your enemies, then kill them again

As robots made of living metal, Necron units are exceedingly hard to destroy. Deplete their health bar and they’ll reassemble themselves using their in-built Reanimation Protocol, popping back up and fighting on with dismembered limbs and gaping wounds fully healed. There is a way to see them off for good, however, and that’s by striking them during this Reanimation Protocol.

You’ve got several turns in which to do this, depending on the type of unit you’re facing, so use the window of opportunity wisely and kick ‘em while they’re down. Of course, the Necrons never really die. They just teleport to safety. But for all intents and purposes they’re gone and you won’t have to deal with their creepy weirdness for the rest of the skirmish. 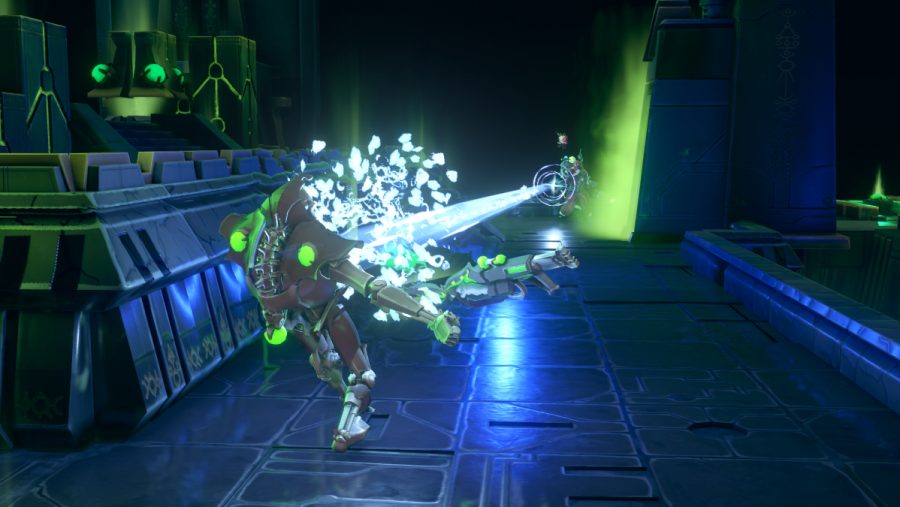 All weapons have what’s known as a ‘machine spirit’. Think of them like temperamental toddlers, each with different personalities. Of course, weapons always fire as intended, so there are no nasty surprises there. It’s not like you’re going to come home and find your shotgun’s drawn on your walls in crayon. It’s more that, when the machine spirit is charged, they’ll give you a nice little buff. A buff that says, ‘hey, thanks for caring about me. Here’s a present’.

These presents range from increased damage, say, or area-of-effect for that specific weapon. Way better than what toddlers give you, which is very often crying. Every weapon has its own machine spirit, and with it, its own distinct perk. Thanks, Machine God. We could never be mad at you. Because that would be heresy. 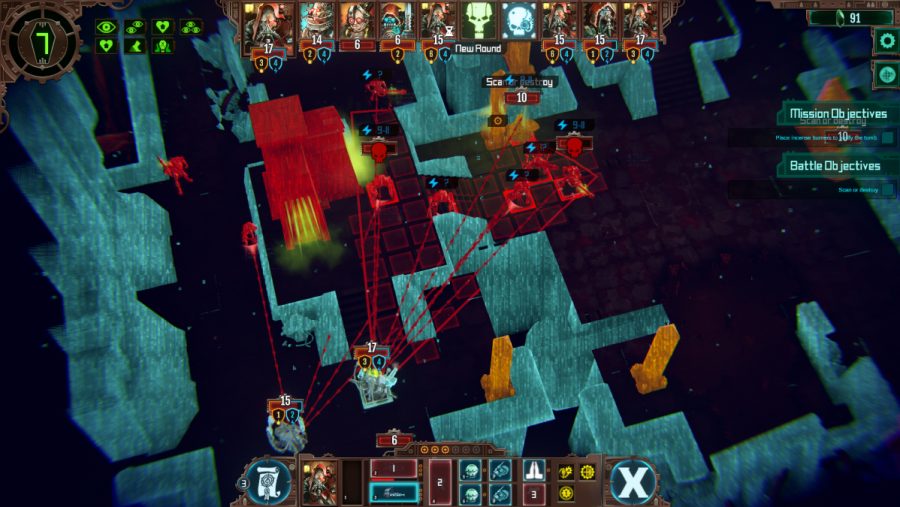 The Xenos tombs in Warhammer 40,000: Mechanicus hide many secrets. Your quickest method of understanding them is by holding down the spacebar. This lets you enter something called the Noospheric view, showing the world as it looks to your Tech-Priests. HP, physical armour, and energy armour statistics are represented here, so you can then decide what weapon types work best in defeating your chrome-domed opponents.

Before you can do that , though, you’ll need to scan each enemy with your Servo-Skull. Each Tech-Priest has their own personal bone butler, and using them to discover enemy stats, or go off on pilgrimages to gather vital cognition points, is free. They’re easy to overlook when you’re busy brawling with a squad of space Terminators, but don’t neglect your skully companion. 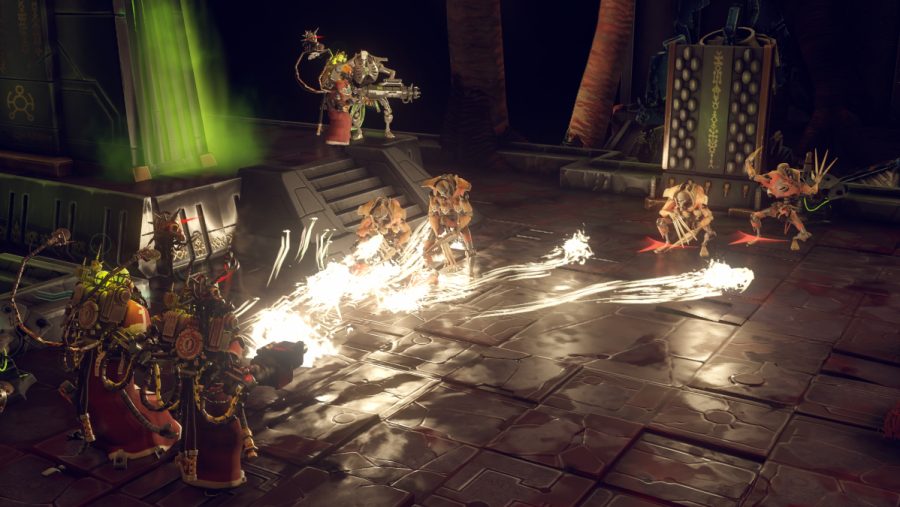 Not only do you not use cover in Warhammer 40,000: Mechanicus – you can’t use cover, because it doesn’t exist. This will naturally make you feel awfully exposed at first, but forget waist-high walls were ever a thing and plan accordingly. For instance, some units wield long-range weapons that can strike from distance, so keep these units as far back as you can.

Close the gap and you’ll be able to whip out your melee weapon. The first unit to retreat from melee combat gives the other an ‘Opportunity Attack’, which is essentially a free hit, so make sure you only commit to the hand-to-hand stuff only when you’re ready to end the fight. This makes Mechanicus a game about managing distances. 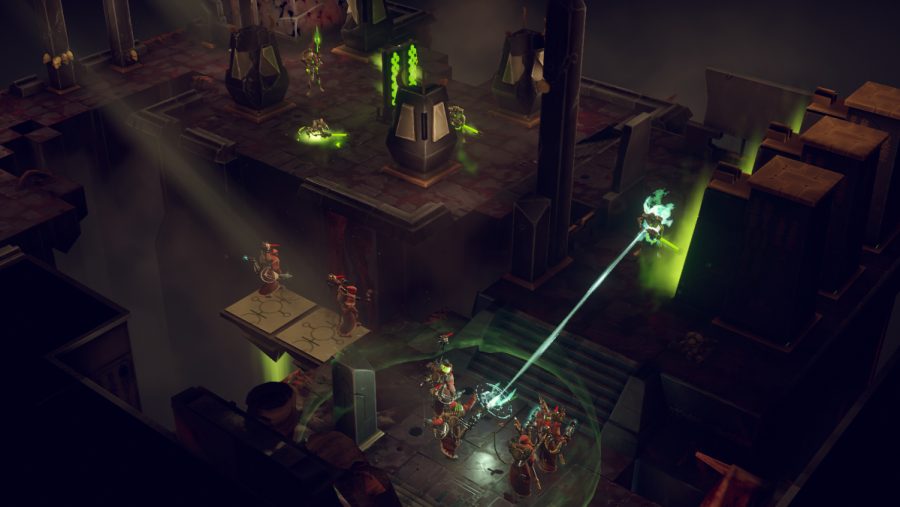 Don’t mourn the death of units

Death isn’t the end of the world in this game. At least, not for you. Throughout the course of a match you’ll get minions called Servitors to control, provided you’ve brought some along with you and have enough cognition points to use them. You don’t have to treasure them as you would the rest of your team, who carry their war wounds with them post-fight.

Instead, use Servitors as part of a suicidal strategy by throwing them into the meat grinder and giving their pointless lives some meaning. They love it. Teleport them straight onto the battlefield with cognition points, flank opponents, or use them as bait. When they die, you even get a cognition point back. Thank you for your service, Servitors.