Warhammer 40k: Chaos Gate – Daemonhunters is a grand, detail-rich take on turn-based strategy in the magisterial nihilism of Games Workshop’s grimdark universe. It’s a game of stoic post-humans in preposterous shoulder pads – the Grey Knights. Like the seminal aggro-rave troupe The Prodigy, the Grey Knights are absolutely always outnumbered, but somehow emerge victorious from a wash of corrupted viscera and chaos all the same. That really is where the comparisons with Liam Howlett & co end, though.

Chaos Gate – Daemonhunters is a strategy game that’s just as much about repelling vast waves of a corrupting plague, as it is about careful resource management and Chapter politicking. There’s a lot of XCOM to it, and more recently Gears Tactics, but truthfully it dives so deep into the minutiae of Dreadnoughts, Inquisitors, and a culture built around religious zealotry and cybernetics that it can’t help but feel distinct.

So the story goes, a Chaos plague known as the Bloom is ravaging nearby planets, the work of Nurgle himself, and that proves enough for an Inquisitor named Vakir to commandeer your ship and start calling the shots. And after a few battles, you’ll probably have no complaints with that. This Bloom can do one.

The first and most important thing Daemonhunters does well is to make its plague feel like a plague. Bloom levels rise as your ship travels around the star system, corrupting planets and thus making them trickier hosts for future battles by adding more mutated enemies and debuffing your units. There’s never enough time to reach all planets that report a Bloom outbreak promptly, and while I found that maddening at first, eventually I accepted that it is by design. 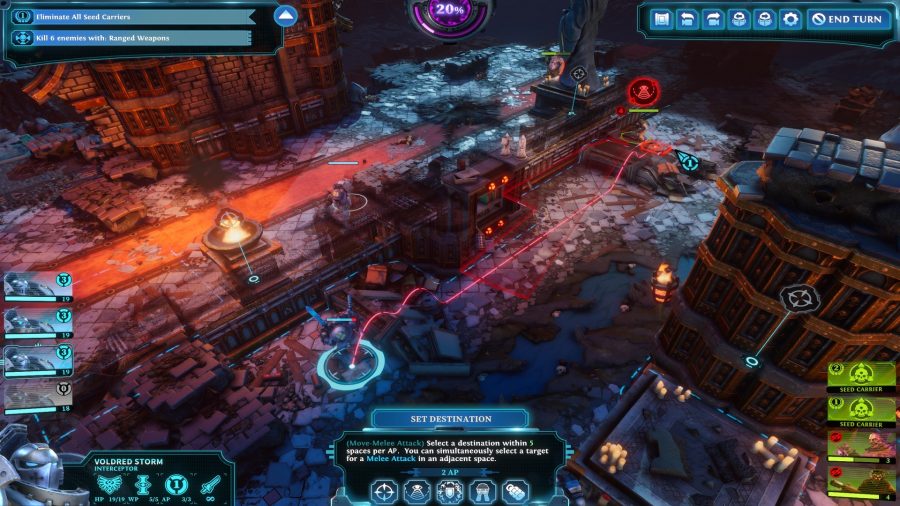 Bloom also increases per turn during missions, eventually spawning reinforcements for enemies and mutating them into tougher, meaner variants mid-battle if you’re not incisive in every action. This was, once again, a source of profound personal frustration – several times I’ve been just one or two insignificant little enemies away from concluding a mission, didn’t quite finish them off on the last turn, and then watched the screen fill with throngs of new foes. Foes who summoned dead enemies as Poxwalkers and basically made it feel like I was starting the level again from scratch, except with no health or grenades left.

Chaos Gate makes a fine entry point into the world of Warhammer 40k, so well does it handle the vast lore at its disposal

Again, I eventually made peace with that as a design feature. Infections, invasions, and plagues are (ironically) rife in modern game design, from Rainbow Six Extraction to Subnautica, but they all feel very manageable and predictable next to this one. It’s suitably grim and dark that the Bloom never feels under control. Not even when you drop the difficulty down and win every battle easily. It still finds a way to infect your savegame.

If conveying chaos is Daemonhunters’ first great strength, making it all digestible is its second. A game with this much background lore and this many different mechanics, built around a turn-based framework, should by rights be an unwieldy mess. Somehow, against decades of licensed Games Workshop title tradition, this one is the opposite. It gets the basics across in a dramatic opening tutorial battle, builds on them at a well-judged pace for the next few hours, and produces fair and understandable combat consequences every turn. 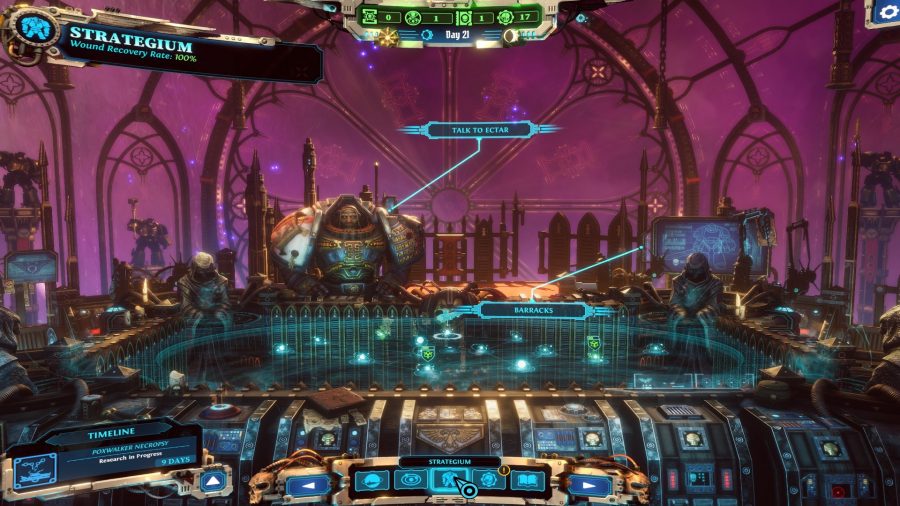 In the long term, you’ll be spending as much time among the menus of your ship, the Baleful Edict, as out in the field. But here too, Daemonhunters comes good. Every area of the ship looks and feels distinct, and they’re each populated by crewmembers who chat to you, bitch about each other, and form pivotal roles in the larger plot arc.

That goes some way to alleviating the frustration of getting bogged down in nigh-endless fights, watching your resources deplete and having to grind your way back to where you need to be. As much as anything, the story’s there to remind you things aren’t supposed to be going well in this universe. Not ever.

I’d go as far as saying Daemonhunters makes a fine entry point into the wonderful world of Warhammer games, so well does it handle the vast lore at its disposal. And it wields it smartly to set up a game of defying the odds, turn after turn, never being quite satisfied with the battle’s outcome but having achieved just enough to carry on fighting.

Turns out it’s possible to be a turn-based Warhammer 40k game and still retain user-friendliness and pace. Who knew.