As I stumble into Nuln’s sewers a sense of déja vu strikes. A sea of stodgy minions snatches any spare inch of space in the gutter’s narrow passageways, provoking claustrophobia. Before I can get my bearings, they notice me and come barrelling toward my position. These aren’t the kind of odds I’d usually expect to beat, but Warhammer: Chasbone lets me live out the type of power fantasy that makes toppling these odds feel like an art form.

I call upon a combo of moves that I’ve been rehearsing as Chaosbane’s Wood Elf. I throw out a slow but bulky bladed star, then let fly a pair of knives in widening spirals around me, damaging anything that comes near. I still have a few seconds before the weakening daemons reach me, so I fire a few arrows into the mob.

As they draw close, I use the Wood Elf’s ‘archetype skill’ to roll backwards, abandoning my protective whirlwind of kunai. I watch the minions vanish inside it, peppering them with arrows for good measure. Thwip, thud, and what was once a swamp of slimy daemons is now a treasure trove of sparkling loot. After the pillaging is done, I set out to meet the next unwitting gaggle of Nurglings – the minor daemons of Nurgle the Plaguefather, as Warhammer fans will know – to do it all again.

It’s in moments like this that Warhammer: Chaosbane shines, thanks to the sparkling ARPG gameplay at its core. Minions feel fun to fight, but the variety of ways in which you can chop them down adds an irresistibly personal touch. There are three more classes to pick from besides the Wood Elf, each with unique personalities to endear themselves to you. There’s a Dwarfen ‘Slayer’ for those who like to get up close, a High Elf Mage for those fond of magic, and an Imperial Soldier if you’re the type to tank damage.

Just like the Wood Elf, they all have archetype skills, too. The Slayer can throw himself toward enemies, the Mage can steer his own magical projectiles, and the Soldier can interrupt enemies or brush them aside with a shield bash. Each class also comes with mob-clearing super abilities that you charge up by defeating enemies and collecting the red essence they might drop. 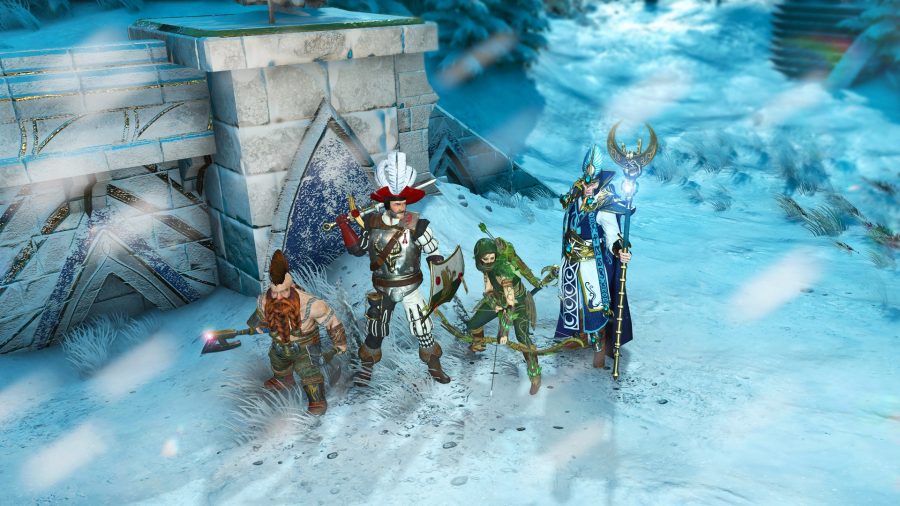 What makes these characters truly yours, however, is the flexible control you have over their build. You can use six abilities at any given time, and unlock more to choose from as you go. Part-way through my adventure with my Wood Elf, I get rid of one move so I can bring in a throwing knife that slows enemies down, which proves useful for bosses and more tankier foes.

The God Skill tree adds further depth. It is split into branches, which are further divided into nodes, each of which levels up your base stats, grants new abilities, and strengthens current moves as you unlock them. Canny players will find exciting ways to complement their chosen tactics through this tree: as I near the endgame, I find a perk that causes enemies I have slowed to take further damage from my summoned creatures.

The God Skill tree is also a good representation of developer Eko Software’s pitch to hardened ARPG fans while also appealing to those on the fringes of the genre. The upgrade system works a lot like Final Fantasy X’s Sphere Grid or Path of Exile’s passive skill tree, but isn’t anywhere near as daunting. The God Skill trees feel more streamlined, with enough nodes to offer flexibility, yet not so many as to overwhelm you with endless options.

This accessibility permeates Chaosbane, even extending to the ways in which your foes attack. Incoming attacks are generously telegraphed, so you’ll have plenty of time to react. It’s a design decision that does take some of the challenge away from the game compared with its rivals, but enables a different kind of thrill, as you charge your way through hordes of hapless daemons without a care.

Each area feels lovingly crafted, with references to Warhammer Fantasy and the Chaos Gods

Aside from its gameplay, Warhammer: Chaosbane has cribbed a little from Diablo in other, less obvious places. Dungeons are dimly lit with moody colour schemes, and your shadowy enemies will transmute into piles of sparkling loot when defeated. Once you’ve assessed and equipped your plunder – your character slightly shifting in appearance to reflect your new gear – the loop repeats.

Lulls in this loop are also pleasant, but in a different way: each environment feels lovingly crafted, with geeky references to Warhammer Fantasy and the Chaos Gods. The beasts I fight in Nuln’s sewers are followers of Nurgle, the god of plague, despair, and death, and his personality is reflected in the environmental design and that of his followers. The sewer is rife with dirty tones of green and brown, and is filled with sacks of puss, piles of waste, and other signs of infestation. Nurgle’s followers also appear as an array of disease-ridden abominations – some will pop when you kill them, infecting you with poison if you stand too close. 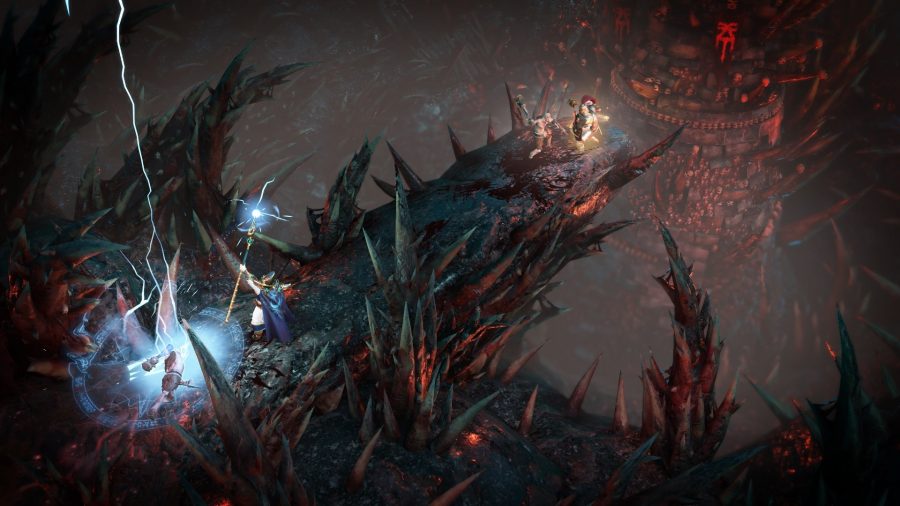 Nuln’s sewers stand in stark contrast to the other places you’ll visit. When you arrive in Praag at night-time, you’ll find a broken city in the grip of winter, making for a grey, gloomy sight. This is then drowned in bursts of luminous red as the followers of Khorne – god of rage and war – arrive on the scene. Khorne’s followers behave differently to Nurgle’s, too, charging at you like berserkers in the grip of bloodlust. The remaining two Chaos gods, Tzeentch and Slaanesh, also have distinctive daemons to kill and distinctively warped effects on their surroundings.

The story that weaves it all together feels thin at times

The story that weaves all this together, however, feels thin at times. The Great War Against Chaos – a major event in Warhammer canon – has just been won, and its triumphant hero, Magnus the Pious, has been attacked by a mysterious foe called The Harbinger. You don’t have any interaction with Magnus, nor is his character fleshed out – at least, not in the base game. Nevertheless, it’s decided that the people can’t know that their beloved war hero is barely clinging to life, so you set out to undo what’s been done.

Throughout your journey, you’ll visit different towns and meet various people, each demanding favours to earn their trust. Some will leave an endearing impression – such as a man who yearns to know what happened to his son. Others, however, send you back into the local city over and over again on repetitive missions, which winds up stalling the plot for too long. One elderly fellow stands out, sending you on numerous fetch quests to get a book, a map, and a key. Before he fulfils his side of the bargain, he randomly disappears, and the man in his place sends you on yet another fetch quest to find out what happened to his friends. It can get pretty maddening.

Some static story beats aside, Eko Software’s Warhammer-based take on the ARPG genre succeeds in plenty of smaller details – be it the little nods to Warhammer, a streamlined but balanced character progression system, or its devilishly fun power fantasy. There isn’t anything substantially new here, but Warhammer Chaosbane is an endearing celebration of its influences nevertheless.

The mission design and story can grate at times, but this is a devilishly fun homage to Diablo 3 and Warhammer Fantasy you’ll want to get your friends in on.