Until I played the closed beta, all I’d seen of Warhammer: Chaosbane was two short demo sessions. I was impressed by developer Eko Software’s realisation of the game’s characters: the tanky Empire Soldier, spellcasting High Elf mage, and fiery Dwarf Slayer all deliver distinct power fantasies, feel great to play, and offer synergistic skills to a team while also being viable solo.

But I was left with two major questions: the first was regarding the mysterious fourth character – a Wood Elf – and the second was how Eko would bring them all together with a coherent story.

Those questions are now answered. Chaosbane opens with two cutscenes comprised of wood-carved storyboards. One introduces my character: the Wood Elf, Elessa, is a ‘windborne’, one who yearns for adventure away from their forest home of Athel Loren. Her elders have indulged her by letting her scout for the army of Magnus the Pious, the hero who reunited the Empire and led its people to victory in the Great War Against Chaos – a little under two hundred years before Chaos eventually won and destroyed the world.

As the second cutscene indicates, Chaosbane starts almost immediately after Magnus’s victory. We’re recuperating in Nuln – then the capital of the Empire – when the city is attacked by a cult loyal to Nurgle, the Chaos god of decay, and no less a figure than the High Elf Archmage Teclis orders me into the sewers to kill hordes of daemons. While he, one of the most powerful wizards in the Warhammer universe, has some important standing still to do in his tower. 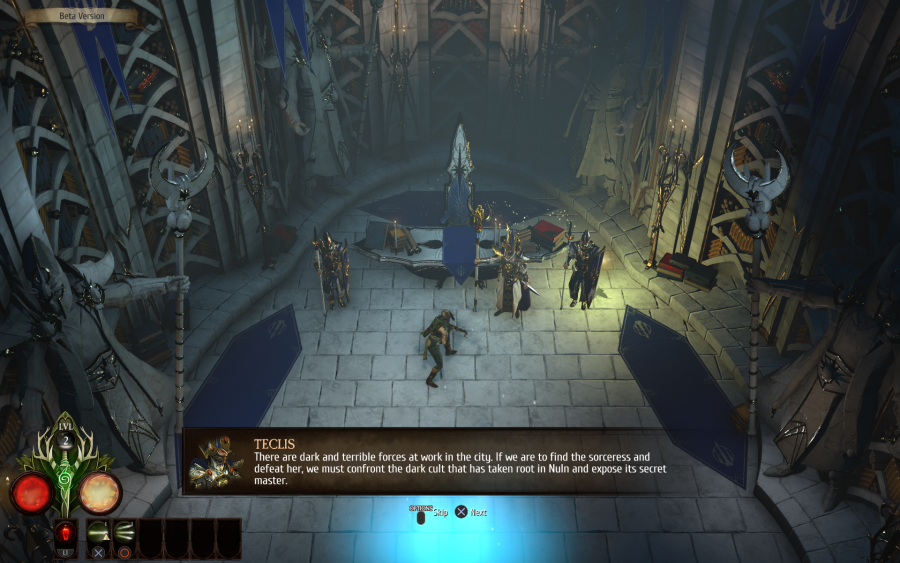 Elessa is as fun to play as her peers, delivering another distinct power fantasy. Think Legolas from the battle at Amon Hen: tapping the action button fires an endless stream of arrows, each with a satisfying thwap, underpinning combat with a punchy beat. There’s a generous auto-aim, and arrows occasionally bounce into other targets too, so you’ll kill far more Nurglings and Chaos acolytes than you might expect. Elessa feels splendidly lethal.

As with other heroes, it’s easy to see how Elessa’s skills will complement the team. Elven Shot fires arrows in a conical spray, with a chance to slow enemies on hit, delaying their advance toward the ranged characters and serving them up to the vicious Slayer.

Spinning Blades is a projectile that bounces off walls, making it an ideal tool for shredding tightly-packed enemies. And since Nuln is full of corridors and tunnels, this skill can turn it into an abattoir, provided you throw it where you intend. It’s trickier to aim than the regular attack, and more than once mine bounced harmlessly off a wall rather than going down the adjacent corridor. It’s a bit of a skillshot, which teaches you to concentrate, and delivers a nice payoff when you nail it. 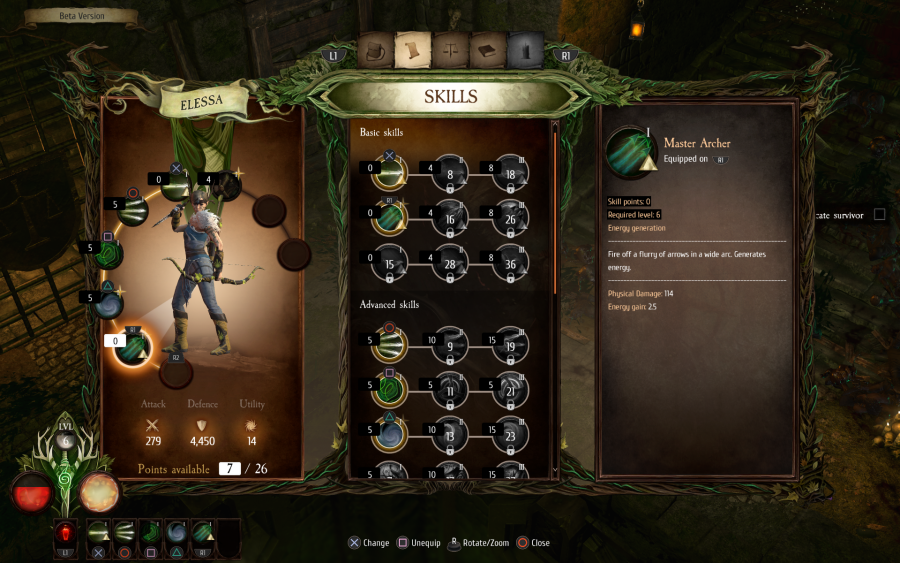 Then there’s Spiral Cut, which throws a dagger in widening spirals around Elessa. It’s ideal to drop in the thick of the fighting, especially if you can keep the enemy pinned there – the Soldier excels at this if playing with a team, but Elessa herself can summon a tanky Dryad to do the job even when playing solo, as I have been.

Eko has made sure to give each character class its own satisfying feel. The Slayer, for example, skips the traditional heavy plate armour you usually see on dwarfs and opts instead for a pair of axes chained to his forearms, which he can use to hook himself to enemies and initiate fights.

Elessa is fragile, so you don’t want her to stay in melee for long. In lieu of allies to keep the hordes of Chaos distracted, I’ve been relying on her dodge-roll, which passes through enemies and carries her a decent distance. It’s an excellent escape tool. A final skill which fires a flurry of arrows, regenerating my energy in so doing, is the final incentive I need to use all these skills pretty liberally, though it’s still important to deploy the right attack at the right time.

Solo play as Elessa, then, looks like this: pepper an oncoming horde with arrows until Elven Shot will hit a decent number. Wait for them to get close, summon a dryad, and drop Spiral Cut. Roll back – ideally into a corridor – and throw Spinning Blades. The High Elf, Elontir, may share the role of ranged attacker, but he’s less mobile and his abilities cost more energy. In comparison to him, I feel agile, tactical, empowered.

This feeling has been fostered by the gentle introduction of my skills over the first half-dozen character levels or so. Chaosbane’s onboarding isn’t flashy, comprised as it is of simple pop-ups, but it does the job. I understand what I can and cannot do when playing solo, and what my role will be in a team when the time comes. I am ranged DPS, add clearance, and a touch of crowd control.

This clarity is important in a genre as mechanically deep as the loot-fuelled ARPG. A friend has tried to get me into Diablo III a few times now, and I’ve bounced off each time because his well-intentioned efforts to explain my mid-game character build were more effective as a lullaby than a game primer – and this is from a strategy fan who usually loves deep systems in games.

Related: Go on an adventure with the best RPGs on PC

But I’m in on the ground floor with Chaosbane, and it looks like it’ll deliver comparable depth: you have more skills than you can equip, each of which has several levels. Loot is, of course, showered upon you, boasting a range of perks and stat effects, and is equipped across no fewer than ten slots. In the tower that is your headquarters, locked vendors tease the endgame offering, which will presumably test your theorycrafting skills – there’s a loot recycler, dungeon re-runs, and a boss rush mode. 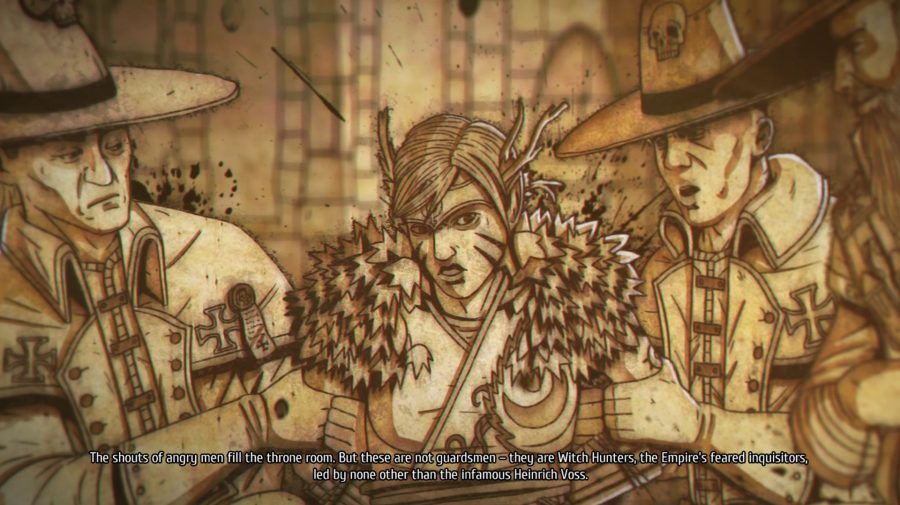 It’s too early to say how that’ll shake out, especially as it does look a lot thinner than Diablo III’s endgame. But Eko Software is not Blizzard, so that’s probably an unfair comparison – even if it’s one that the genre invites. There’s at least one other thing I’m still not sure about, notably the voice acting – Elessa is bright and squeaky, which sort-of makes sense for a juvenile elf, but can get a little grating. Teclis by contrast is deep and manly, which doesn’t really fit the weedy nerd he is in the lore.

Nonetheless, Chaosbane is worth keeping an eye on. If nothing else, Eko Software has nailed the four core characters, and that’s at least one essential ingredient done right.