I love killing rats. I like hammering them in long sweeping arcs so their bodies fly from side to side like a fleshy Mexican wave. I like shooting rats too, emptying both of my pistols into a horde, only to see more clamber over their fallen brethren, the press of rodent bodies surging forward. Sometimes I like to chug back a potion of speed and run down a tunnel, windmilling my axes, like a medieval reaping machine running on jet fuel.

But there’s much more to Vermintide 2 than killing rats. However, if you’re not familiar with the game’s source material, much of this underlying brilliance may pass you by. The most recent DLC, Shadows Over Bogenhafen borrows heavily from the Warhammer Fantasy Roleplay book. It’s not the first Vermintide DLC to do so, either: Death on the Reik, Empire in Flames, and The Enemy Below all get their names from the classic 1980s Enemy Within campaign.

In that series, a set of heroes from different races travel the Empire, making friends, battling Chaos, and generally getting into trouble – yet, at the same time, they inadvertently save the Empire. Sound familiar? It’s a much beloved series, praised for the depth of its scenarios, but the true excellence of The Enemy Within lies in the stories found at the ground level, where politics bludgeon peasants, and you can move in to swoop them out of the mud. Vermintide 2 is among the few Warhammer videogames to honour that.

CORRUPTION IN THE REIKLAND

The Enemy Within books mainly act as a magical mystery tour of the Reikland and its inhabitants. You meet greedy merchants, down-on-their-luck beggars, power-hungry bandits, and nobles haunted by demons. You also encounter the many factions dwelling within the province, whether that’s the bandits and Beastmen who hide in the forest of the Reikwald, the pirates who ply their trade on the waterways of the Reik and Bogen, the Goblin Wolf Riders in the hills, or the Skaven who burrow insidiously beneath searching for warpstone.

Just like the characters from The Enemy Within, The Ubersreik Five are folk heroes - Robin Hoods of Reikland

One of the central themes in the series is the corruptibility of mankind. You see repeatedly how unchecked desires lead individuals to Chaos, especially the upper classes, who in their excess and lust for power are already twisted by malevolence. The result is the suffering and disenfranchisement of the common people, which Vermintide 2 also explores thoroughly; rulers refuse to believe in the Skaven while nobles lock themselves away from the outside world, indulging in lavish parties. The poor suffer while the rich either care nothing for the people’s troubles or, instead, fall to the predations of Chaos or Dark Magic. Who is left to fight for the little guy? The Ubersreik Five are. 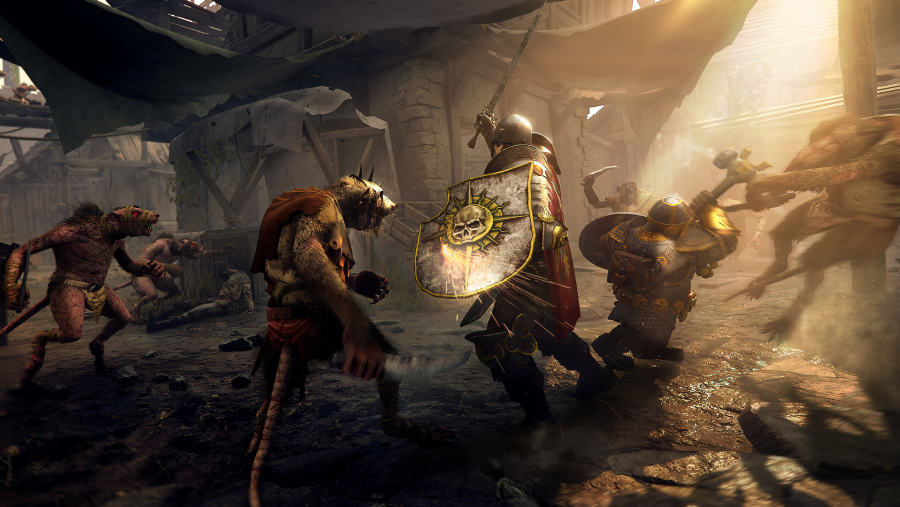 Vermintide 2 has you play as one of this merry band of heroes, clearing up after the foul and uncaring – whether that’s the apathetic merchants of Bogenhafen who continue to celebrate Schaffenfest while the poor are slaughtered across the river, or the two-faced Baron Justus Francke of Ussingen, who had secret dealings with Nurgle cultists before they burnt his town to the ground. Or even ‘The Society of Harmonious Growth and Splendour’, which was the part of the Nurgle cult that got their orders from Burblespue Halescourge, who no doubt promised riches and power for their role in the destruction of Helmgart. Just like the characters from The Enemy Within, The Ubersreik Five are folk heroes – Robin Hoods of Reikland, a grassroots band representing the Old World races, who actively fight for the people because no one else will. They belong to no organisation – even Saltzpyre is a rogue Witch-hunter, cast out for trying to convince his superiors that the Skaven are real.

These aspects of the characters are reflected in the careers system. In The Enemy Within, there are careers instead of classes, the main difference being that a career is a progression of skill justified by the narrative. You can see this idea translated in Vermintide 2 through the three distinctive careers mapping out the possible responses each of the heroes can have to the events of the first game. Saltzpyre’s Bounty Hunter, for example, is a narrative in which his disillusionment with the Witch-hunters causes him to break out and go fully rogue. Kruber’s Huntsman is a return to his roots (we know he worships Taal, god of nature) as he becomes a hunter again. Alternatively, Kerillian’s Shade and Bardin’s Slayer show us a version of the timeline in which their shame and exile lead down a darker path.

The man with a plan

Who is the mysterious Franz Lohner - landlord of The Red Moon? He was a member of the Emperor’s Eyes, used to have a magical sword, was friends with a Vampire, and met Karl Franz. Given all that, it’s likely that he is actually Morgan Bernhardt, ex-commander of mercenary army, The Grudgebringers, who features in 1998 PS1 game Warhammer: Dark Omen. Don’t ask him about it, though, he’ll probably just laugh at you.

Each level in Vermintide 2 begins much like part of a roleplaying campaign, with pub landlord Franz Lohner describing a scenario to the heroes, almost as if he were the game master. One of the staples of traditional roleplay is the ability to approach scenarios in different ways, and while Vermintide 2 restricts these approaches to just combat, it gives you the tools to make decisions. You can choose to avoid a patrol of Stormvermin or you can face them head on. You might try to lure a boss away from your comrades or choose to let them bear the brunt of the heavy attacks while you heal. The split-second decisions you make in combat, and how you harness your abilities, is what leads to victory or defeat (especially on the higher difficulties), but the application of each unique character is what creates that improvisational tone so akin to party-based roleplaying.

Investigation and the unravelling of mysteries are also important components in building scenarios that allow for improvisation. In Shadows Over Bogenhafen, for example, a sinister, Empire-ending Chaos scheme is only discovered accidentally while the heroes are searching for a mutated goblin, which has escaped from a nearby freak show. If you think of how the levels in Vermintide 2 are presented you’ll begin to realise how many of them are investigations. Lohner says something like: ‘There’s a strange thing going on down that hole, go have a look will you?’, and all the heroes nod enthusiastically, jumping in weapons raised, like the rat-bashing psychopaths we know and love. That could be a warehouse full of plague-infested food, a Chaos ritual, or a corrupted Elven lodestone – whatever it is, these ‘investigations’ are what create the suicidal and often absurd situations our heroes find themselves in. 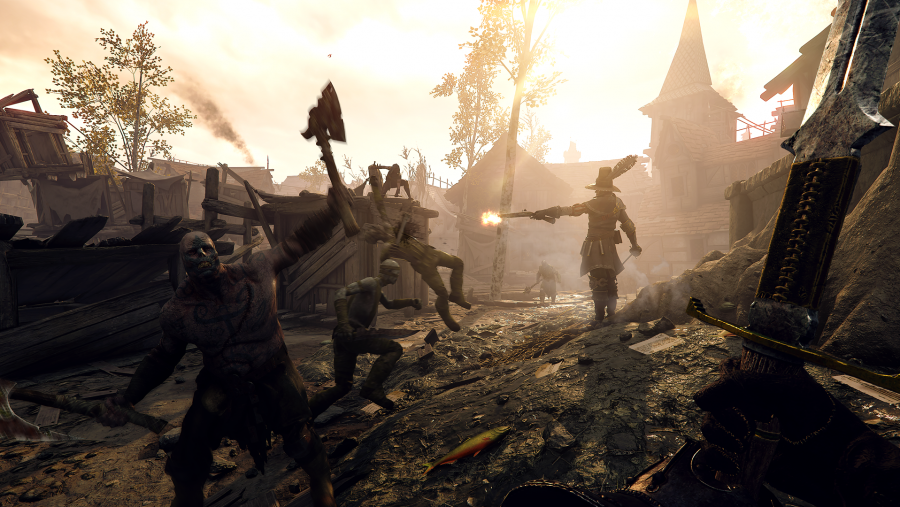 What makes this feel especially true to the Warhammer world is the gothic absurdity that Vermintide 2 carries over. The Enemy Within campaign goes as far as to warn players not to take anything too seriously and the same gesture seems to permeate Vermintide 2. It could be Kerillian’s banter and disdain for all ‘lumberfoots’, Bardin’s wonderful singing voice, or Saltzspyre’s immortal invocation of Sigmar to “BLESS THIS RAVAGED BODEH.” If you’re chuckling between the slaughter you can consider this proof that developer Fatshark has understood the source material and added the necessary humour to offset the rampant darkness that, together, forms much of the Warhammer identity.

The perspective videogames often give us of the Warhammer Fantasy world is a grand one due to the strategy game formats to which it’s so suited. Other authentic, modern games like Total War: Warhammer can only ever show us the big – world-ending conflicts and the race-shattering betrayals. But they can’t go near the small scale, not the people who populate the world, nor those who eke out their existence upon its surface.

This is the perspective that Vermintide 2 channels due to taking its cues from The Enemy Within, showing us the personal, the grassroots, the folk. These heroes won’t win the war by themselves, hell, they won’t win the war at all – Sigmar is rightly quoted as saying ‘There can be no victory. The darkness always returns’. But they’re fighting, they’re doing what they can, what any good person would do under the same circumstances. They’re exiles, oddballs, they have all experienced loss; whether honour, faith, hearth, or family. In the end, all that’s left to them is to stand against the rising tide – what else can heroes do?