Mages have a pretty sweet scam going on. They cause all sorts of devastation: summoning dragons, reanimating the dead and forcing them to fight, setting off all sorts of ecological disasters. It’s properly awful stuff. But they’re also the only big brains capable of cleaning up the messes they create. So nobody takes a moment to consider the fact that, without mages, life would be a lot easier.

In Warlock II: The Exiled, the residents of Ardania and the floating shards – remnants of magically destroyed worlds – really should know better than to let mages do what they want. Ino-Co Plus’ 4X sequel pits mage against mage in a war to wrest control of Ardania from the iron grip of the United One, an all powerful mage and dictator for life. The result: a constant stream of catastrophic magic that makes everything a whole lot worse.

And underneath the world-shattering magic spells and impossible armies is a game that is better than its forebearer – the rather good Master of the Arcane – in every way. It represents a change in 4X design that’s as evocative of a grand roleplaying journey as it is other fantasy strategy outings.

Warlock II will feel familiar, at least to start with. That because it wants to ease you into the (great) changes it’s made to the 4X strategy model. Factions are represented by powerful mages and their even more powerful spell books, and these men, women, lichs and giant rats spread their influence by dropping down cities, exploiting resources and commanding ridiculous armies filled with ogres and mechanical monstrosities.

The 4X tenets are all given equal weight, but what drives them is where Warlock II deviates from the past. Where Master of the Arcane, and most 4X games, offer an open sandbox with expansion possible in all directions and limited guidance, Warlock II is an epic – and epically tongue-in-cheek – journey across a multitude of different but magically linked worlds. It’s a journey that informs all other aspects of Warlock II. 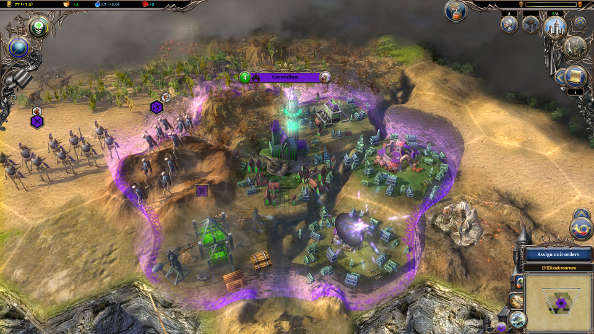 As one of the great mages from the original game, players are tasked with hopping across the remains of the worlds destroyed by that game’s villainous monsters in an effort to reach Ardania and rescue it from the traitor mage. It’s not a game of conquest or empire building, even though both of these options are present. Rather, conquered and constructed cities represent links in a long supply chain spreading from the most distant shard, across the cosmos and eventually back to Ardania.

This overarching goal gives Warlock II impressive momentum, with almost every turn feeling like progress. The progress takes different forms. It might be the researching of a new spell that will finally make it possible to annihilate a city blocking the only route to the next shard. Or it could be an alliance with another mage, peacefully removing a threat from another realm. And there are quests – some throwaway, merely kill x or build y, netting mages some gold or mana, while others are connected to the story, but still only task mages with killing a unit or discovering an area. Some at least offer multiple choices, but they are pretty arbitrary and are frequently repeated.

The sundering of worlds into little – though some are not so little – floating shards has a tremendous impact on strategy. These islands are linked together by a network of portals. Before units travel through these stargates, what’s on the other side is a mystery. It could be filled with gargantuan snow-capped mountains, making the shard difficult to navigate; a dead world rife with skeletons and plague; a gorgeous, perpetually autumnal world controlled by another mage – the only way to know is by taking the risk and jumping through it. Different shards appeal to different races. Undead units will have a tougher time making their way through a shard that’s covered in magical, life-giving forests, while other units might struggle to navigate the noxious, cused dead shards.

And the portals can be controlled. A mage who expands their territory to encompass a portal can halt invaders thanks to fortified towers and stalwart fortresses, hampering other mages’ freedom of movement. Keeping on eye on these gateways is key. Progression through the various landmasses is not linear, not a straight line to Ardania. Some portals will connect to the home shards of other mages, and there are multiple routes to the finish line. So enemy mages will send invading armies in the opposite direction of the main goal, usually to take out the competition. 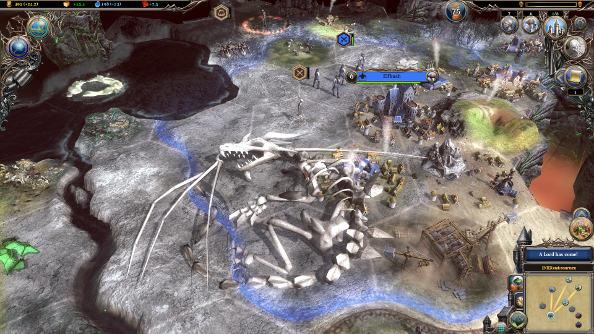 Exploration is rewarded. It’s entirely possible to just build a few cities on the first shard and then march armies through the portals, straight to Ardania (though there are quests that must be fulfilled along the way), but that will leave mages without many resources, the power they need to defeat the United One.

The journey is as much about discovering new worlds as it is getting back to Ardania. Spreading influence into new shards means more resources to build on top of, more space for settlements that generate gold, mana and divine reputation with goes towards the construction of massive armies and the casting of apocalyptic spells. Even after 200 turns on the smallest maps, there’s still more to discover.

But for all of Warlock II’s freedom and diversity, much of it is defined by limitations imposed by clever rules. A mage may only construct a handful of cities before the population gets restless. Research expands the number, but at maximum it’s around eight. It balances the game, ensuring that mages can’t just throw down countless cities and spew out troops and unlock all the units they need in the first few dozen turns. But more importantly it forces players to make hard calls. Often I found myself going back and forth: “Do I destroy the city of Boneburgh so I can build a new city near these magical ruins? Or should I keep Boneburgh because I’m only a few turns away from building some undead dragons?”

Autonomous settlements offer more options besides destroying one city to build another. They don’t go towards the city cap, but nothing can be built in them, nor does their influence expand. They are split into free towns, which generate gold; forts, which can be used to protect bottlenecks and portals; and religious settlements, which generate mana and reputation with a specific god. Any city can be transformed into one of these autonomous settlements, other than conquered ones, which can only be destroyed or maintained. 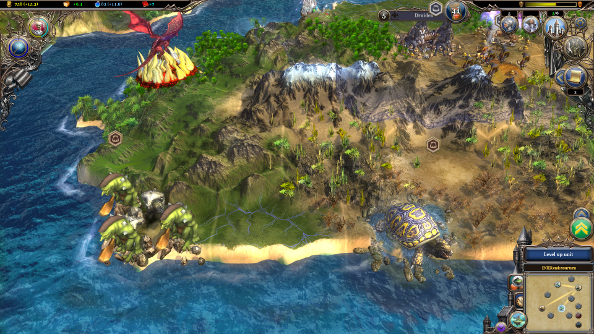 In other areas, balance hasn’t been given the same consideration. But I’m not certain that this is a bad thing. Wandering NPC units, which spread across all shards, spawning out of caves, bases, palaces and other buildings that can be destroyed, can be just as dangerous as enemy mages. These unaligned monsters, as a rule, get more powerful the closer they are to Ardania, but quite how powerful they are seems based on the roll of a die.

After razing countless cities, defeating enemy mages with the power to summon volcanos and planting my flag on a half dozen new worlds – my entire army was wiped out by wandering monsters. Three Lords – Warlock II’s strong hero units – crossed over from a verdant jungle shard into a lava world. Behind them was the might of my undead, giant and goblin army. One by one, they appeared in the new world, each occupying a single hex.

The problem was immediately obvious. The portal had been constructed on a promontory, leaving little room for my troops to move. They were all blocking each other, and the terrain was rocky, slowing progress even more. But I also commanded a great red dragon and a flying ghost ship, both of which could sail over the rugged terrain. One turn later and both flying units were gone, assaulted by an enormous gold dragon and three units of shadow dragons (each containing two dragons). These were beasts that could one-hit even my most powerful warriors.

Warlock II isn’t afraid of ruining all of a mages’ plans and then laughing right in their face. In my case, it became impossible to progress the way I had intended to without expanding my network of cities in new directions, finding ways to unlock stronger, better units before taking on the dragons again. But that was not the only option. The game is won not just by reaching Ardania. Wiping out the competition or casting the spell of Unity – the same spell the United One cast to make him the ultimate power – are also valid victory routes. And neither are particularly easy paths, potentially requiring the same amount of effort as reaching Ardania. 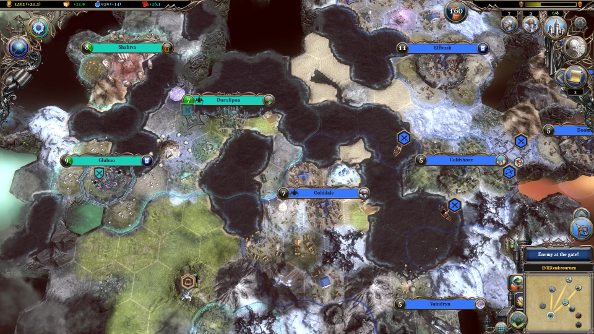 The game looks wonderful, filled with colour and diversity, and it’s undeniably big, but none of that really explains why it’s such a massive system hog. It made my rig run hot, constantly, and while I’ve been lucky to only witness a couple of crashes, memory leaks and overheating have caused problems. Alt-tabbing also causes a mess, and it’s best not to do it. It’s improved since launch, but remains a surprisingly hardware intensive game.

The shard-based game is more than enough to recommend Warlock II. It’s simple to grasp but curve balls and angry demi-gods with a penchant for punching cities should keep mages on their toes. And everything can be tweaked. The editor is magnificently extensive, laying out the whole game, from spells to buildings, and allowing players to change it all. Everything can be modified or entirely new versions made. Lamentably it’s impossible to make units mute. The limited voice acting is so bad that I just had to turn the audio off in the main menu, instead opting to listen to the entirety of Blind Guardian’s Nightfall in Middle-Earth on repeat.

Warlock II might take place in a silly universe where narrators like to impersonate Sean Connery and kingdoms are ruled by regal rats or chatting skeletons, but Ino-Co has taken its construction very seriously. It’s exactly what a sequel should be, keeping the spirit of the original but improving every aspect.