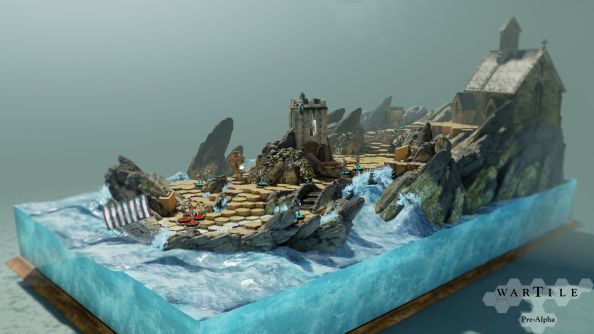 Some of the very first game designers were tabletop wargamers, and as soon as PCs had any processing power to speak of they began adapting their favourites – not just the rules and character sheets, but the imagined outcomes; the real-time battles that unfolded in their heads as the dice rolled.

Enjoy the influence of the analogue? Here are the best strategy games on PC.

Yet now that dragons fly flawlessly above Skyrim and horses canter through The Witcher’s exquisitely rendered swampland, they find they’re not ready to set aside the die-cast models for good. There’s something to the craftsmanship of miniature worlds, the evocative poses of tactile figures, that they’re not prepared to let go of. That’s worth recreated in the digital realm.

Nobody knows that fact better than Playwood Games’ Michael Rud, who comes from a background of ceramics and glass at the Danish institute of design. Over the past two years he’s led his team in the assembly of beautiful dioramas – tiny rectangular levels cut in cross-section, in which the ocean splashes as if against the invisible walls of a glass case. Wartile’s levels are like the scaled-down film sets that saw Ridley Scott loom over The Nostromo and Peter Jackson tower above Rivendell like a lost troll. 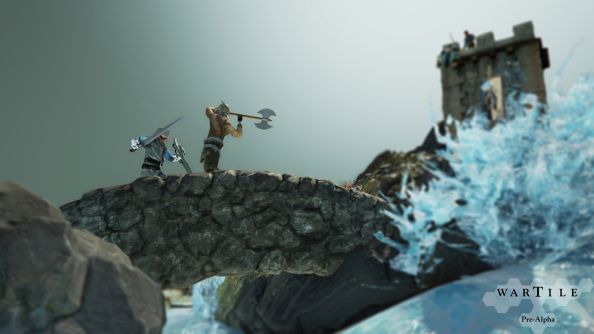 Players are invited to reach into Wartile’s worlds and direct miniature men in small-scale skirmishes. The vikings emerge from the sea like primordial organisms, looking to take Scandinavian and English towers and churches by force.

“I’ve always loved computer games that have tried to replicate or been inspired by something that looked real,” says Rud. “I’ve been collecting and playing with miniature figures since I was a child, painting them myself and making these landscapes out of real assets.

“There was a clear opportunity. Because the Unreal 4 engine has such a strong renderer, it’s really possible to create a computer game [where] you look through a small window down into this physical world.” 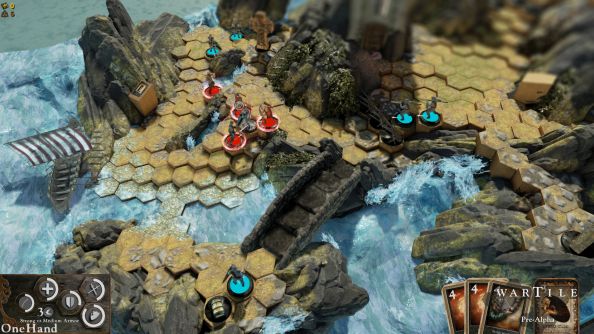 Fights are real-time, but thoughtfully-paced – every time you pick up and move a figure a few tiles, a cooldown prevents you from touching it for a few seconds. Controlling four or five vikings at a time, you’re flitting back and forth, micromanaging their movements and picking strategies when they get into scraps. There’s enough space for players to throw in ability cards that can change the outcome of a battle. Wartile is about action and reaction.

“It was important that you had this flow where you always had something to do, some card to play,” explains Rud. “We use the comparison to chess without turns – you move a piece and press a clock, it’s the same. You move your arm from the board and then move again.”

Like many PC gamers who grew up in the early ‘90s, Rud was captivated by the violent comedy of Battle Chess – as well as the holographic game of Dejarik played aboard the Millennium Falcon in Star Wars – and the same sense of character informs Wartile’s animated pieces. After every attack, the fighters return briefly to their rigid starting pose, as if it defines them. There’s a semblance of self-awareness there; these vikings know they are models. 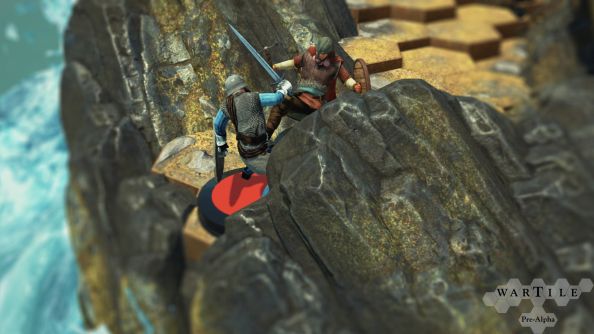 “We hope to add some personality to them,” says Rud. “For example, if you take a light figurine and pull it towards a heavy brute, we’d like very much for the figurine to complain: ‘Oh no, that’s not a good idea.’”

The hexagons that divide up the battlefield and lend Wartile its name are another hangover from turn-based wargaming. On the tabletop, they’re a necessary part of the abstraction, handling the illusion of movement over time. In real-time they seem more of an indulgence – but when Playwood took them out during development, “it became a mess”.

“The maps looked good but they didn’t communicate well,” recalls Rud. “So we brought back the tiles. Now, the moment you see a man and the tile, you know where you can go, it’s very clear.” 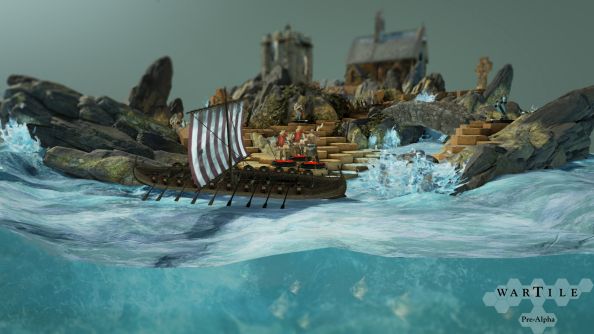 Somehow, the hexes look natural, too. Blending into bridges and sinking into the sea, they resemble the interlocking basalt columns of Northern Ireland’s Giant’s Causeway. And they help sell the fantasy: that this is a clockwork world, ticking onwards, and you’re reaching in to fiddle with the mechanisms.

In this sponsored series, we’re looking at how game developers are taking advantage of Unreal Engine 4 to create a new generation of PC games. With thanks to Epic Games and Playwood Project.