Looking for the best Wasteland 3 builds? If you’re buried in the latest Wasteland game, you may need a hand picking out a lethal squad for your expedition across post-apocalyptic Colorado. You can have up to six people in your squad, including two companions and four rangers. Rangers can be recruited from Ranger HQ by finishing the tutorial and you can always return to recruit new rangers throughout the game, so don’t worry if someone’s not working out – or if a squad member kicks it.

Choosing your Wasteland 3 skills can seem vital to survival at the beginning of the game, but you don’t need to spend them all at once, and we suggest waiting until you get to Ranger HQ and get a squad you want to invest in. Of course, we found that some skills are much better than others; ones we couldn’t survive without, and ones we didn’t utilise much. You can also find Wasteland 3 companions in various locations on the map that are willing to join the Desert Rangers and come with a pre-built set of skills, an ‘in’ with certain factions, and sometimes a special weapon.

When forming your crew, you also need to think about the skills you need to bypass certain checkpoints around the map to progress the game, such as repairing a machine to get through a door, lockpicking a safe, fleeing from a fight, or convincing a rogue adversary you’re ill-equipped to take on, to back off instead.

Who should you have in your Wasteland 3 party?

When building your Wasteland 3 squad, you want to have a variation of damage types and specialities, especially as different situations you encounter call for it such as fighting mechs, or taking on large mutated bears. This goes for fight locations as well, whether that’s being hauled off the road by the bloodthirsty Dorseys, or taking on killer clowns in an underground and very eerie maze of tunnels. But, if you need a build that’s ready for every occasion, here’s our recommended and best Wasteland 3 builds for each character and who you should have in your Wasteland 3 party including beginner perks, and the main attributes you should build on. 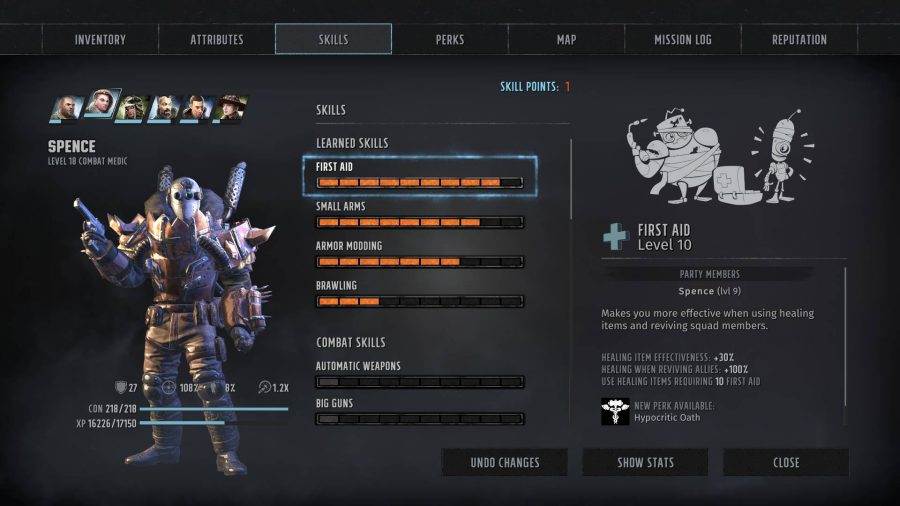 Building up in Coordination means you have a lot of AP to play with, which you’ll need in order to get around as the designated field medic. It also means you’ll be nimble in travelling long distances, taking a close range shot, and retreating to safety. Armour Modding is another achievable benefit of this build, more so than Weapon Modding where most mods require around 10 skill points.

In your journey through Colorado’s many, many areas, you’ve probably discovered the sheer amount of doors, crates, and safes – most of which can only be opened by lockpicking. You can always chuck a grenade or launch an explosive, but lockpicking is a lot quieter, and means avoiding any unnecessary fights and wasting valuable resources. Hard Ass is also another skill you need for the gatekeeping dialogue checks to keep you out of trouble with rowdy gangs and tougher crowds. 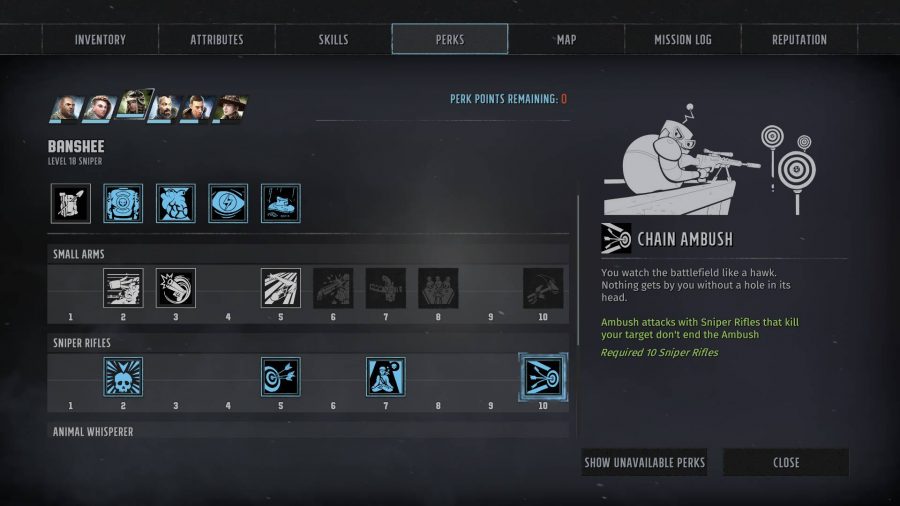 Snipers are a must for your Wasteland 3 build, and paired with Survival andSmall Arms, can adapt to most situations. Many rangers come with Animal Whisperer equipped to Snipers which gives you the ability to charm hostile animals in battle, but you have to be in very close proximity in order for this to work, and even so, it won’t work on higher difficulty animals. It’s also not massively useful equipped on Snipers either, due to their range from hostile threats, but you can get some use out of a few skill points invested in Small Arms. Survival is also another massive must for traversing Wasteland’s open-world, and gets you out of sticky situations if you’re jumped while roaming in the Kodiak with few supplies and a wounded squad.

The ‘big guns’ in Wasteland 3 don’t always pack the punch you need them to and we found flamethrowers were much more reliable (don’t worry DoS fans, it’s pretty contained). Mechanic is also another necessary skill to bypass little traps or fix machines to gain access to rooms. Toaster Repair is just a nice bonus, if you just happen to come across a toaster that needs repairing, duh. You also want to build up in Mechanic Perks, when you reach Handy make sure you have deployable turrets equipped, these little guys are invaluable in a fight. 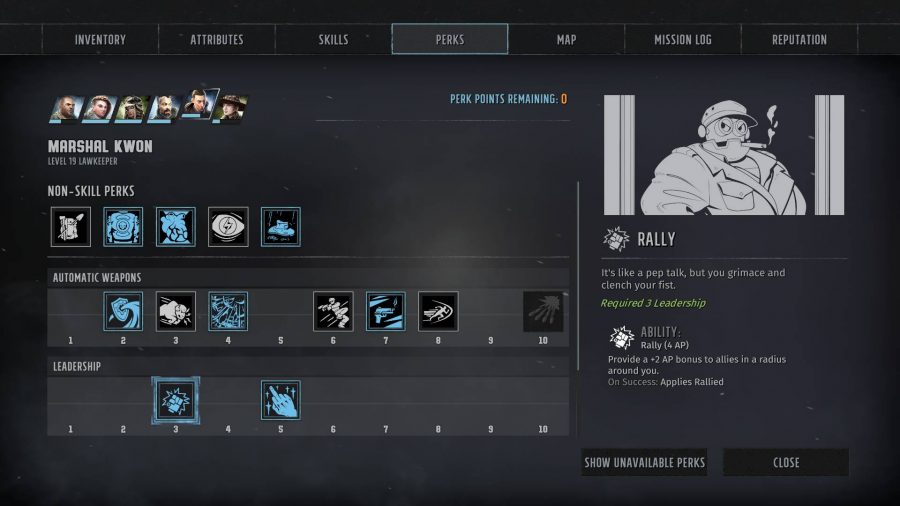 Automatic weapons are the most valuable in combat due to their versatility and high damage output, we also seem to loot more rifle ammunition than any other type, meaning we never run out in battle. Leadership improves your team’s critical strike chance and overall morale, so being a floating and flexible shooter, pairs quite nicely with SMGs and rifles. Kick Ass is another skill that comes in handy to reach desired dialogue requirements that can vastly impact the outcome of situations.

Weird Science weapons and gear provide all sorts of perks from shrinking grenades to freezing explosives. This Wasteland 3 build is interchangeable with Automatic Rifles and Small Arms, but hacking robots and computers is really handy, as well as opening up extra dialogue options. If you don’t already have a ranger build or Lucia Wesson as an early companion, Pizepi Joren can be found in Aspen, and has all these skills already equipped.