World of Darkness is a rich universe that’s been brought to life through multiple, very different tabletop RPGs. Perhaps the most familiar to PC gamers is Vampire: the Masquerade, thanks to Troika Games’ broken but celebrated videogame adaptation, Bloodlines.

Vampire focuses on themes of morality and how different ideologies affect social standing. The moon-howlers of Werewolf: The Apocalypse, however, are more focused on living in communes and working together to put a stop to a corrupt force, known as the Wyrm, which aims to defile all life. Earthblood does a good job of sticking to this theme in its narrative, but is sadly a messy mix of awkward stealth mechanics and the ill-fated 2010 reboot of Splatterhouse.

We’re introduced to the playable character, Cahal, about halfway through a sabotage mission against Endron – an unsubtly named energy company suspected of furthering the Wyrm’s ambitions. Things go wrong when Cahal goes berserk after the death of his wife, and murders his wolfy friend. After exiling himself from his pack in shame, Cahal discovers a plot by Endron to annihilate them with silver bullets, prompting him to return after five years on the road.

If the characters were in any way likeable, I could perhaps care a little more about their plight. However, thanks to some stiff, platitudinous writing, nearly everyone is an unbearably preachy, grumpy snob with a laughably gruff voice. Even the guards you mercilessly rip to shreds throughout the campaign are more endearing than the main cast. Those familiar with the World of Darkness lore will get some of the references, but the narrative isn’t of the same calibre as Bloodlines. 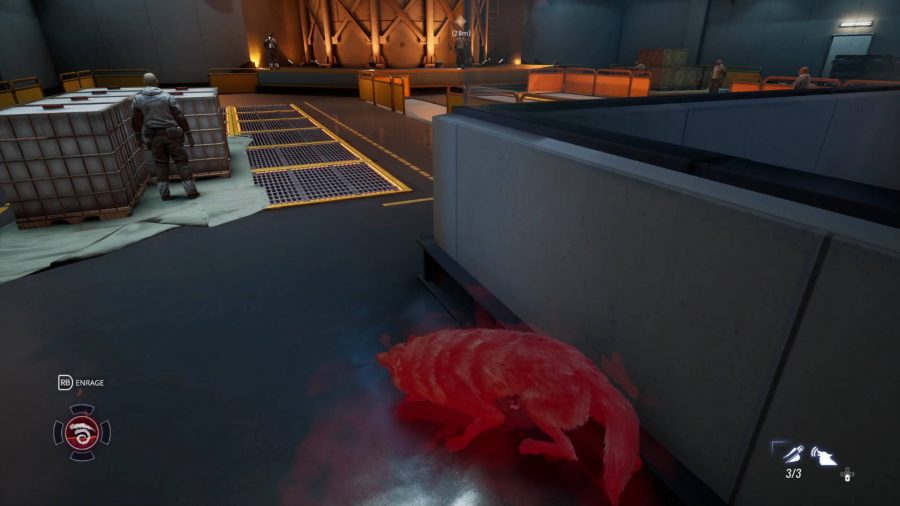 It also doesn’t help that Earthblood’s presentation is pretty dated, and not in the manner of a conscious throwback. Character animations are stiff, environments lack variety for the majority of the game, and a tiresome soundtrack repeats itself constantly. It’s pretty clear that someone really likes John Carpenter’s Halloween theme music, as an eerily similar motif (which falls short of actually being eerie) loops endlessly until you clear out each section of a level. If only Michael Myers had shown up, it would have made things much more exciting.

But the big problem with Earthblood is that these little presentational issues extend deep into the core of the game. It’s boring. Like, surprisingly boring. In every mission, you are tasked to infiltrate room after room to reach an objective. Every room is filled with different guards. Most are generic goons, but there are a couple of beefy lads with mallets and hulking mechs to avoid. That’s pretty much the entire game, and whether I was sneaking around stealthily taking them down, or transforming into a monstrous beast and threshing anything in view, I just wasn’t having fun.

I frequently had to create my own fun by toying with the easily exploited enemy AI during stealth sections, purposefully getting spotted by a guard only to have each of his mates approach me one by one for a clobbering, creating a pile of unconscious bodies without ever raising the alarm. 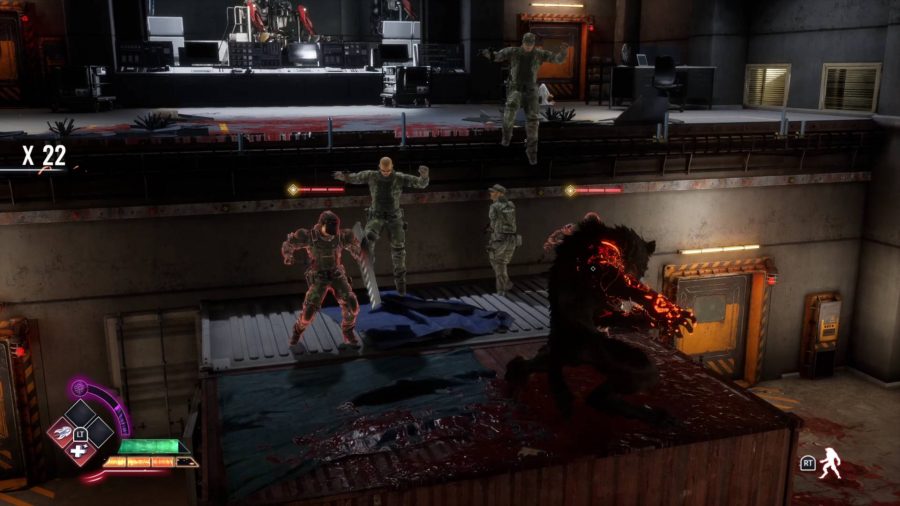 It’s not like Cahal doesn’t have any abilities to make things interesting. He can transform into a wolf to skulk through vents. There’s also the Penumbra Vision that, if your eyes don’t bleed from the piercing red hue, highlights enemies and electric devices. Aside from the fact that you’re a werewolf, Earthblood’s stealth gameplay is remarkably basic. The one redeeming feature is that the room layouts are varied enough to make me pause to think and calculate my next move.

If the characters were likeable, I could care a little more about their plight

There are no real repercussions for getting caught. Instead, I’m prompted to mash a button to hulk out, becoming a ‘Crinos’ (werewolf, to you and me). You can switch between two different stances in this state, agile or heavy. I hardly touched the heavy stance outside of the tutorial fight as it was too sluggish, and the agile stance is more than capable of tearing apart any enemy in the way, even with just the basic attacks.

That’s not to say that enemies don’t pose a threat to you. In fact, you can take damage fast, especially if you’re hit by silver bullets. However, Earthblood encourages you to aggressively butcher everything in sight as doing so refills your skill bar, at which point you can hit an insta-heal button for a big lump of heath. There are other skills, but they’re nowhere near as useful as spamming this button. 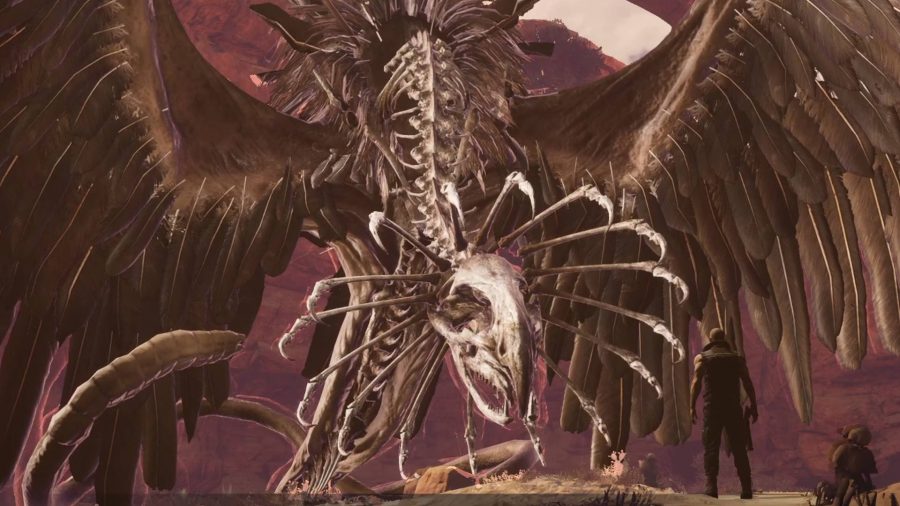 Upgrades that use Spirit Points (obtained either by completing objectives or extracting spirit energy from plants) also help to make Cahal an unstoppable killing machine, especially when entering Frenzy mode, which causes Cahal to give into his primal urges and attack wildly. I never felt like I was in any danger. In fact, on Normal difficulty, I only died once in the entirety of my nine-hour playthrough (to a boss about halfway through the game).

It’s just as well that Earthblood isn’t longer. For nine hours it’s an acceptably mindless power fantasy, but beyond that there’s really nothing to sink my teeth into. Neither combat nor stealth provide enough challenge to make me want to explore other fighting styles or to finesse sneaky routes through each level. Skills are unbalanced, giving me no incentive to do anything other than heal. Not even the side quests, which task you with finding hidden spirits or shrines in the hub world, bear any tangible rewards to make them worthwhile.

Werewolf: The Apocalypse - Earthblood is peak mediocrity and lacks any real meat to make it stand out from the rest of the pack.