At Gamescom, our very own Jeremy had a chance to sit down with Chris “Star Citizen Megabucks” Roberts and talk all things space and spaceshippy. Towards the end of the interview, Jeremy broached the question of internet opinion-haver Derek Smart and his recent conflict with RSI and Star Citizen. If you’ve not kept up and don’t feel like that lengthy read, the Cliff Notes version is Smart wasn’t pleased with the direction of the game and advised backers to contact the US Federal Trade Commission if they weren’t either. A few days later, RSI refunded his pledge and nuked his account.

Smart then spoke to us in that interview, explaining that he didn’t want a refund, he wanted “accountability.” He ended up calling for Roberts’ resignation and issuing what could be taken as threats of legal action. Naturally, we’re intrigued what Roberts had to say on the matter.

When Jeremy initially brought the subject up, Roberts crossed his arms and said, with a slightly humourous tone, “What do you want to ask me about Derek Smart?”

Jeremy asked for Roberts’ “perspective” on the situation:

“I try not to get into any of that. I think people who talk about other people’s work… I don’t know what to say, other than, if someone spent so much energy focusing on their own stuff, maybe people would like their own stuff better. I don’t particularly pay much attention to him because it seems like the more people pay attention to him… I think at the end of the day the game is gonna speak for itself, the content speaks for itself. There’s plenty of people who say, y’know, you can’t do certain things and I don’t listen to them. Especially, y’know, I mean, you have to listen to people who have actually been able to do stuff and that you respect. That’s not the case [here].” 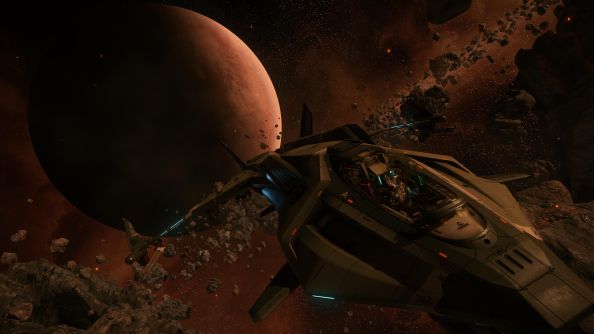 He continued, “We have a lot of people who work really hard on this, they’re very passionate about making everything possible for people that have backed it. Maybe it’s taking a bit longer than people want it to, but I think it’s going to be really good and it’s also expanded in terms of scope. I’m pretty confident that [none of the backers want] some small limited scope game. And the only person who probably would want that is someone who doesn’t want to have a game that’s significantly better than the one they’re making.

“I think that’s the problem with today and the internet: people that are willing to be keyboard warriors and be loud have a platform they wouldn’t have had in the past. Then of course everyone likes sensationalists and people slinging mud around. I think the game’s going to speak for itself. I definitely know that what people care about is a good game more than anything else. At the end of the day, if it’s a bit late and it’s great, that’s what counts. If it’s crap and you push it out the door, it’s crap forever.”

We’ll have more on Star Citizen after the reveal event on Friday. We’ve seen what they’ve got coming up and you won’t want to miss it.