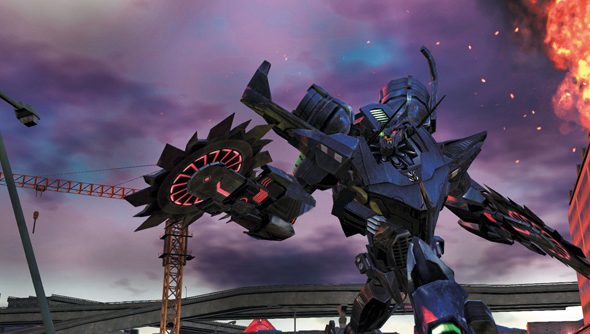 In the Transformers universe – and in Transformers Universe, Jagex’s upcoming motor MOBA – a Meltdown is apparently a good thing. A “noble” Autobot who fires health up the exhausts of his allies and rockets into the grills of his enemies, and doubles as the sort of yellow truck every little boy squeals in the presence of.

In competitive multiplayer gaming, though, all yins must have exquisitely balanced yangs. He’ll be counteracted by Duststorm – signed-up member of the tellingly-named Decepticons and part-time buggy.

Play both of their introductory videos at once for a climactic soundclash.

Each bot will have its own weaponry, augment options, specialities and playstyles, say Jagex – and somewhere in the space between, “countless” strategies will emerge.

Transformers Universe began development as an action-centric MMO – but as time’s worn on, its universe has come to encompass a battle arena – nothing more, nothing less.

Jagex have promised “fast-paced, battle centric, tactical action” – and it certainly looks fast, doesn’t it? Beta sign-up is still happening on the official site, if you’re interested, with a launch pencilled in for this summer.