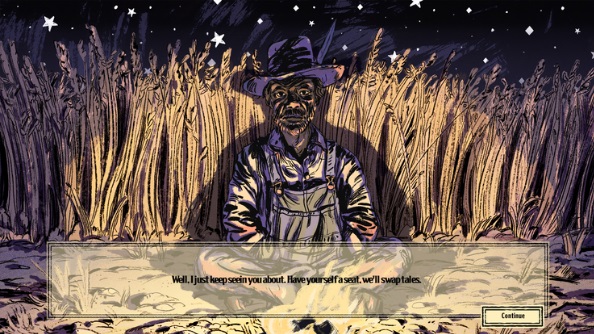 Johnnemann Nordhagen, a developer on the team behind Gone Home and BioShock 2, has set up Dim Bulb Games and is well on the way through the creation of Where the Water Tastes Like Wine, an interactive fiction game set in the American South. The first trailer was shown at The Game Awards, set to the tune of some wonderfully twangy country.

Like your games small and personal? Check out some of the other best indie games on PC.

Where the Water Tastes Like Wine is “a bleak American folk tale about traveling, sharing stories, and surviving manifest destiny,” according to Nordhagen. It takes place on a 3D overworld with 2D illustrations by Kellan Jett, with “an emerging fantastical, psychedelic, surreal, and creepy tinge as the game continues.”

You’ll be required to make a series of choices to progress the narrative, in a similar manner to 80 Days.

Where the Water Tastes Like Wine releases next year on Windows, Mac, and Linux.