80 Days is a choose your own adventure style game that was once shackled to iOS but will soon find its way onto PC. It’s unassuming, with simple art and an uncomplicated interface, and while it was certainly very at home on mobile, nothing seems to have been lost in its trip over to the new platform.

Loosely based on Jules Verne’s classic novel, 80 Days pits Phileas Fogg and his valet, Passepartout, against the clock as they attempt to circumnavigate the globe. It’s a romantic glimpse at a time envisioned by the World’s Fair, where technological progress and innovation captured people’s imagination. It’s part steampunk, part history; an adventure that seems both appropriate for the period and extremely fanciful. 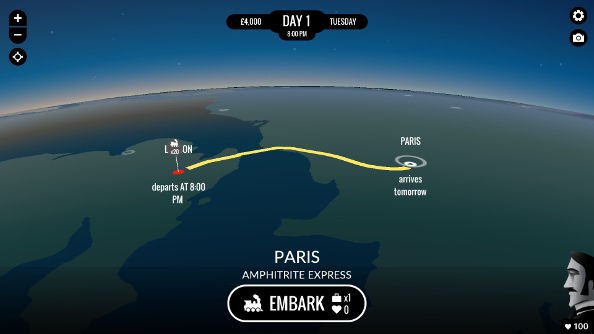 It is through Passepartout’s voice and eyes that we explore the world that never was, from familiar Victorian London to the more exotic cities of Bombay and Manila, all lavished with sci-fi overtones that were never present in the book, but are far from unwelcome.

My adventure began with a train ride from England to France – not novel now, but certainly not something Victorians could do. Especially considering the train itself was submersible, and the first in a long line of whimsical vehicles that would transport the pair of travellers across the planet. In France, the journey started in earnest, and the whole world opened up, rich in routes and modes of transport both mundane and bizarre.

It’s from Paris that it pays to start planning the long-term journey. Do I go south, I wondered, to sunny Nice, and from there to Italy, perhaps, or maybe Northern Africa? Or do I head east, through Germany and increasingly cold Russia, eventually reaching Japan and America? There are an extraordinary number of possible routes, each with their own risks and rewards. Some are uncomfortable but fast, others dangerous or extremely expensive. Luggage space must even be considered, as some vehicles has limited space. 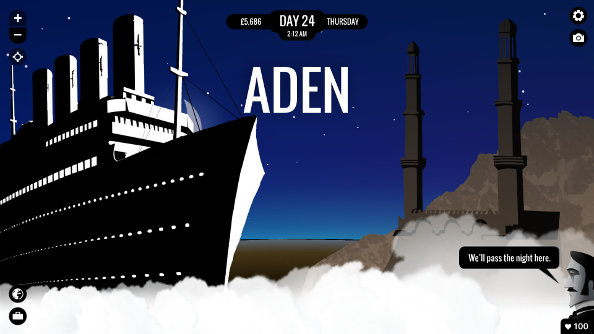 Nice was the destination I chose, as it allowed me to bring both suitcases, containing clothes for Fogg, some items that could be sold for a massive markup in other cities, and objects that could be used to make new friends on the road. It turns out I’m quite a good valet.

In Nice, I experienced the tensions between the Italians, the city’s old owners, and its new masters, the French. 80 Days developer Inkle seems to enjoy straddling the line between history and fiction, giving each city a strong sense of place while littering them with lots of surprises.

The game is split up into two phases: cities and travel. The cities act like hubs, where Passepartout can explore, book a hotel, visit the market or take a trip to the bank with his boss and withdraw some more cash. Exploration of these cities takes the form of choose your own adventures where you can dictate Passepartout’s actions and even what he sees. So he might watch some protestors and even engage with them, or he might wander over to a group of people playing a game and join them, possibly winning a bit of money. 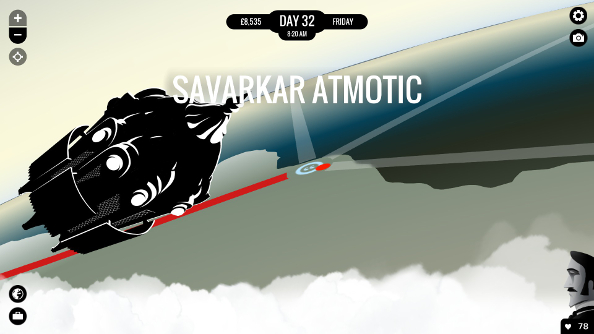 As a gentleman’s valet, the servant has a foot in both worlds. He’s able to talk confidently to the gentry, and also spend time with those lower down the social strata. He can see both sides of a place, making friends with rough fishermen and other wealthy European travellers.

Such sequences, like the entire game, are blessed with writing that is both elegant and accessible, not unlike Verne’s prose. Despite the minimalistic art, 80 Days is a game that makes you feel like you’re with Fogg and Passepartout, with each trip and every location being described in rich detail. They serve a mechanical purpose, as well, since the conversations the valet has often open up new routes across the globe and snippets of information about new cities.

In Nice, I heard rumours about how the fancy masquerade masks found in Venice are highly prized in a distant city, and at the same time discovered a route that went directly between Nice and Venice, so after a good night’s sleep (and a grooming session that increased Fogg’s health, which can fall down for a multitude of reasons, from a bumpy car ride to a nasty crash), we hit the road once more. 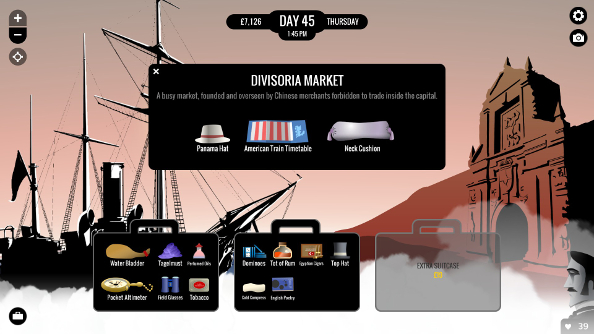 As we made our way across Europe, all the way to the edge of the continent, Fogg and Passepartout started to develop their relationship. Fogg’s an interesting master: an eccentric, but not chatty, and certainly not full of the adventurous spirit that you’d expect from someone circumnavigating the globe. But, as Passepartout describes him, he’s steady and reliable. Small vignettes played out as the two men learned more about each other.

This relationship became more interesting during a time of trouble, a great crisis in the skies above Indonesia. What began as a conversation between Passepartout and an airship’s first mate ended in a mutiny and something much worse, leaving Fogg and his man wondering if they’d even be alive the next day, let alone able to continue their mission. For the first time, Fogg seemed more like a person instead of this imposing, stoic ideal of what a Victorian Englishman should be. A touching scene brought the two together, and went on to inform a lot of the choices I made later in the game.

80 Days has quite a few surprising, intimate moments like this, but you’ll surely miss most of them on your first playthrough. They are tied to specific routes and choices you’ll make. It’s a game that begs to be played several times, with each of them offering unique opportunities and entirely new, self-contained adventures. Even taking the exact same route again can yield different results based on how you guide Passepartout through his encounters. 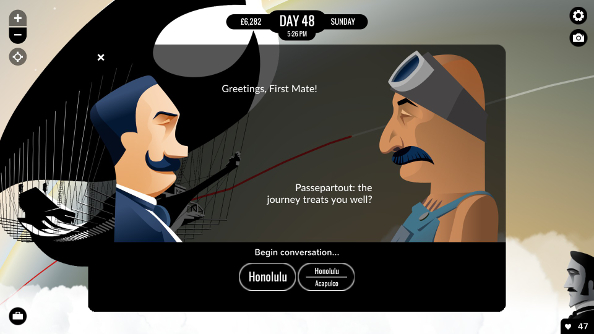 By the halfway mark, the trip had taken its toll on Fogg and caring for him became a priority, but one that was not conducive to fast travel. It was then that the race against the clock reached a new intensity, as I had to balance his health with the need to continue travelling. Time I could have spent exploring new cities and taking in the sights was, often, used up making Fogg comfortable and following the orders of doctors, but at the same time, Fogg himself was adamant that the journey must continue.

Arriving in America was a great relief. The journey time between cities became shorter and Fogg’s health returned. I had not expected a mobile game, even a PC port of one, to evoke such worries or draw me into the lives of the pair of travellers as much as 80 Days clearly has. I’ve been inspired to reassess my slightly dismissive attitudes toward mobile games, because as much as I can enjoy them, I never expect to be gripped by them.

With only the America and then the Atlantic between us and winning the wager, but with time dwindling, I had to be quite smart about what routes we took. Trains, cars and whatever mode of transport is available all depart at set times and for specific costs, but Fogg is rather good at negotiating. The right clothes can impress drivers and the like – as well as shielding him from the elements – so departure times can be brought forward, for an extortionate cost, of course. 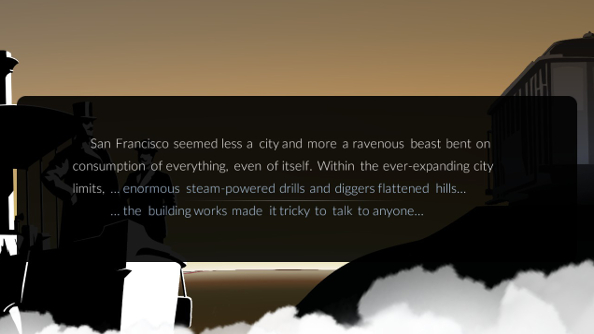 Thankfully I’d been quite frugal up to this point, and had also raised quite a lot of money by buying items from one market and selling them for a huge profit further along our path. Getting across America still proved to be quite expensive, however, but it took half the time it would have had I not splashed out.

With New York ahead of us, and then only one very expensive airship ride to London, my thoughts turned to the passengers I’d met as we rolled through the great American expanse between the east and west coasts. Those train rides were full of stories told by the others in our carriages, stories of the difficulties faced by Native Americans who were being ushered into reservations and of the bubbling tension between African Americans and caucasians in this post-Civil War country.

I thought about tourism, and what a strange thing it is, still a hobby of the privileged and often an ineffective means of really getting to know a country. Wealth and privilege come up a lot in 80 Days, and one throwaway conversation stuck with me a little bit. Passepartout was talking to a dock worker in Manila, who called him a wealthy man who couldn’t understand his life, despite Passepartout’s position as a servant. But before protesting, the valet compared their attire, he a well-dressed, clean, educated Parisian man, the other covered in oil and grease, wearing patchy, ill-fitting clothes, and he thought the better off it. Neither were gentry, but they were still worlds apart. 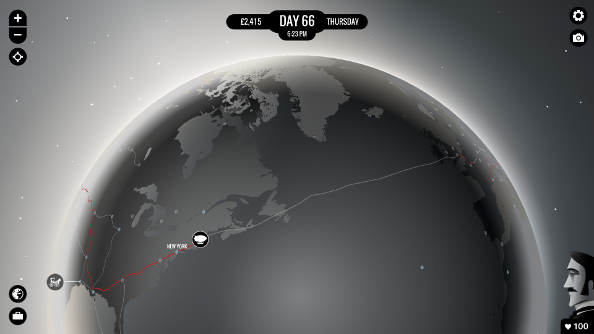 Against the odds, and after quite a bit of dilly dallying around the Middle East many weeks before, London was ahead of us. I made the trip in 67 days, and Fogg won his £20,000 wager, which is over a million pounds today. I’d suggest spending it all on mojitos on a quiet tropical island and absolutely no more deadly adventures. Maybe a raise for poor Passepartout, as well?

A witty, beautifully written game, 80 Days is absolutely something you should consider taking for a spin when it launches on September 29th. It seems as home on PC as it is on iOS, and if you’re looking for a game that isn’t demanding for playing on a laptop, then this is certainly one to remember.

You can take a look at what other great games are good for playing on a laptop by reading Matt’s Best games for laptops feature.