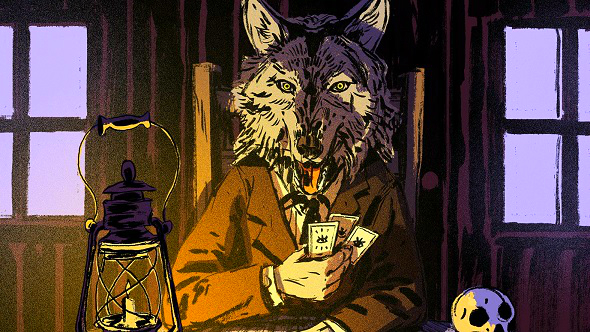 Absence has come to define the most celebrated narrative games in recent years. Gone Home, Everybody’s Gone to the Rapture, Firewatch, and What Remains of Edith Finch are united by their fascination with abandonment – living spaces and countrysides robbed of human life. Where have all those people gone? Well, it would seem that at least some of them have migrated to Where the Water Tastes Like Wine.

Are narrative games in danger of becoming oversaturated? Some people think so.

Unlike its peers, Dim Bulb Games’ Where the Water Tastes Like Wine is packed with characters to speak to. In fact, it gives you all 50 states of North America to traipse across, a century of history on the lips of its population. “You see, this land is built on stories. It’s one big story, this country, woven of many small ones,” the devil tells you after you lose a game of poker to him. To pay your debt, the devil tells you to travel the country and collect folk stories, and to let them spread. Then he strips you of your flesh so that death doesn’t take you early, and lets you go, a skeleton with a bindle over your shoulder, whistling while you stride.

There are 219 of these small stories to find in total. They are ordinary when you first encounter them but evolve into tales of myth and legend as you share them around. A couple of bootleggers held at gunpoint becomes a full-blown shootout worthy of Bonnie and Clyde as it is re-told; a small battle on the streets of Boston you are caught up in is embellished to the point that it becomes an all-out urban war. 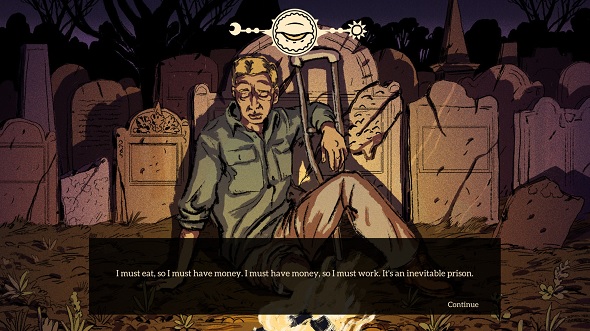 You are able to use these improved stories to better barter with the 16 othertravellers you encounter. You sit with them at campfires, where they ask to trade stories, but are only interested in specific ones: hopeful, tragic, funny, scary, or thrilling. Unfortunately, it is not always clear which story fits into each category, and so some guesswork is needed (Monkey Island fans will be reminded of insult swordfighting). But the game does not punish failure drastically, you will just have to try again later – likewise, running out of health isn’t much of an issue as the devil’s curse reanimates you.

Satisfy the travellers with your stories and you unlock their next chapter, in the process acquiring a ‘true’ story from them – which is what the game places the most value in. Truth is understood to come from hardship, from the cries of those who struggle the most, who face prejudice, pain, and death. Each region has its own archetype that plays up to this: in North Carolina it is the thirsty cotton pickers, in New York it is unemployed immigrants, in New Mexico it is the aging curandera. There are also miners, Great War veterans, ragtime entertainers, travelling salesmen, and busboys. 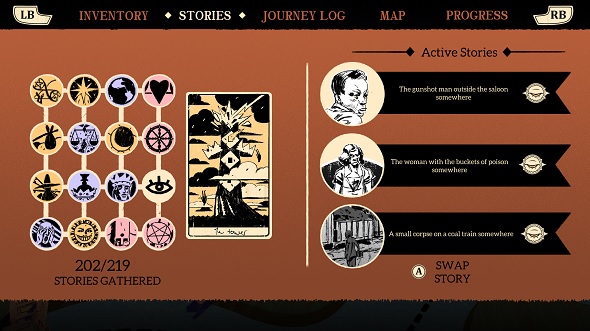 Beyond that, women, orphans, hobos, and people of colour are given the spotlight among the 16 travellers you seek out – based on people who are either pivotal to or ignored by American history. Wisely, individual writers for each character who match their gender, race, or experience have been brought in. Even more heartening is that the number of authors doesn’t result in inconsistency – the writing throughout is insightful, characterful, and true to the region, honouring local dialects and slang. The music also matches each region – Louisiana gets a blues harmonica, for example, while Texas is soundtracked by a flatpick guitar. The touches of magical realism add further flavour to your travels: talking crows, undead horsemen, and winged goats seen sipping from a stream.

Despite the consistency on show there are still occasional jarring moments. In one instance, I travelled from the Dust Bowl (representing the Great Depression of the 1930s) and into California where a 1960s flower child greeted me – a change in era and theme without transition. There is also a chug in performance as the game loads new regions of the map. This was especially noticeable during a couple of tedious moments when I exhausted a state of its stories and had to walk a great distance to find more – there being no nearby trains to hop on or roads on which to hitchhike. 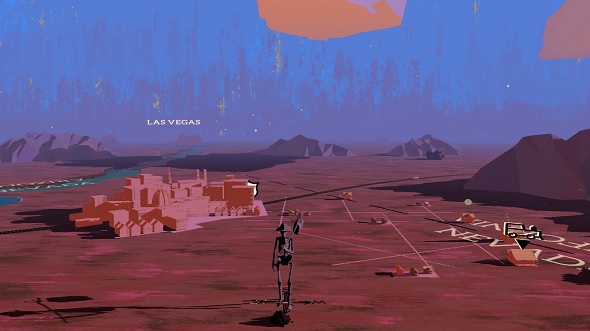 What this does highlight, though, is that the game’s stories kept me hungry for new tales. They are all united by themes of travel, roots music, and the impossibility of the American Dream. Which is pertinent given that the game offers a thorough examination of the events that shaped ‘The Land of the Free’. Throughout, you are encouraged to put a question mark at the end of that term. You might even be driven to scoff at it when applied to modern-day America.

Where the Water Tastes Like Wine is a different kind of narrative game, then. Rather than telling a singular story, it is an anthology. Above all, it is interested in downtrodden people and their tragedies and triumphs. It has you sit with them and talk to them, rather than form an impression by exploring the rooms and objects that someone has left behind.