Blizzard’s mighty CCG is out now; read our Hearthstone review to see what we thought of it.

On my first night playing Hearthstone, I watched a mage cast a fireball into her own face. We couldn’t communicate directly, but the message was clear: she knew I’d won, and would rather cook her own eyeballs than allow me the satisfaction and achievement progress of dealing the damage myself.

It was a move at once shrewd and silly, petty and dignified: a spectrum of personality I don’t think either of us could have mustered with the full use of our keyboards. So I want to make sure that’s something Blizzard never gives us. 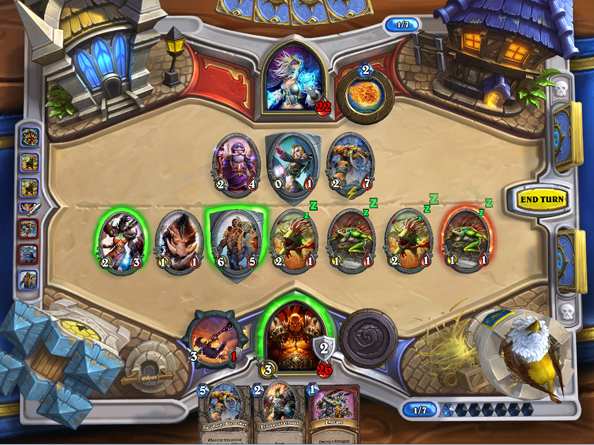 For those who don’t know, Hearthstone applies lessons learned from quietly cooperative PlayStation adventure Journey to competitive PC multiplayer. It strips out the capacity for players to communicate with random opponents via text or voice, without the use of third-party programs or cups and string.

Where other online games leave you at the mercy of the racist, sexist, unfeeling underbelly of the internet, Heathstone offers just six voice-acted emotes, which vary slightly according to the class you’re playing.

Blizzard’s reasoning is sensible: they want everybody to be able to play Hearthstone free from harassment, and they want keep the game flowing at a smooth pace.

In practice, it’s very clever stuff: the emotes leave you to make the politest possible interpretation of your opponent’s intentions. While your real-life enemy might be flinging poo at their screen, their in-game avatar remains composed and impassive – a still image, after all. 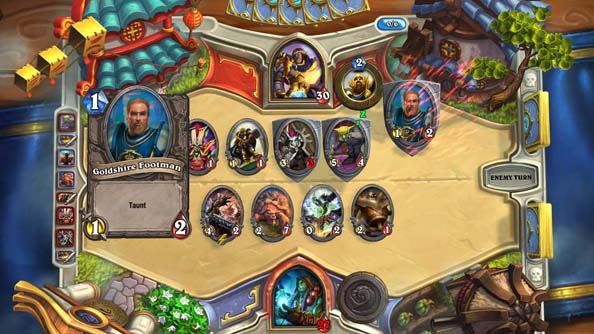 Most players seem to take the hint, and are courteous. They mostly exchange stilted compliments (“Well played,” a hulking orc will growl. “Thank you,” my priest will reply, “Well played.” And so the cycle goes on).

It doesn’t change the nature of dedicated, head-in-the-hearth flamers. But the most aggressive players I’ve met are reduced to spamming ‘Threaten’ emotes – their explosive expletives translated into the kind of barks you’d hear from a Scooby Doo villain. The muted environment dulls their blades.

There are ways around it – we’re running an inter-PCGamesN tournament at the moment, and there’s fun to be had on Hearthstone with friends who run Skype in the background. But Blizzard’s emotes are flexible enough that I’ve never felt the need to express anything in-match I wasn’t able to.

Because the barks are so short and simple, they’re open to interpretation. A “Hello” can be a greeting, for instance, or a repeated expression of frustration against a dithering opponent. 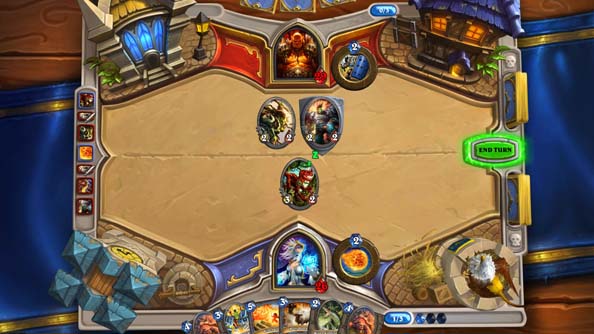 Within that ambiguity, too, lies the potential for great tension. A “Thank you” can represent genuine gratitude – a gg, wp – or a sly hint that you’ve walked your minions into a trap several turns in the making. You can never be quite sure until you hand back control to your faceless opponent.

Sarcasm, as you might imagine, is a whole other can of worms. Thankfully, Blizzard allow a ‘squish’ button for selectively silencing the worst of enemy emotes.

I don’t think they need to allow much more – though there are plenty who would disagree with me on all this. Many are players of Blizzard’s big three – WoW, StarCraft and Diablo. At least two of those games require players to be utterly reliant on text or VOIP communication if they’re to be at all tactically effective. And I’d do nothing to change them.

But Hearthstone is a simple game, and should be allowed to stay that way. There are no teammates; no rules for opponents to quibble over before they begin. The game is just your cards, and those of a well-matched stranger. It is two old men playing chess in the park. Why cheapen that with internet chirpings? 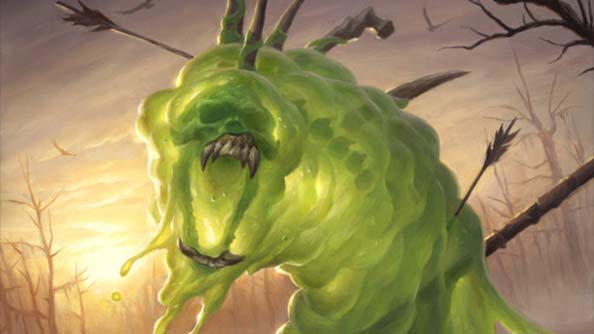 The other day found me coming to terms with an imminent defeat at the hands of a warlock. It had been a fairly even match, but a few bets hadn’t paid off – and then something really weird happened.

The warlock began to fire off healing spells and attack boosts – but it wasn’t his own creatures he was buffing. The numbers on both sides of my sole remaining minion were dialling upwards. It was the centrepiece of my favourite Priest deck, as the warlock knew – and now it was suddenly more than powerful enough to worry him.

Then the warlock’s minions came thundering down, and my hero’s picture splintered into a thousand pieces. My ‘roided-up monster sat impotently on the board as the curtain came down.I can make you, the warlock had said, wordlessly. And now I’ll break you.

It wasn’t something I imagine he’d have thought to say in chat – and if he had, I wouldn’t have much appreciated it. But to see it said so theatrically in cards was quite another matter: it was poetry