Judging from the spring playoffs so far, Riot’s LCS system might just have come into maturity after three years. With a number of tense best-of-five playoff series between evenly matched teams, the LCS system finally seems to have intrinsic importance beyond serving as an extended try-out for Worlds.

In an LCS season that was already full of great rivalries and surprising drama, however, this past weekend stood out as one of the best weekends of competition European and North American League of Legends have ever had.

The LCS system’s problem was that it didn’t always seem that meaningful, especially once Korea and China began to dominate the global competitive scene. Having eight teams per division, of which six would end up making the playoffs, always sapped the regular season of some of its meaning and drama. It also had the defect (and this was less to do with the LCS system and more to do with the eSports ecosystem in NA and EU) of creating divisions where only one or two teams were potentially relevant on a global scale, while the rest were competing for the honor of losing to those teams in the semifinals.

This playoff season, however, has been very different for the LCS. The expanded ten-team LCS divisions created a meaningful contest for the playoffs and also developed a healthier middle-tier of teams, while the instant-relegation of last-place teams created tension near the bottom of the standings. Except in NA, where Team Coast’s 1-17 finishing record made them the Cloud9 of crap teams.

But what’s been really striking about this playoff season is how it finally made LCS feel like a real sports league.

LCS has always had the trappings of a traditional sports broadcast. Riot packages eSports better than anyone in the business. But this year, the playoffs felt like the existed as something distinct and important from the regular season. Once the playoff and relegation races were over, these playoffs became a real test of the best teams’ metal, rather than mere confirmation of the regular season standings. This weekend, “Playoff League of Legends” became something I could talk about in the way I talk about “playoff hockey” or “playoff baseball.” 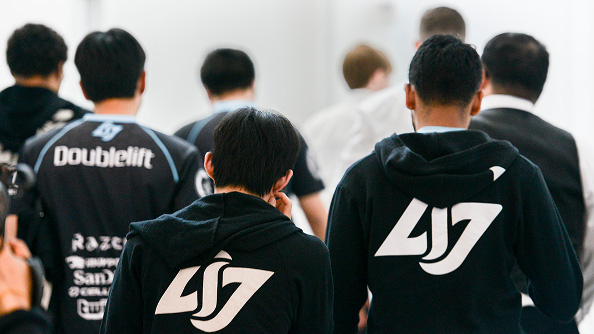 Last weekend, Counter-Logic Gaming imploded against the heavy-underdog, Team Liquid, getting swept out of playoffs 3-0. It was a great sports story even without being a great series: it became further evidence that CLG has a character beyond the individual players who comprise its roster. CLG is a team that chokes, and who might always be their own worst enemies.

This weekend, it was Team Liquid’s turn to stumble as they watched a 2-0 lead over Cloud9 evaporate. Cloud9, with all their struggles this season and a roster that’s under scrutiny as never before, had to rally and prove that they’re still an elite team in North America. In three consecutive games, they did just that, while some of the weaknesses that dogged Liquid all season came back to haunt them one more time in the playoffs. Meanwhile, Fnatic defended their long-held position at the top of European League by defeating impressive LCS newcomers H2k.

But all that paled next to what seemed like the foregone conclusion match of the weekend: Unicorns of Love versus SK Gaming.

SK dominated the regular season in Europe. Led by Dennis “Svenskeren” Johnsen and Konstantinos “Forg1ven” Tzortziou, SK’s icy heel, they seemed like the Cobra Kai squad of EU LCS. They were good, they were ruthless, and they were proud of both. On the other side were Unicorns of Love, the unlikely team of buddies that somehow laddered their way into the Challenger Series, and won a spot in the LCS.

Unicorns of Love were a wild-card team all season. They were good, but with a 9-9 record, they were not at the level of squads like Fnatic or SK. And yet they also beat Fnatic 2-0 in their meetings during the regular season.

But the regular season isn’t the playoffs, and it seemed impossible that Unicorns of Love could manage three victories against the machine-like precision and discipline of SK Gaming.

So of course that’s exactly what happened. 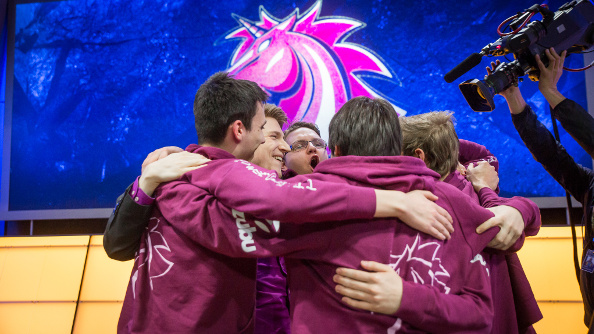 The degree to which SK were in a fight for their lives became clear in Game 3, when Unicorns of Love demolished SK in 30 minutes without suffering a single kill.

UoL had moments where they stumbled. They opened strong in a couple of games, only to watch them slip away as Svenskeren tuned into the terminator or as the UoL team got over-excited at the scent of blood and started trying to force plays. When the semifinal went to Game 5, it seemed like SK had finally gotten a grip on the series and that UoL had fatally squandered their last great advantage.

Game 5 turned into the signature match of the entire playoffs as Unicorns of Love battled their way back into the game after 30 minutes, stole a Baron, and held off the leading SK squad into a chaotic late-game where both teams were just a bad decision away from elimination.

The game had everything. A comeback. A base-race. Baron fights. Long, tense sieges. Finally, Unicorns of Love got the fight they’d been waiting for as they aced SK near Dragon and took a very late, very hard-won victory.

SK had been the team to beat in Europe since January. They might still be. But in a best-of-five series, Unicorns of Love showed that SK are not the powerhouse they appeared to be. And Unicorns of Love, the team that seemed like the least serious squad in pro League of Legends, might have more depth and fortitude than anyone in the LCS right now.

It was a great moment and a great story. It’s why people watch sports.

The LCS Spring Finals take place this weekend. Fnatic play Unicorns of Love for the spring title on Sunday, April 19 at 4 PM UK / 11 AM Eastern, while Cloud 9 renew their rivalry with Team SoloMid at 8 PM UK / 3 PM Eastern. Both matches will be broadcast on LoLEsports.com