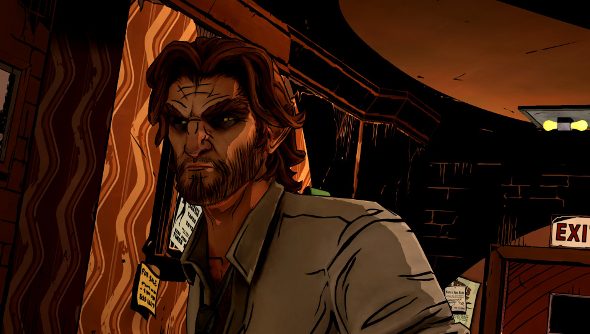 Telltale’s got another comic book adaptation for us to get lost in, this time in the form of The Wolf Among Us. Taking place in the world of Bill Willingham’s Fables comic book series – it’s a prequel, so don’t worry about being uninitiated – it mixes in the formula of moral quandaries and tough decisions established in The Walking Dead adventure game series, but charts its own course by spinning a tonally different yarn with characters you might already be familiar with.

Life’s tough for the fairy tale denizens of New York. Stripped of their possessions and homes, this magical diaspora live secret lives beneath the noses of regular folk, known as mundies, and keeping them in line is Bigby Wolf, Sheriff of Fabletown, better known as the monstrous killer of pigs and hunter of little girls in red cloaks, The Big Bad Wolf.

And he’s got a new case: a murdered prostitute, a plethora of suspects and a slew of grudges centuries old – he’s got his work cut out for him. 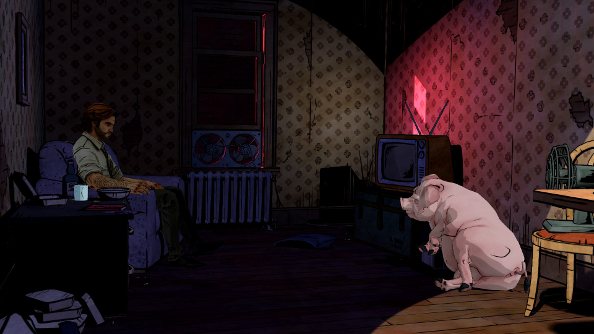 Stepping into Fabletown is like entering a comic book. Characters are defined by strong lines and detailed with pencil shading; thick, inky shadows cling to every surface; and inconsequential objects and window dressing look quickly sketched. But The Wolf Among Us is not simply aping a comic aesthetic, as it combines a strong pulpy noir look with grungy ‘80s grime and neon vibrancy to create colourful yet moody scenes.

It’s a perfect style for the adventure, where everyone is miserable and out of place. Bigby Wolf patrols these streets, attempting to uphold the glamour-assisted masquerade that allows the fairy tale inhabitants of New York to blend in, while also trying to solve disputes and maintain order.

Where The Walking Dead gave us a blank slate in Lee to play with, Faith, the first episode of The Wolf Among Us, has us walking in the shoes of an established character. Bigby’s past and personality are already somewhat defined, and even if you know nothing about the comics, you’ll surely be aware of the monster from the Aesop and Grimm fairy tales, among others. 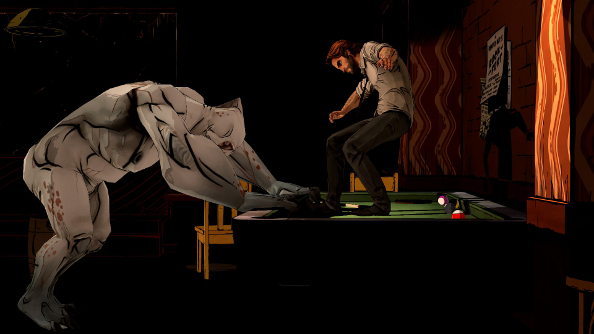 He’s reformed now, however. No longer preying on wee girls or porcine brothers – in fact, he’s friends with Colin, one of the Three Little Pigs, now a smoking, drinking couch surfer – he’s a reluctant protector and hardboiled investigator, channelling the likes of Sam Spade and Philip Marlowe. But as Faith reveals, Bigby’s past is not easy to escape. Throughout his murder investigation, which takes him from the lavishly drawn magical office of unrepentant arsehole Ichabod Crane to rundown slums where the grubby Mr. Toad and his adorable frogspawn reside, he fights with his fellow Fables and the hungry animal that lives within him.

Few Fables trust their Sheriff, either because they remember the beast he once was, or because they resent his authority and the fact that he represents the Fabletown bureaucracy. This makes most exchanges between Bigby and his folk heated, and sometimes these exchanges end in an all out fight. Fables are a lot hardier than mundies, which has allowed Telltale to go all out with these brawls. Savage, bloody and ultra-violent they are the most visually arresting scenes in this first episode, elevated by top-notch choreography and fluid animation.

Lamentably, these fights aren’t particularly interactive, being only a step above your standard QTE. But there’s still some nuance to them, with the occasional choice that needs to be made in the heat of the moment. In one instance, I found myself tangoing with Grendel of Beowulf fame in what was the most stirring action sequence of the episode. When my victory was secured, I could lay off and show some mercy, but much like Bigby’s inner wolf, I was all fired up, and ended up mutilating my sparring partner. I felt empowered, and then almost immediately an overwhelming sense of guilt assaulted me as the onlookers became horrified.

The limited interactivity of the action sequences is fairly representative of the whole episode. Telltale has moved even further away from its point-and-click roots, offering up no puzzles and only a few points of interest in every scene to click on. As a die-hard classic adventure game fan, I should probably be dismayed, but I’m not. The occasional brain teaser – calling them that is likely a tad too favourable – in The Walking Dead felt out of place, like the developer wasn’t quite confident enough to leave the trappings of tradition behind. This time around, all attention is given to solving people, and people are not very easily solved. A white lie told to a friend can come back to haunt you, even if it seemed like the right thing to do, and a threat made in anger to elicit a confession might only make a situation worse. It’s even harder to choose the right – or what you think is right – course of action when you only have a few seconds to make a choice.

The results of such choices or not immediately apparent either. Chasing one criminal allows another to escape, his fate unknown, at least until the next episode. And the way you treat Bigby’s fellow Fables informs how they will react to their Sheriff later in the episode and beyond. Treat Mr. Toad gruffly at the start of the episode, for instance, and he might be less inclined to help Bigby with his investigation down the line.

While first episodes, whether it’s a TV pilot, the first issue of a comic or the starting point of an episodic game, run the risk of drowning in exposition, Faith sidesteps this issue with snappy, organic dialogue that reveals far more, and subtly, than dreary explanations and back story. It holds back a bit, too, of course, as this is a noir mystery. It entices with things left unsaid or discussions abruptly ended, and by its end it left me with more questions than answers and ravenously hungry for more.

Faith is a sterling beginning to what looks to be another feather in Telltale’s cap; a confident, slick opener to a mystery that begs to be explored. I wait with bated breath and sweaty palms for the next installment, where I’m sure to discover how my choices have only made things worse, at least if The Walking Dead is anything to go by.