What if I told you the game with the best writing of 2017 was about a man with a crewcut slamming a hatchet into the faces of Nazi soldiers? A guy who runs around like he is on skates, hoovering up helmets, armour, med packs, and ammo like a meaty Dyson. A fella who can take on an entire U-boat filled with enemies while wheeling himself around on a wheelchair and pissing through a tube.

In Wolfenstein II, you play as B.J. Blazkowicz, an urban legend made flesh – Nazis probably warn their children about him when they tuck them into bed. Hush, little kiddies – if you aren’t good, Terror Billy will come to get you.

Read about how Wolfenstein II’s cutscenes were created.

It is incredible that, despite this gung-ho premise, Wolfenstein II delivers the most human story I have ever experienced in a videogame. It delivers a fistful of unforgettable sequences – some made me laugh at their absurdity, others made me think, and some even brought a tear to my eye. It is a game that defies expectation at every single turn. 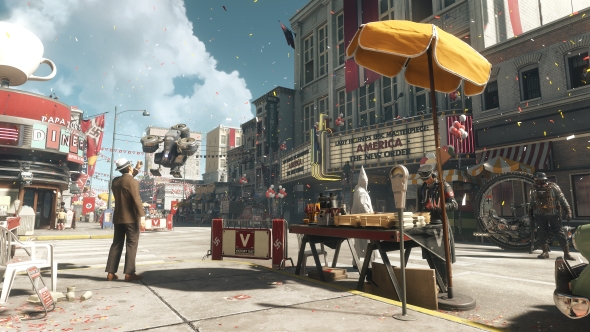 The game’s cast are memorable, too. Whether it is the Nazi turncoat looking for redemption – and cake – or the Black Panther-esque resistance leader who fights on despite her own trauma, each character feels real. B.J. himself delivers monologues with the heart of a poet, while antagonist Frau Engel is more terrifying than Hannibal Lecter in clown makeup.

On top of the excellent writing, Wolfenstein II has some of the beefiest guns in gaming. Squeeze the trigger and your dual submachine guns will jitter about angrily, like a freshly-caught fish trying to leap back into a lake. But enemy bullets are deadly, too – more dangerous than in many other modern shooters – and you will die quickly as a result. This is gunplay that’s about killing everything in the room before it can react, a game built from a series of violent set-pieces interspersed with heartfelt, personal stories. One minute you are Terror Billy, the next you are crying into your keyboard like a square-jawed baby.