From the very first day of pre-production, MachineGames had a team in place to make sure Wolfenstein II’s shooting was angry, physical, and cathartic. There is an intrinsic appeal to shooting Nazis, but the developers wanted to ensure you could snuff these historical enemies out in a glorious fountain of claret, popped helmets, and detached limbs, using some of the most satisfying weapons in videogames – probably one in each hand. That is why MachineGames’ through-the-gun team was entrenched in the project from the start, dug in with that singular vision trained in the centre of their sights.

“The through-the-gun team is led by a guy who is competing in practical shooting,” senior game designer Andreas Ojerfors tells me. “He has a lot of deep insight into different kinds of firearms, how it feels to fire them, and how you need to handle them. He infuses a lot of that experience into how our weapons handle, but also how they feel to just fire. One principle the through-the-gun team has is that they want the gunplay to be very heavy, very physical and anchored in the physical world, but never in a way that is detrimental to fluidity and the gameplay itself.”

In the PlayStation-exclusive Killzone series, Guerrilla Games accomplished this by giving the firearms a little heft – adding an animation delay when you move the gun to aim. You have to fight against each weapons’ weight as they wobble and shift with every movement. The guns in Killzone feel hulking because of that input delay, but MachineGames have a different approach to mimicking the metallic mass of a large sci-fi boomstick. 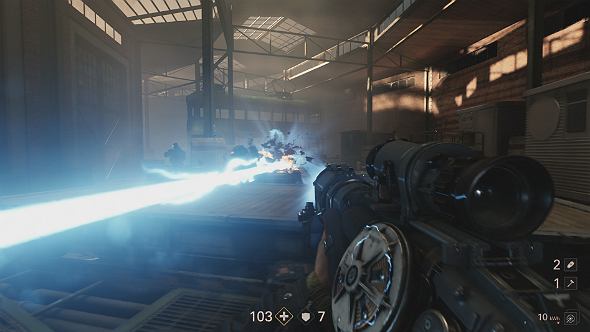 One of MachineGames’ rules was that the weapons should never hinder you or feel cumbersome. Instead, that weight is implied through a vast library of weapon animations – think about the way B.J. hulks a heavy weapon up from the floor – as well as how the enemies and world react to your fire. “It shouldn’t affect how you move or how quickly you can reload, and it shouldn’t make the gameplay suffer,” Ojerfors explains.

On top of that ethos, for the first time in Wolfenstein II the protagonist has an actual body – he is not just a floating, Nazi-murdering pair of sentient guns loaded with snappy one-liners. “They worked a lot on that – to make it feel good to just be in B.J.’s skin, moving in the world, jumping, and shooting,” Ojerfors says. It all feeds into the physicality of Wolfenstein II, backed up by that aforementioned bank of animations, a luxury that is only affordable in the triple-A shooter space Wolfenstein II inhabits. This excess is most apparent in the Tension System, a method of secretly tracking how much pressure B.J. is under and tweaking the speed of his animations to suit.

“If he’s in combat, very hectic combat, or if he is in a situation that is dead calm – that’s a value that our different game systems have access to,” Ojerfors explains. “If he is just walking about and there are no enemies nearby and you choose to do a reload, he does a pretty calm reload. But if you are in the middle of combat, people are shooting at you and you are down behind cover, B.J.’s going to do it really fast. The same thing goes for every type of weapon animation we have – they are sped up when you are in an intense situation. It’s a fluid value that we look at, so we understand how tense a situation is. It’s very dynamic. 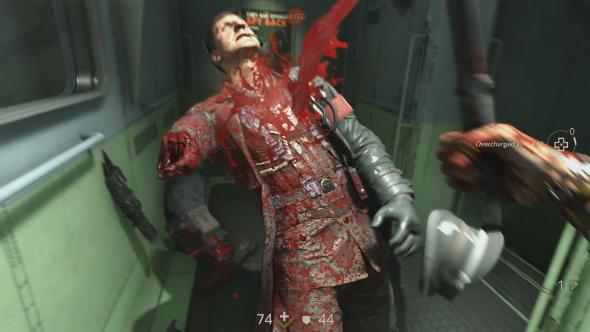 “We have an enormous amount of animations for the weapons, so they are very detailed in a lot of different use-cases. We want to make it fun just to use the weapons – there should be variation there. We also have dual-wield – that pretty much doubles the amount of animations we have, especially now you can have different combinations of weapons [in each hand]. We thought that was worth it. It’s a big investment for us, but we think it’s so cool to be able to create those different combinations to suit your playstyle. We can’t just mirror the animations this time around, we have to make unique animations for the two hands.”

This level of detail extends to the enemies, too. Nazis react to every shot, with the game systems choosing the best feedback animation for the job depending on the context: what guns you are using, where the enemy is stood, whereabouts on their body you hit them, and more. “It’s supposed to always feel natural, not canned,” Ojerfors explains. “It’s supposed to feel like exactly what would happen if I shot a guy with this weapon and he was leaning over there or he was standing next to that. If you shoot off a leg or you gore someone, the resulting pieces will interact with the world through physics.”

Yours and your enemy’s relentless hail of bullets also leave their mark on the world, capturing the thrill of that infamous lobby shootout in The Matrix, with strewn debris and cracked wood splintering through the air as bullets spill through the room. But rather than opting for full environmental destruction like in games such as Battlefield and Red Faction, Wolfenstein takes a clever, more measured approach to tearing apart its arenas. 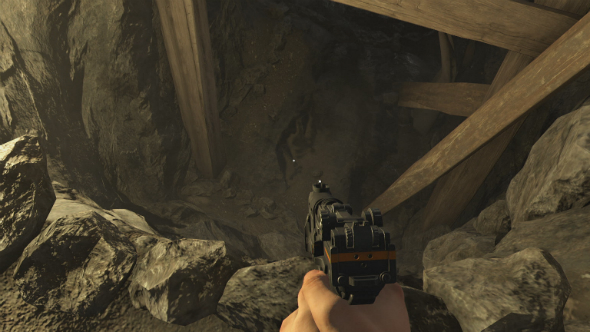 “What we try to do is create what we call destructible environments, but we try to create them where we think it’s likely that quite a lot of players are going to shoot,” Ojerfors says. “For example, around doorways we have destructible pieces. So if an enemy takes cover behind a doorway and peeks out, you shoot and hit the door, you’ll have pieces of the door break off. Pillars where people can take cover – we’re going to have destructibles around that.

“It’s supposed to create the illusion when you’re playing that the world is destructible. If this is a natural place for the enemy to take cover, we’re going to try have that surrounding area full of destructibles. It’s the same for where the player is likely to take cover. You cause a lot of mayhem, but so does the enemy when firing at you – they might even take out your cover after a while, so you can’t just camp.”

To ensure each battle makes full use of this carnage, the AI is programmed to naturally gravitate towards these destructible zones. The Nazis know exactly where is good to stand, lean, and crouch in any given environment, with a bunch of different optimal cover points pinging them depending on where B.J. is located in the level. They want to kill you, of course, but they also want to be situated in a place that makes you killing them feel incredible. It’s rather thoughtful of them, really. 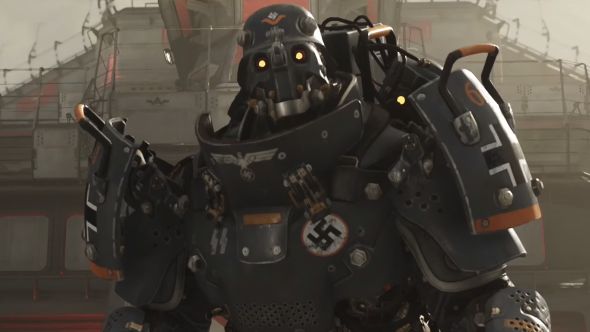 While the through-the-gun team and animations carry a lot of the weight in Wolfenstein II, there is one oft-overlooked area in videogame development that delivers a huge contribution to the overall feel: the sound design, much of which is captured by extensive foley work.

“I think half of gunfeel comes down to audio,” Ojerfors suggests. “We have an audio team that spends a lot of time on the weapon sounds – they’ve been doing trips from shooting ranges where they record sounds for different kinds of weapons. Usually our weapons are kind of extreme, but it’s important for us to make sure they feel authentic, that they feel real, even though they might not exist in the real world. So we base our weapon sounds on real-world weaponry, but lasers don’t do a lot of sound, you know? We have to be creative there, creating a cool soundscape for that.”

So, the next time you are firing a gun from each hand at an incoming Nazi, watching as the plaster cracks off a the wall, blood spatter grips to your surroundings, the sound pounds in your ears, and his dead body tumbles over a balcony minus a leg, spare a thought for all the components that fit together to make it all work. Show some appreciation for the gunsmiths at MachineGames.