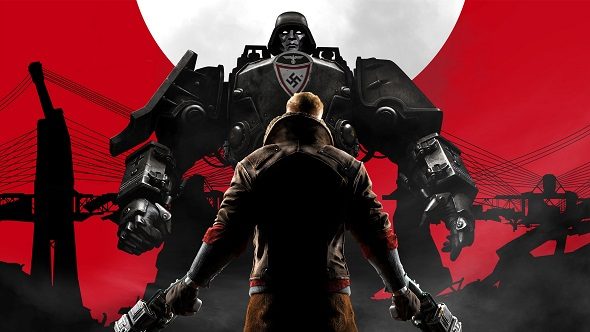 Nazis have been a staple antagonist in videogames for as long as avatars have held guns. These enemies are usually just fodder, existing purely to be shot… If only we could talk to the Nazis, eh? Eh? [Look, I wasn’t even on the magazine at the time. Stop these swipes now, Kirk – dep ed] Well, Wolfenstein: The New Order just about adopted this centrist fantasy, letting us eavesdrop on German soldiers as we scout out bases, and even forcing us to serve them drinks aboard a train bound for Berlin. While there’s still plenty of time dedicated to blowing Nazis into manageable, meaty chunks, The New Order is surprisingly heartfelt in its downtime. This ethos will carry into the forthcoming sequel, The New Colossus.

Here’s everything we know about Wolfenstein: The New Colossus.

Not only is it fleshed out with a cast of complex, pained characters, Wolfenstein dares give us a peek into the awful Nazi regime’s twisted ideology, albeit through a lens of absurdity. Just as it’s viable to crouch around a corner and listen to Nazis complain that they’re actually the ones who are persecuted, you can just as easily wade in with an LMG in each hand and pop off their helmets in a hail of lead. The game opens with you murdering Nazis from a wheelchair, for god’s sake. Ridiculous as it is at times, MachineGames don’t think Wolfenstein is a joke.

“We take what we’re doing extremely seriously, which is interesting in a game like this that’s incredibly over-the-top,” MachineGames’ creative director Jens Matthies tells us. “We love that kind of fusion between things that are decidedly not real and things that are incredibly real. We think that breaking point between those values is extremely interesting to explore. We don’t censor ourselves in that process, but that doesn’t mean we’re casual about it. We think a lot about it and we think what is right for the game, but once we’ve done that, people can have their opinions about it and that’s fine. That’s not really up to us. All we can control is what the game is.” 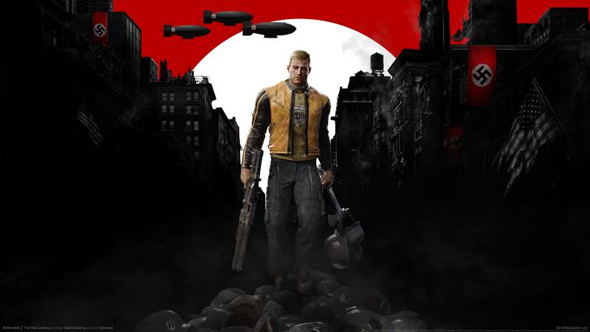 However you feel about that blend of the cuttingly real (especially in today’s world) and the ridiculous, there’s no denying that MachineGames are responsible for one of the best attempts at perfecting this balance in videogames. They’re not the first to try it in games, of course. And, over in the world of film, there have been both successes and failures at creating this marriage of biting political satire with over-the-top violence and absurdity.

“Inglorious Basterds and Django Unchained are two good examples,” Matthies says, “but you can also do it poorly, of course. When you start putting some framework of rules around what you can and can’t do, then that’s just a recipe for poor creative outcomes. [Wolfenstein and those films are similar] in a sense that those are projects that haven’t been processed or passed for approval through a marketing department. It’s unfiltered creative expression, and that’s very much what we’re going for with Wolfenstein, which I think is at harmony with what the original Wolfenstein 3D was. Bethesda is an amazing publisher. The philosophy from Bethesda is to give as much creative freedom as possible to their developers, and that’s why we love being in this company.”

When it was announced we were getting a modern Wolfenstein I don’t think anyone expected it to be what it is. Most probably assumed it would be a dumb shooter with dumb characters – Duke Nukem vs fascists. There’s much more to it, however. It feels like it’s a game with something to say. One that isn’t trying to be apolitical. 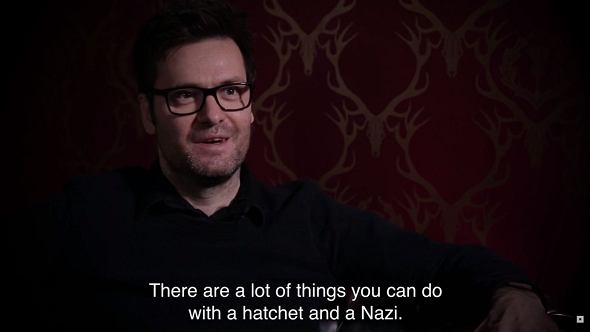 “I think it’s easy for that to turn into something pretentious, but that’s not really what it’s about – it’s more about really strong creative merits, and you can have really strong creative merits in anything if it’s approached carefully and thoughtfully,” Matthias explains. “We always have a main story theme for the whole game. For this game, the theme was ‘catharsis’ – that’s something that flows through all of the character arcs for all of the characters, and also the main story itself. We found that to be a very good way of working, because when you’re just staring at a blank sheet of paper and you’re trying to write something, unless you put some sort of boundary on what you’re trying to say, it will be a mess. So we’re trying to clearly define early on what it is we’re trying to say, then that can infuse every conversation and every beat of the plot.”

It’s funny, because when development on the project began there was no way MachineGames could predict the state of the world in 2017. Still, catharsis! It’s going to be as thematically cohesive as you can get, basically. Of course, this alignment with modern politics was just a coincidence, though it helps that MachineGames refuse to hold back in their depiction of Nazis as they were.

“[Creating the game in the current political climate] is a little bit surreal,” Matthias laughs. “We are making a game about Nazis and Nazi ideology – those are central themes in the game. You can cartoonify that and try to sidestep it, but we decided early on that that’s not what we’re going to do. So, for sure, because we have these themes in the game, the game will always be political, but it’s not a commentary on current events. We just focus on trying to make the best possible game that we can and things happen around us, but that doesn’t really matter to the game itself. I think it’s all about what the game is about and what the creative goals are. To us, this is our artform. We spend so much time making the game, thinking about everything that’s in the game, so we want it to be a timeless work of art. So that’s what we’re going for.”