Machine Games’s first reinvention of gaming’s stalwart Nazi-killing simulator was one of the finest first-person shooters in recent years, so we’re more than a little bit excited about the forthcoming sequel, Wolfenstein II: The New Colossus.

Related: here are the best first-person shooters on PC.

Picking up right where The New Order left off, William J. Blazkowicz once again awakes severely injured and under attack with no option but to continue his tireless fightback against Nazi rule. Meanwhile, Americans are still living under the boot of fascism, with slavery, German lessons, and victory parades now the norm. Your job is to end all this racist revelry by igniting a second American revolution and shooting up lots and lots of Nazis. All of the Nazis, in fact. In the face.

Of course, the all-important scrap of info is when we’ll be able to get our hands on the game. Thankfully, Bethesda came right out with it, confirming the release date for Wolfenstein II: The New Colossus: October 27, 2017.

What better place to start than with a whopping eight-minute Wolfenstein II: The New Colossus trailer? It shows off heaps of gameplay, some suspenseful cutscenes, and generally brings you up to speed on B.J.’s latest Nazi-riddled predicament.

Bethesda have also gone all out with their marketing campaign for Wolfenstein II: The New Colossus, making a couple of live-action clips from in-universe TV shows and adverts like German or Else and Liesel, which perfectly capture the sepia-toned early days of television, albeit with a particularly Wolfenstein twist. Watch both below:

If you loved charging through corridors and gibbing Nazis in The New Order then you’ll have just as much fun tearing fascists apart in Wolfenstein II: The New Colossus. Machine Games have opted to tweak, rather than overhaul, gameplay for the sequel. The game maintains the pace and ferocity of its forebears, but outfits B.J. with a few new combat options like mix-and-match dual-wielding and hyper-mobile power armour.

Wolfenstein II: The New Colossus still lets players choose between a guns-blazing or stealthy approach, but as in The New Order, it’s at its finest when you’re carving through bad guys with an automatic shotgun in each arm. This time around, however, you’ll get to choose your own dual-wield pairing, whether that’s an automatic shotgun and Sturmgewehr, a couple of Maschinenpistoles, or a silenced Pistole and Dieselkraftwerk combo. Now you can be exactly the kind of Nazi-destroyer you want to be.

Another major Wolfenstein II: The New Colossus gameplay addition is a Da’at Yichud Power Suit that allows Blazkowicz to cover ground with terrifying speed and execute Nazis with an all new set of combat takedowns. The Power Suit also lets B.J. shrug off fall damage, which is particularly useful for dropping down behind an unsuspecting Nazi grunt. Other tricks include built-in stilts that let you climb up to higher ground and the ability to send foes sprawling by sprinting into them, and even instagib them if their health is sufficiently low. Also, the Power Suit’s Constrictor Harness lets you crawl through vents to access new areas – a useful mechanic for stealthy players.

Just as The Old Blood let you mash zombies into a fine paste with the Laderoboter, The New Colossus also has some joyously overpowered vehicle gameplay courtesy of a captured Panzerhund. Your primary weapon while controlling this mech is a powerful flamethrower capable of incinerating any enemy you come into contact with. It has got some serious range as well, letting you light up any and all Nazi scum in sight provided you can arc the stream of fire just so. 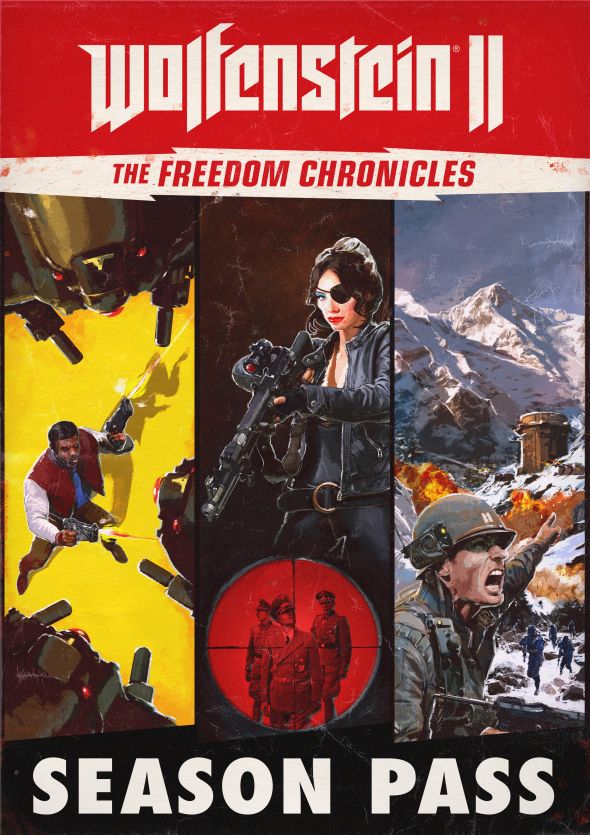 Talking of which… Wolfenstein: The Old Blood was the only bit of DLC Machine Games released for The New Order, and it was absolutely brilliant. Thankfully, then, there’ll be a whopping four sets of DLC missions as part of The New Colossus’s season pass, called The Freedom Chronicles. That includes the prequel chapter, Episode Zero, which will introduce all the new DLC characters. You can also get it as a pre-order exclusive through Steam. £17.99 is the confirmed UK price, so we’re expecting a playthrough of between six and ten hours from the season pass.

Here’s what Bethesda say you’ll be doing in The Freedom Chronicles:

B.J. likes guns: they’re great for killing Nazis, after all. Wolfenstein II: The New Colossus’s weapons are a mix of firearms from The New Order and The Old Blood, as well as a few new bits of kit like the Dieselkraftwerk grenade launcher. The main tweak to B.J.’s arsenal are the three distinct weapon upgrades you can equip to each weapon in the game. We’ve compiled a full list of all the confirmed Wolfenstein II: The New Colossus weapons so far, their available upgrades, and how they feel to shoot with, should that be your cup of the proverbial. 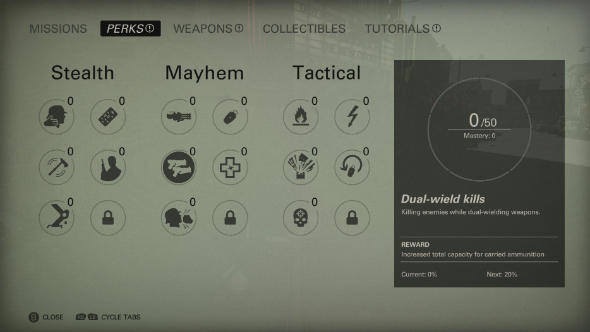 Returning from The New Order and The Old Blood is an extensive list of buffs you can earn for Blazkowicz by completing combat challenges. This time around however, the perks chart has been simplified with three perk trees rather than four: Stealth, Mayhem, Tactical. Machine Games have also outfitted each perk with a number of ranks this time around, allowing for specialisation that better reflects your Nazi-killing style. We’ve spent some time digging through the game’s menu to find out what every perk is, so if you’re curious, check out our Wolfenstein II: The New Colossus perks deep dive.

That’s everything Wolfenstein II for now, but we’ll be adding to this feature as and when we learn more about the game, so check back for regular updates.