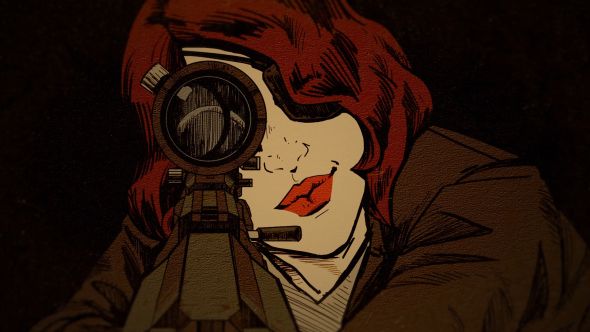 The latest DLC for Wolfenstein II is out now. The second of three DLC episodes – collectively known as The Freedom Chronicles – is currently available on Steam.

The Diaries of Agent Silent Death is, somewhat obviously, pretty focused on stealth gameplay. In the episode, you play as former OSS agent and assassin Jessica Valiant (codename: Agent Silent Death, in case it wasn’t already clear). Valiant’s mission takes her to the studio of Paragon Pictures. Before the war, the film studio was the toast of Tinseltown, but since the German invasion has become a central part of the Nazi propaganda machine. Screenshots from the Steam page even show the set of ‘German or Else’ one of the fake TV shows put together as part of Wolfenstein 2’s marketing program.

As well as the new DLC, today also marks the roll-out of a free update, improving difficulty balancing and UI.

You can download The Diaries of Agent Silent Death on Steam right now for £7.99, or purchase all three of The Freedom Chronicles in the season pass, which also gives you access to the already-released The Tales of Gunslinger Joe.