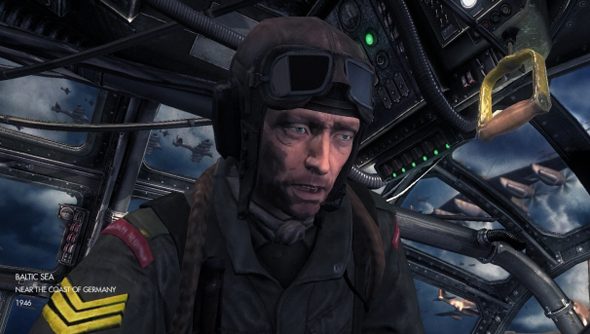 Bethesda have begun a streaming series named TwitchWorks – and each week they’re planning to play through a chapter of Wolfenstein before bed, so that we can be lulled off to sleep by the Swedish tenors on the MachineGames team.

The commentary begins at the hour mark. MachineGames creative director Jens Matthies and Wolfenstein exec producer Jerk Gustafsson tell us that for technical reasons, the fighter plane hurtling through the game’s opening sequence is actually static. Instead, everything around it is moving, and the designers had to create the impression of flight.

The illusion lasts, even while B.J. Blazkowicz opens the side door of the plane to allow his pilot to hurl himself onto the wing of an adjacent, burning bomber.

“This is pretty much where we set up the world as larger than life,” said Matthies. “This is not your realistic shooter. This is the kind of epic adventure you get in the Wolfenstein universe.”

A bit later, the pair talk about the difficulty of introducing Private Wyatt offscreen.

“In the story we set up Private Wyatt as a sort surrogate son and Fergus Reid as a father figure,” said Matthies. A relationship that’s established over the radio. Nice.

Do you think you’ll be sat around the wireless to hear more next episode? Our Steve judged Wolfenstein: The New Order to be a “masterpiece of its genre”.