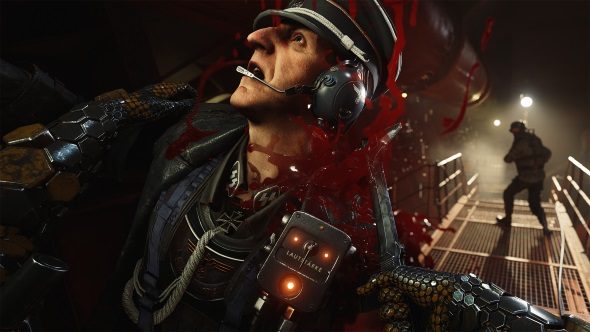 You’d think that this wouldn’t be a point of debate. Not only was there a fairly significant war fought over this point (the Nazis lost), but the Wolfenstein series has been running since 1981. You’d think that after 36+ years of stabbing, shooting and generally killing Nazis, someone might have picked up on the themes of this franchise. Apparently not.

It seems unlikely we’ll be running out of Nazis anytime soon, but there’s plenty of other things to shoot on PC.

Gearing up for the release of Wolfenstein II: The New Colossus at the end of this month, Bethesda have stepped up the marketing for the game, including a swathe of new trailers and clips on YouTube accompanied by the #NoMoreNazis hashtag, and featuring the slogans ‘Not My America’ and ‘Make America Nazi-Free Again’, referencing the setting of the game; an occupied America in an alternate history where the Nazis won WWII.

Contrary to all common sense, this has upset a subset of very angry individuals, some of whom seem to be proudly flying swastika flags on social media. They are keen to impress on Bethesda that it is impolite in this day and age to suggest that violence ever be considered a valid tactic to use against people with different political views, even if those views are centered around militarily enforced genocide and/or ethnic cleansing.

In a statement from Bethesda marketing boss Pete Hines (which can be read in full on GameIndustry.biz ), he outlined just how surreal this situation is, with the studio having throught that the time for debate on the issue had passed over 70 years ago, and that the company would not be budging from its now seemingly controversial stance that Nazis are Bad. This particular quote rings especially true:

“Wolfenstein has been a decidedly anti-Nazi series since the first release more than 20 years ago. We aren’t going to shy away from what the game is about. We don’t feel it’s a reach for us to say Nazis are bad and un-American, and we’re not worried about being on the right side of history here.”

Somehow, the previous Wolfenstein game – The New Order – avoided this particular debate, despite having an entire chapter in which Polish-American (of Jewish descent, too) protagonist B.J. Blazkowicz infiltrates a horrifying Nazi concentration camp, reminding us why it would be better to do away with Nazis as expediently as possible. It seems unlikely that the sequel will be pulling any punches, either.