Wolfenstein: The Old Blood launches next Tuesday. It’s a stand-alone prequel to Wolfenstein: The New Order — a shooter that I unashamedly consider to be one of the greatest things ever made — that sees BJ Blazkowicz storming through the actual Castle Wolfenstein itself and boshing the Third Reich on their big, idiot Nazi noses with his all-American hero fists.

I have been playing it. It’s good. Here are words.

It sees the series protagonist off out in search of the co-ordinates to Deathshead’s compound, the fortress featured at the beginning of The New Order. Beyond that, there’s little required reading to appreciate what’s going on in The Old Blood. MachineGames intend for the game to be perfectly legible to players who haven’t experienced the previous title, though it’s peppered with references that returning Wolfensteiners will appreciate. 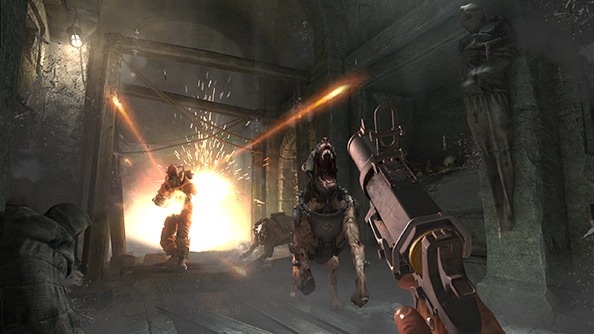 Not that MachineGames ever allow plot, character or story to get in the way of what their game does best. The Old Blood is every bit as sharply designed a shooter as The New Order was, featuring a carefully balanced mix of satisfyingly blammo weapons and wonderfully reactive enemies whose bodies reel and lurch and snap with every gunshot. It’s still a game in which it feels really nice to murder people with guns.

Everything I gushed about in my The New Order review has returned: the keenly self-aware and quiet reverence to Wolfenstein 3D appears in the form of the carpet-and-stone interiors of the eponymous castle, but you’re never smacked over the head with smugly overt nods to the past. Strewn throughout, however, are brazen references to other Bethesda titles: one of the first rooms I entered contained a familiar looking armour pick-up in the form of Skyrim’s iconic horned iron helmet.

Levels aren’t quite as linear in the chapters I played, they seemed to loop around and branch off in two or three different directions from a central hub. Gaining access to the castle’s keep was a matter of unlocking two large bolts barring the entrance for example, which meant scooting off down two different tunnels in search of access to the switches on either side of the door. 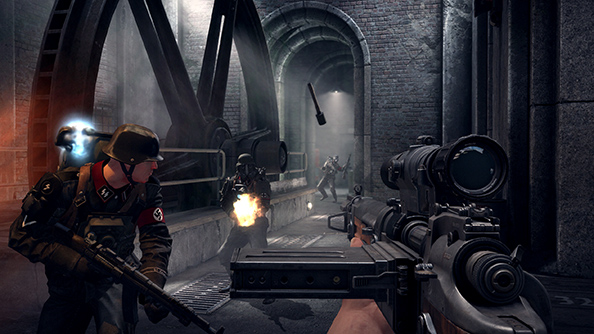 It’s perhaps less different to The New Order as you might have been expecting. The focus here is still very much on shooting all of the blood out of bad guys with comic machismo, interspersed with more quietly narrative areas in which you may gunlessly explore your surroundings. Think of the coffee bit from The New Order, where the coffee slooshed around all realistic and that, that’s sort of gunless walkabout fun I’m on about.

More broadly speaking, MachineGames seem to have had more fun with the non-combat interactions in The Old Blood. Exploration yields loads of hidden content, with BJ fiddling with ornaments, mouthing off about details in his surroundings or having Nazi guards salute him while he’s incognito. There’s a lot more schlocky incidental dialogue to be overheard too, with my personal favourite being an eye-rolling conversation in which one Nazi stubbornly corrects the grammar of another.

BJ has access to a few new weapons. He’s got a weird pipe-and-knife melee thing that he uses to gut Nazis during stealthy bits, that can also be used to scale certain walls in the game. There’s a new and massively overpowered shotgun that, like all other weapons in the game, can be dual-wielded to devastating effect. A grenade-launching pistol behaves as you’d expect, summarily separating Nazi limbs from Nazi torsos. 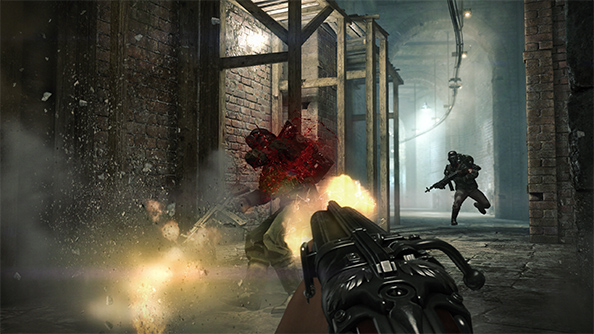 Some new enemies make an appearance too, though they fold so neatly into the ranks of Wolfenstein’s existing army that you’d be hard pressed to tell them apart from the soldiers you’re used to fighting. There’s a new challenge mode too, that locks you into a room from the main campaign and pits you against waves of these enemies, awarding you points for successful and stylish murderising.

That seems to be the hallmark of The Old Blood: it feels fresh, but not entirely removed from the game we played last year. Much like The New Order, here’s a game that knows exactly what it’s doing and expresses that with confidence, style and skill.

Calling this “more of the same” would sound dismissive under other circumstances, but I love The New Order so much, I would play a dozen more Old Bloods and run around as BJ Blazkowicz for four thousand more hours before I ever got tired of this brand of gutsy, punchy, mad Nazi shooting fun.

The Old Blood is more of the same, and that is good.