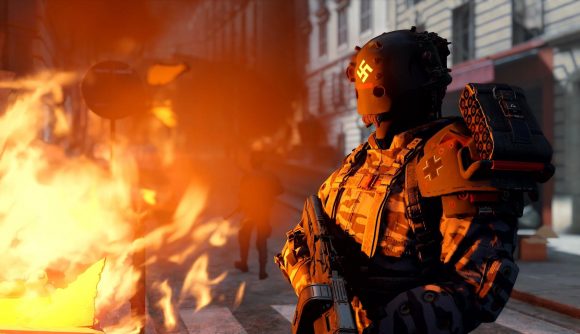 Wolfenstein: Youngblood is a co-op focused game that’s launching at a budget price next month. It will have microtransactions that let you buy skins and emotes with real-world money, and word came out during previews this week that you could buy upgrades for weapons that way, too. Today, Bethesda has confirmed that this is not the case, and all microtransactions are cosmetic only.

You can purchase weapon skins with real money, as Bethesda tells VG247, but not upgrades or attachments. Whatever statement to the contrary came up earlier this week seems to have been a misunderstanding. Microtransactions will let you purchase cosmetic items only, including character skins and emotes alongside these weapon skins.

Even the official Wolfenstein Twitter got out to confirm the news. Weapon upgrades and attachments can all be purchased with in-game currency found around the levels, but you don’t have to pull out the credit card for these purchases.

Check out our Wolfenstein: Youngblood gameplay preview for more on how the videogame under the microtransaction confusion actual works.

If you missed the Bethesda showcase, you can catch the highlights above.

Check out the E3 2019 games list in full – the show’s coming to a close, but we’ve got plenty more to bring you on these titles.