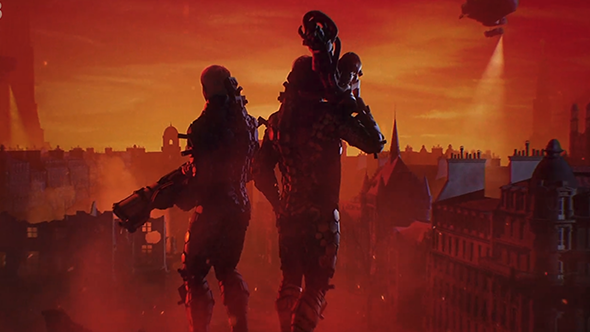 Leaping forward in time to the 1980s, Wolfenstein: Young Blood is coming in 2019, and will tell the story of BJ Blazkowicz’s twin daughters as they continue to kick Nazi tail – accordingly, it’s playable in co-op.

Pre-orders are already live on Amazon priced at $29.99, indicating it’s not a full-fat release. As you might guess from the title, we can probably expect a standalone spin-off of similar size to Wolfenstein: The Old Blood.

The announcement was made at Bethesda’s E3 2018 showcase by Wolfenstein developer Machine Games, and accompanied by a new trailer, which you can view below. A banner declaring ‘Oktoberfest 1980 in Paris’ hangs between two buildings that could plausibly be Parisian, so it looks like we’re headed to the City of Light.

Wolfenstein 2: The New Colossus made our list of the best shooters on PC, as well it might. Because it’s awesome.

Shots of the city, lit in ominous red, are intercut with shots of BJ’s daughers training. Between pummelling punch bags and hunting deer with rifles, it looks like they’ve been preparing for combat all their lives. The trailer concludes with the girls as adults, each equipped with a suit of the power armour that kept resistance leader Caroline fighting at the end of Wolfenstein: The New Order, and which BJ himself used at the start of The New Colossus.

BJ’s lover, Anya Oliwa, is pregnant with twins at the end of Wolfenstein 2: The New Colossus, which is set in 1961, making the girls 19 or so. BJ himself provides the narration to the trailer, though he doesn’t say much of note other than to encourage his daughters to stay tough and take the pain.

Other than his voice there’s no sign of BJ himself in the trailer, though with a birthday in 1911, there’s no reason to assume he’s dead.

There’s no sign of a Steam page yet, but if you’d like to pre-order via Amazon, you can go ahead and do that here.