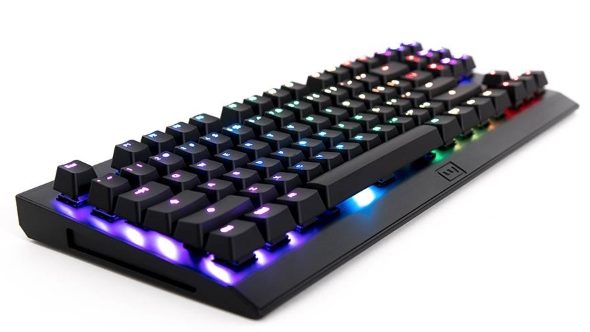 We can’t wait to get our hands on this keyboard, but what are our current favourites? Check out our guide to the best keyboards for gaming to find out.

Last year the Netherlands-based creatives ended their Kickstarter campaign to fund their first keyboard – the Wooting One – after their original pitch impressed the public so much it made €135,786. Their initial goal was €30,000, which they nailed in just seven hours, making the final total a heady 452% higher. And now the Wooting One is finallyavailable for pre-order.

Unlike the binary on-off actuation of a traditional keyboard, the One’s Flaretech switches use infrared light and a pair of sensors to bounce light off the back of the keycap. The time the light takes to bounce back tells the sensors how far down the key is pressed. If that sounds familiar it’s because there have been other companies trying to develop analogue keyboard tech too. The Aimpadwasa similar project, whichtanked on Kickstarter, though they do claim to have their technology going into other company’s devices soon.

The Wooting One’s Flaretech switches though are also configurable to register different inputs with double-taps as well as the analogue inputs. In certain games you may want a single tap on the ‘C’ key to register as the letter ‘C’, and the double-tap to register as ‘Ctrl + C’.

This increased control in key movement means you’ll be able to play driving games with previously unreachable levels of subtlety via your keyboard, moving the steering wheel in increments an all-or-nothing binary keyboard wouldn’t allow. Arguably more important though, Wooting claim you will be able to control the walking speed in adventure games and FPS’s with much more finesse too making stealth with a keyboard and mouse more usable. The sensitivity of the keys can be adjusted, allowing for the nimble-fingered and heavy-handed alike.

This is an extremely exciting prospect for us gamers. As Wooting put it, ‘This is our invitation to you, to join Wooting as a founder of analog keyboards and together we can change the industry.’

And changing the industry is something this could well achieve. In a world where customers are rightfully suspicious of companies promising game-changing advances (we’re looking at you, No Man’s Sky), this particular start-up might just deliver on the hype.

If the Wooting One works the way it’s claimed to it’s possible other hardware heavy hitters will pick up the infrared tech and run with it. Over the next few years we could see a shift to analogue keyboards like this one becoming the industry standard.

So what’s the down side? Well, the Wooting One relies on integrated support from game developers to work in-game – games that neglect to support existing analogue tech like controllers would need additional work from the developers to allow the keyboard to work to its full potential. Wooting though have made the keyboard fully available to developers, so with any luck we’ll be enjoying analogue keyboard gaming on our favourite titles in the near future. 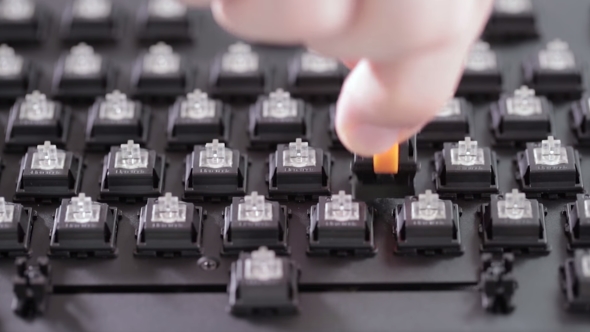 The analogue switches shouldn’t affect the feel of the board for just regular typing, with Wooting claiming that the One ‘types just like any other mechanical keyboard.’ The premium board bundle comes with red and blue swappable Flaretech switch types included, offering both smooth linear switches as well as louder, clicky ones.

This premium option will set you back an extra €40 ($45/£35) however, bringing the already very expensive total up to €220 ($247/£190) in North America as opposed to the basic version’s €180 ($202/£156). The cheaper basic version though still comes with your choice of analogue switches and includes an additional four red switches and four blue switches as a ‘first aid kit’ for your new board.

According to the Wooting online store, the One is estimated to be arriving on people’s doorsteps in July, so we won’t have long to wait.

The style-conscious may look at the Wooting One and switch off a little, but the MX style keycap stems on the keyboard will allow those who aren’t convinced by the barebones, all-black aesthetic to swap out the keys. Wooting sell it as a ‘low-profile, minimal design’ choice due to their wish to ‘break the gaming stereotype’, but it will include individual RGB backlighting and swappable top plates for those who like their gaming turned up to 11.

So, do you think analogue gaming keyboards will catch on? Will it be worth the asking price? Let us know what you reckon in the comments.