World of Final Fantasy is a spin-off from the famous JRPG series that released for the PlayStation 4 in October last year, to generally favourable reviews. Publishers Square Enix have announced that it’s coming to Steam in less than a month: release is set for November 21.

Save the world from more vague apocalypses in the best RPGs on PC.

Story-wise, it’s typical Final Fantasy stuff: twin siblings Lann and Reynn are out to save the land of Grymoire from world-consuming powers, such as the invading Bahamutian Army and civil strife within the native Lilikins. Also, they have amnesia and can change their size at will. Sure.

Look, the important thing is that Lann and Reynn have the power to capture and command Mirages, the monsters of Grymoire. Yes, like Pokemon. It’s Final Fantasy Pokemon. There’s very little about this not to like. See this screenshot for proof of Behemoth pets: 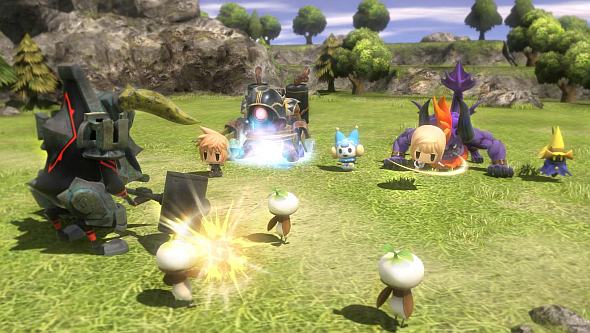 Monster hunting is hardly new to Final Fantasy games, but this is one of the few that lets you deploy them in battle (the underwhelming Final Fantasy XIII-2 is the only other that leaps to mind, though I could well be forgetting some).

The chance to play with some of the series’s iconic monsters is obviously a big part of the draw, and since this is a spin-off, callbacks to other Final Fantasy games are even more abundant than in a numbered entry. There’s a Sephiroth summon, for one.

World of Final Fantasy’s Steam page isn’t up at time of writing, but you can check it out on the Square Enix store, where it’s priced at $39.99. For more, here’s the website.