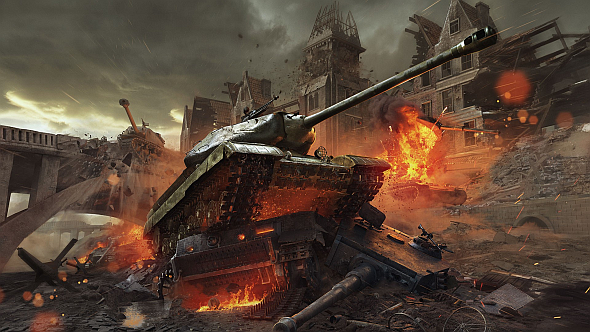 World of Tanks 1.0 rolls out today, and brings with it a graphical overhaul. But it’s very important to the developers that you shouldn’t need to upgrade your own hardware, too.

For more affordable mayhem, check out the best free games on PC.

“The key formula is do the right thing. Better graphics, which do not bring down the performance of your PC – good or bad? It’s good. Alternatively, amazing graphics which require a $3,000 rig – good or bad? Bad. Don’t do it, or do it so it runs – and this is why [version 1.0] took so much time – on your old laptop, on which you played the previous version of World of Tanks. That will run 1.0.”

This uncompromising approach to optimisation is particularly important for World of Tanks, given its popularity in markets where incomes and PC configurations range widely.

“That’s a lot of work on all those zillions of configurations of old PCs, like five- or six-year old PCs in Russia, China, Poland, Czech Republic, everywhere in the world. Given our 150 million people who play the game – not everybody has this $2,000 Alienware. But our numbers demonstrate the game does work.”

To get a sense of how gorgeous the game is about to be, check out our World of Tanks 1.0 preview, which has some nice comparitive screenshots. If you’ve ever been curious about World of Tanks but have yet to take the plunge, remember this is an evolving game that has only now decided to award itself a 1.0 version number. Here’s our take on how far the game has come.