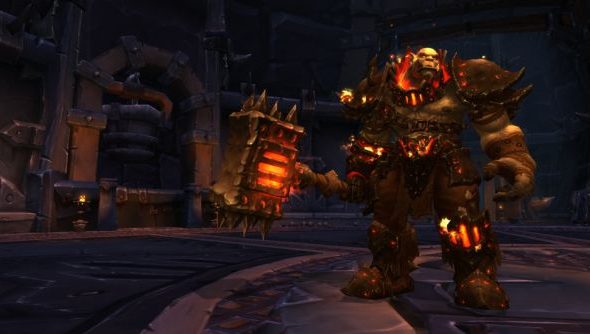 A grand raid opening doesn’t just happen the once. While the Blackrock Foundry will welcome players at Normal and Heroic difficulties from February 3, Barbara Windsor or whoever will have to return to cut the ribbon again on five subsequent occasions over two months. There’ll be new wings of the orc weapons factory unlocking week by week.

The halls we can’t yet prowl, however, we can read about. Blizzard have started talking up the Warlords of Draenor raid we’ll start to get to know in February.

Blackrock is the starting point of all the steel the Iron Horde have been waving in the player’s direction since they landed in Draenor. By going in there, you’ll be disturbing the “massive” giants heating the forges, the flamebenders imbuing the ore, and the engineers shaping the slag.

You’ll need a minimum item level of 635 to enter the Foundry via Raid Finder, and should expect rewards at item level 650 – though they range up to 695 in Mythic difficulty.

Gruul is the boss of the Slagworks, unlocked on February 17. Once known as the Dragonkiller, the gronn great father has been forced into labour by Garrosh. His hand has been replaced with a hook, so that he might more easily haul pallets of fuel to the furnace or make holes in heroes.

He’s backed up by Oregorger, the largest of the rock-eating goren who’ve burrowed into Blackrock’s storehouses, and an ancient primal force that’s taken up residence in the blast furnace.

The Black Forge (February 24) is home to Hans’gar and Franzok, twin orc outcasts with a talent for brawling, as well as Flamebender Ka’graz of the Burning Blade and a humongous magnaron – who, for reasons known only to himself, has been using his huge stone fists to help out with the Horde’s siege machinery. They’ll make short work of knocking the dents out of you and your raid chums, too.

The Iron Assembly (March 10) is where you’ll find most of the orcs: a beast trainer named Darmac, an artillery-master called Thogar, and the Iron Maidens – leaders of the Horde’s fleet.

Finally, you’ll find Blackhand himself in the Crucible (March 24). The Blackrock clan warlord prefers an environment of blistering heat and carries a smoldering slag hammer.

Think you’ll be dedicating a chunk of your February and March to besting the foundry?