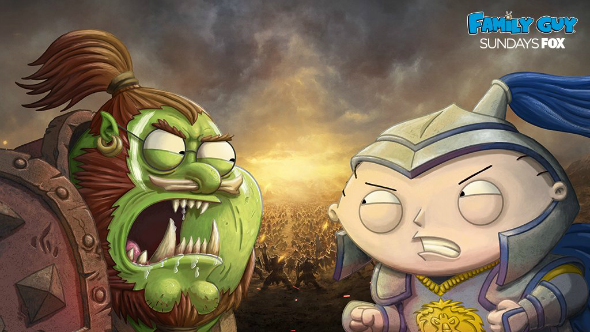 Peter, Brian, Stewie, and the rest of the Family Guy cast are heading to Azeroth. Fox confirmed a special World of Warcraft-themed episode will air this week.

It’s a frankly stunning display of a company who are right on the pop-culture button. Indeed, it’s less than two years since the Warcraft movie had a less-than-stellar critical and commercial reception, back in 2016. Fox’s bravery in tackling an IP which clearly doesn’t resonate with middle America is astounding.

Leeroooooy Jeeeeeenkins!!! Tune in Sunday at 9/8c on @FOXTV for some @Warcraft magic on #FamilyGuy. pic.twitter.com/EcLeP4UxT1

For those keeping score at home, it’s also been more than 11 years since another beloved American cartoon series aired its own take on World of Warcraft. South Park’s ‘Make Love Not Warcraft’ aired in October 2006. Given WoW first became available in 2004, that means it still took Matt Stone and Trey Parker two years to come up with the idea. By contrast, it will have taken Seth MacFarlane nearly 14 to come up with his own similar idea. It does seem that Family Guy’s take will be based more on the Warcraft movie than the game itself, but it’s still far from cutting edge at this point.

American audiences can watch the Family Guy World of Warcraft episode at 8/9c on Sunday, April 1 (lending suspicion that this is just an April Fools’ prank, but I’m going to throw caution to the wind and assume it’s not) on Fox. Elsewhere in the world, you’ll have to wait for your respective channels to air it, because I’m sure none of you are nefarious enough to stream it online.