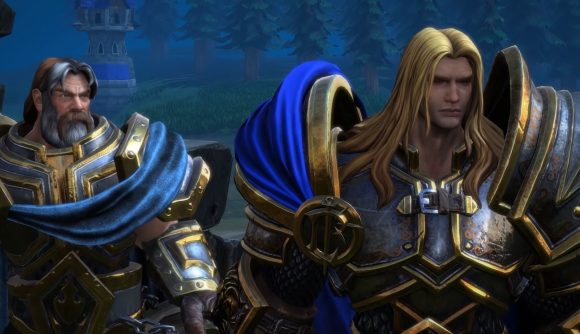 These are exciting times for fans of actors whose names end in ‘ill’ being cast in a totally hypothetical World of Warcraft movie. After various back-and-forth Twitter rumblings that had many speculating about the idea of Witcher star Henry Cavill playing The Lich King in a WoW movie, one fan has gone ahead and mocked up a portrait of Star Wars legend Mark Hamill as the paladin Uther the Lightbringer.

It all started a few days back, when World of Warcraft‘s associate narrative designer Anne Stickney responded to a tweet of Geralt’s Witcher Season 2 armour, to which WoW author Christie Golden replied “on the Arthas train” – referring to the pre-lich-ified paladin. A WoW guide writer, who goes by ‘Slayer Aernath’, agreed, and then asked Warcraft co-founder Chris Metzen for his take.

“That Henry [Cavill] would be a good Arthas or that he’s dreamy?” Metzen asked. “Clearly both… d’uh.” Since then, art director BossLogic has uploaded a piece of concept art depicting Henry Cavill as the Lich King, complete with armour and glowing, ice-blue eyes – to which Cavill replied, tagging Blizzard with a ‘thinking’ emoji.

Taking the idea and running with it, Reddit user Lilleanon has illustrated a concept of Star Wars actor Mark Hamill as Uther the Lightbringer. Here’s Hamill in all his righteous glory:

With all the rage on Henry Cavill as Arthas, Hazelgee (DeviantArt) presents Mark Hamill as Uther. from wow

Not everyone is convinced though, with some commenters suggesting that Hamill’s voice acting experience (such as his iconic Joker role) would make him better suited to playing a villain, such as necromancer Kel’Thuzad.

There’s no official word on such a movie – or its eventual casting – even existing, but it’s been great to watch everyone geek out about it online. At least Cavill fans have some juicy plot reveals from The Witcher Season 2 to keep them going.