On June 9th, 2018, almost 900 trolls set off, sprinting across World of Warcraft’s Azeroth to raise money for The Trevor Project. The non-profit focuses on suicide prevention among LGBTQ+ youth so the run serves as a Pride month celebration. Participants are encouraged to customise their trolls to get in as much colour as possible, as if to create a moving rainbow of avatars across the lands.

The trolls spilled out from their starting area, piling on to zeppelins headed for Tirisfal. From there, they ran through the Plaguelands, through the Ghostlands portal, and all the way to Silvermoon City.

After a World of Warcraft alternative? Try the best free MMOs on PC.

Runners and supporters donated $3,384 directly, and sales of shirts featuring an adorable, bright-haired troll netted at least another $811 for the effort. That’s a total of $4,195 for The Trevor Project to use on its hotline and educational resources.

Organiser Dravvie has been coordinating these events for years. First there was the Running of the Gnomes – a similar event raising money for breast cancer research. “The Gnome Run started as something for friends, and grew into something much larger unexpectedly,” she tells me.

“One very common bit of feedback that I received was that people really wanted something for the Horde side. The other common, albeit frustrating, bit of feedback was that people felt like they wanted an event for men, commonly forgetting that breast cancer affects everyone, no matter their gender. So I did my best to honour both of those wishes, but in the best, most productive way possible.” 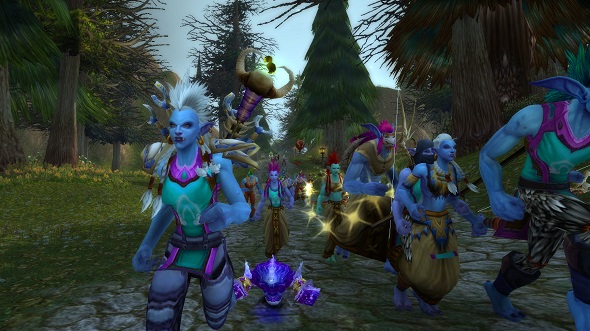 And so the Running of the Trolls was born. Dravvie chose The Trevor Project since men have higher suicide rates than women, as well as to help all members of the LGBTQ+ community who may struggle with depression or bullying.

The run is always a test of Dravvie’s management skills and patience. Getting so many players to the right place at the right time on the right server is anything but easy. “Organising the event is an exercise in social networking, planning ahead, and being willing to go with the flow completely,” she tells me. “Each time I learn something new that I can use for the future, but I never know what will happen next as I can never predict the amount raised or the people coming.”

For example, for the first ten runs, she and other volunteers had to invite every participant manually, but luckily, she now has an add-on that automates the process. She first deployed it at the last Gnome Run, which had over 7000 participants. 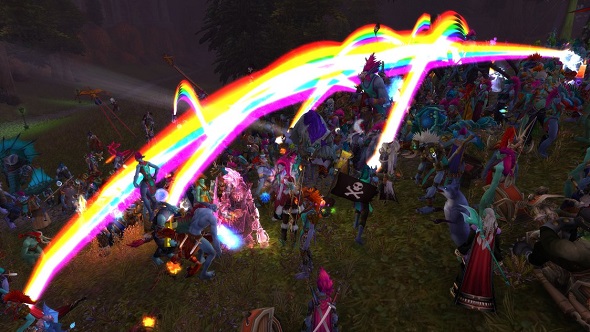 But even with all the help she can get the day of the run remains pretty chaotic. “It’s a bit like hosting a very large party where you get to see a lot of your friends and meet many new ones, but you’re still trying to keep the party running,” Dravvie says. People flood her in-game inbox, Discord, and social media with questions, and she has to coordinate with other volunteers. “It’s a lot of conversations all at once!”

But she has pulled it off for another year, despite the growth, the increased expectations – especially with growing interest in the game due that incoming Battle for Azeroth release date. For one day, hundreds of people flooded the server with rainbows and troll characters of all kinds, running and partying for a good cause. You can get in on it too as it’s not too late to donate to The Trevor Project in honour of the run.