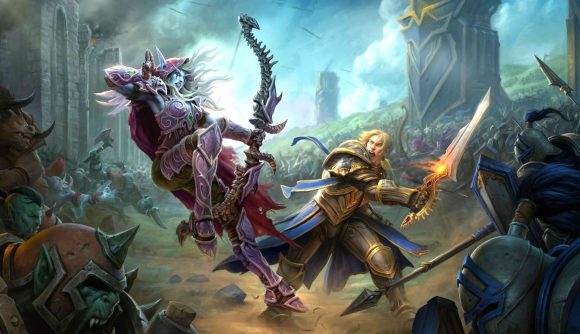 It looks like some retro-style raids and a battleground inspired by days of WoW gone by will soon be heading to the game. World of Warcraft developer Blizzard has posted some development notes for an incoming update which will get you celebrating the game’s 15th anniversary – and it includes three raids featuring “iconic encounters” from previous WoW expansions, plus an “old-school”-style battleground.

The WoW 8.2.5 PTR development notes (via Wowhead) say that a new content update is in the works and will soon be heading to the Public Test Realm, with a breakdown of the goodies in-store. With this November marking 15 years since the MMORPG’s release this November, it looks like the studio is in celebration mode, adding some retro flavour to the game: “Throughout the duration of the event, you’ll be able to participate in three unique raids with iconic encounters from past expansions along with an old-school-inspired Alterac Valley battleground.”

Old-School Alterac Valley is still a bit of a favourite with some WoW fans, who remember it from the days when it was introduced in 2005 and had more emphasis on PvP elements, with huge, sometimes hours-long battles raging away throughout the map. It’s evolved through updates over the years, but it looks like Blizzard will be letting players try out a retro-inspired version for the event.

Rewards for getting into the party spirit are also on offer: “Players who defeat all nine bosses in the raid wings will receive the Obsidian Worldbreaker, a Black Dragonflight mount inspired by Deathwing. Players who participate in Alterac Valley and complete an achievement can earn two new mounts: the Stormpike Battle Ram (Alliance) and the Frostwolf Snarler (Horde).”

Plus, players “who log in during the event period will receive a celebration package in the mail with a Lil’ Nefarian pet and some other in-game goodies.”

In addition to this the update will bring a new timewalking raid called Firelands, a new mode called party sync, designed to help players team up to quest more easily, the return of the recruit a friend feature (which has been revamped), a “fuzzy, buzzy” mount, and more. Head over to Blizzard’s site for all the details on the coming update. There’s no specific date given for its launch yet, but it looks like we can expect it soon.