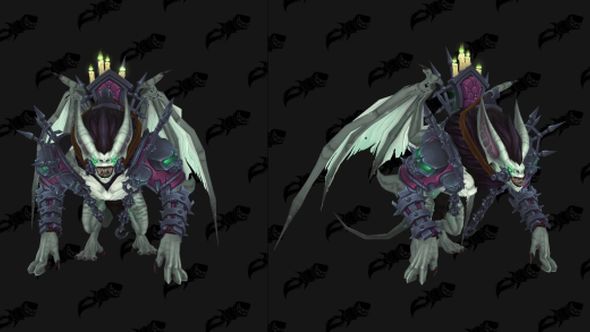 A new Battle for Azeroth alpha build is out, which means more datamining. Today’s searches have turned up a brand new Forsaken Fel Bat flying mount.

Here’s everything we know about Battle for Azeroth.

Felbats are gargoyle-like bat-creatures, who the Illidari have recently been attempting to train as mounts. They are not, however, to be confused with Fel Bats, which are felbats who appear at Legion Invasion locations. Either way, the latter now also has a ‘forsaken’ variant, and Battle for Azeroth will let you ride them.

To be quite honest, that doesn’t sound like something that I’d like to do, as the new Forsaken Fel Bat mount looks pretty scary. It does, however, come equipped with a suitably gothic-looking chair, which is either some impressive forward-thinking from its masters or some remarkable natural selection.

You can get a closer look at the new mount here. The most recent set of datamines also turned up something much more adorable, however, in the form of summonable Vulpera pups.