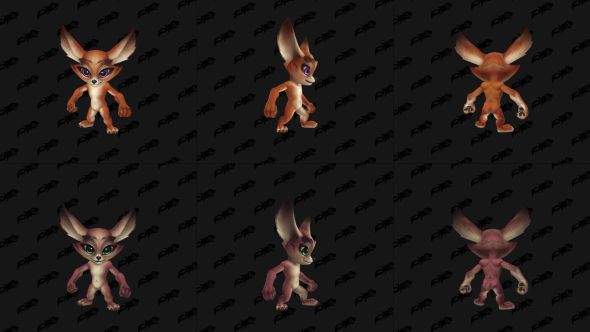 A new World of Warcraft Battle for Azeroth alpha build is live, which inevitably means a new round of datamining. This time, players have found a selection of spells allowing you to summon adorable vulperas.

Family Guy is heading to World of Warcraft.

The Vulpera are an allied, fox-like race who live on Zandalar, an island likely to feature in Battle for Azeroth. The latest datamine reveals two new spells relevant to the race. The first, Fury of the Vulpera, rallies nearby allies of the Vulpera, increasing their haste by 10%. But it’s the second set of spells that I’m really interested in.

As well as the one spell that’s actually useful in battle, there are four more Vulpera-themed spells in the latest datamine, each allowing you to summon a different coloured (but all equally adorable) Vulpera pup. The four available colours are orange, pink, red, and white, two of which you can see in the image above.

Exactly what the purpose of WoW’s latest furry friends is isn’t known, but given the child-like theme, there’s some speculation that these Vulpera kids will have something to do with Battle For Azeroth’s Children Week event – a time when Azeroth remembers the innocent child victims of its ongoing wars. You can get a closer look at the new Vulpera spells here.