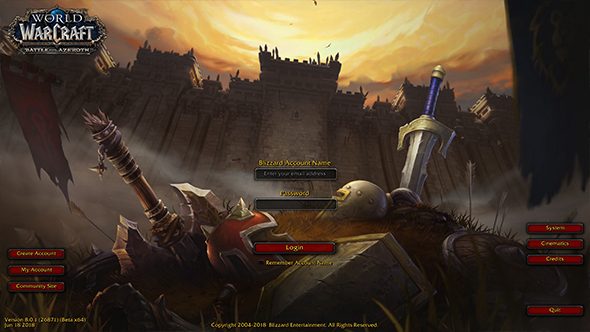 World of Warcraft: Battle for Azeroth has a login screen – obviously. That screen will be new for the expansion – as usual. But now you can see precisely what it looks like right now, and get a lengthy taste of the new musical track that will accompany it.

The new art focuses on the reignited conflict between Horde and Alliance, with arms and armour from both sides strewn around a battle site. Tattered banners fly at either side, and birds circle over the fortress that looms in the background. Everything enjoys a subtle animation pass giving the appropriate elements a bit of motion.

Stay current on the genre with the our list of new MMOs.

This is all accompanied by the main title track ‘Before the Storm,’ composed by Glenn Stafford with the additional arrangements of several classic themes from World of Warcraft’s lengthy and storied past. (You can listen to that track in full right here.) The new login screen is now live as part of the PTR, so you can see it yourself there, but our look here comes courtesy of the folks at Wowhead.

Here, take a closer look at things in motion:

The Battle for Azeroth release date is set for August, so there’s not much longer to wait. Lately, we’ve learned that you can ride everything from hiveminds to laser dolphins, and there’s been plenty more on the expansion ever since its BlizzCon reveal – all of which promises a wild ride for WoW fans.