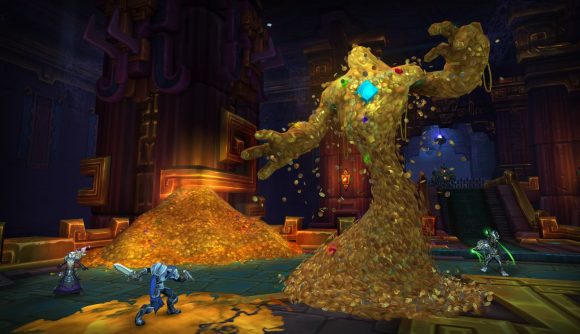 WoW Classic launches next month, taking players back to the earliest days of Azeroth. But while the MMO’s long-term fans are aching to relive those halcyon days, it’s fair to say that World of Warcraft used to be a little fraught. Thankfully however, it looks like Blizzard is a little better-prepared this time around – especially when it comes to gold farming.

In an interview with Eurogamer, lead software engineer Brian Birmingham said that the developer hopes that it will be able to keep the practice of gold farming – buying and selling in-game currency via a third-party ‘black market’ – “under control.”

Currently, World of Warcraft allows players to buy gold via the Token System, but Birmingham confirms that this won’t be available in Classic. He does note, however, that “players have pointed out that since it’s a shared subscription, if you wanted to farm a bunch of gold in modern WoW and use that to re-up your subscription, that does get you another month of Classic WoW access as well.”

When asked if Blizzard is expecting more issues around gold farming, Birmingham said that “as long as a human is at the keyboard and they’re actually running around, doing things,” there shouldn’t be a problem.

Instead, issues arise “when someone has got some kind of automation program doing the gameplay for them.” Birmingham points out that that practice is against the game’s terms of service, but it should also be far easier to crack down on that behaviour now than when WoW launched back in 2004: “we have better detection algorithms and techniques today than we had before, so we hope that will be sufficient to keep [gold farming] under control.”

Whether Blizzard has a handle on the situation remains to be seen, but I’m certainly intrigued to see how things play out. During public tests earlier this year, players complained about WoW Classic bugs that turned out to be long-forgotten features. I can’t wait to see what aged treats they discover when they get access to the whole thing.