The ease of publishing games on Steam and other services has allowed us to play a lot of wonderful games that otherwise might never have existed. However, it’s also allowed for the creation of games that perhaps never should have existed.

Check out the best free MMOs on PC. (Dragon Glory is not one of them.)

I’m not saying that Dragon Glory doesn’t deserve to exist, but its rights start to seem questionable from the very start. It’s a free-to-play RPG that you barely interact with, and for the five minutes I had it fired up it seems much like one of those Facebook games you’re supposed to absentmindedly click on every half-hour or so. That’s fine and all, but the real problem comes when you start to actually look at it.

Much of Dragon Glory’s art is the selection of generic fantasy tropes and improbably underdressed women that you’d expect to see in the banner ads on Facebook. You know, the kind of game you’re not supposed to play when your girlfriend is home, “master.” But among that art are some things that bear a striking resemblance to World of Warcraft characters.

Of course, Warcraft owes all sorts of debts to various fantasy works that came before it – Warhammer in particular – and realms of wizards and dragons have been done so many times it’s tough to be entirely original. But, well, just have a look at a couple of Dragon Glory characters alongside Warcraft’s Deathwing and Prophet Velen. 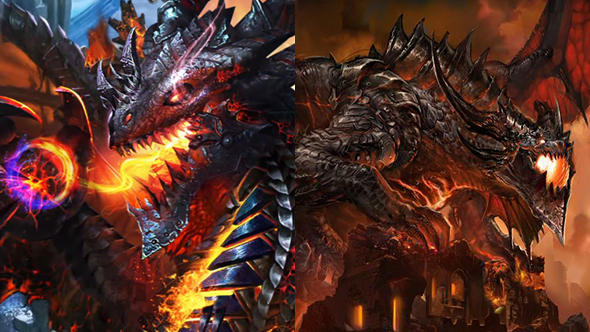 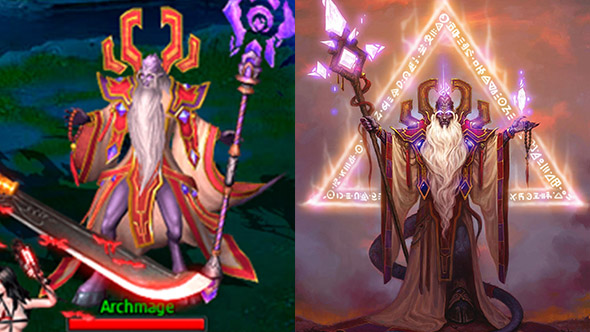 Like, come on. And these are just the bits shown in the official trailer and screenshots. As far as I can tell, much of the art in Dragon Glory is actually original – it’s just modeled on existing characters down to the last detail. I can’t say for sure that Blizzard have not negotiated a licensing with developers TeamTop Games, but I will say that such a possibility seems rather unlikely. Maybe Dragon Glory is secretly the next WoW expansion?