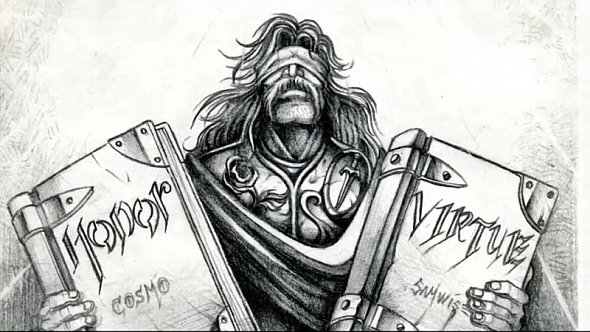 I’m pretty sure we can all acknowledge the massive influence Dungeons and Dragons has had on videogaming, but it keeps proving itself in new and interesting ways well beyond the obvious realm of CRPGs like Divinity and Pillars. Turns out some of World of Warcraft’s most iconic characters found life in Blizzard art director Samwise Didier’s D&D campaign.

Illidan joins your expedition to Argus in World of Warcraft patch 7.3.

“Uther [the Lightbringer] was based off a blind Paladin I created artwork for,” Didier tells Reddit, in an AMA. “In one arm he carried a book of Honour. In the other, Virtue. It was a pencil drawing I did in ’95.

Redditor StuntedSlime (we appreciate the niche Star Wars reference there) posted a link to that drawing, which was featured in an online documentary. Turns out D&D inspired more than just Uther, however:

“The look of Illidan [Stormrage] was based off another character I did as well. The stories were created here by Metzen and the War III team but the original art was from before. Funny that Uther ended up not being blind and Illidan did.”

Didier ends on a tease: “There are others as well but that is for the next AMA.” Perhaps we’ll see more, as Didier says he still plays D&D, mainly in weekend-long campaigns with his old high school friends.

Another interesting tidbit: Didier is the creator of the Pandaren (after he, as a hairy but friendly person, was given the nickname ‘Panda’), and now they’re evolving. Didier has written a fantasy novel, The Last Winter, in which a race called the Pandyr are threatened by an alliance of frost and fire giants. Asked if there’s any relation between the two, Didier explains:

“The Pandyr were created after seeing a certain Black Metal band, playing in full corpse paint, in the snow, singing about dark and black grimness. I thought they looked like Viking pandas. Thus, the Pandyr were born.”

Warcraft fans will definitely want to check out the whole MMA, but it’s a fun read even if you’re not – Didier seems like a cool dude. Check it outhere.