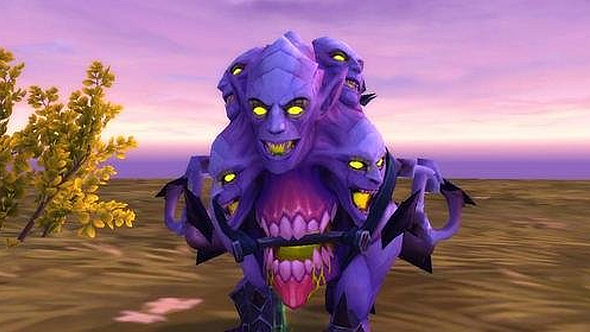 World of Warcraft’s next patch, 7.3, adds a mount called an Ur’zul. Ur’zuls are made “from the tormented bodies and souls of fallen members of the Army of the Light,” and at least one is partially made of dead children.

Here’s what other horrors are coming in Legion’s 7.3 patch.

On the official forums, Baenura noticed a new battle pet named Uuna in the Legion PTR. Uuna is the ghost of a dead Dranei child, which is in itself a bit of a dark thing to take into battle with you, but there’s more.Her description reads:

“One of the many children thought lost in the battle for Argus, only to find themselves infused into an Ur’zul.”

The Shackled Ur’zul was confirmed a while ago as 7.3’s new mount – it’ll drop from the final boss of the new raid. Here’s its descriptionaccording to Wowhead:

“Formed from the tormented bodies and souls of fallen members of the Army of the Light, the Ur’zul is both fascinating and horrifying.”

It seems Baenura’s conclusion is accurate: Legion’s 7.3 patch will add a rideable mount made from dead people, at least one of which is a child. In fairness, Baenura acknowledges such grim lore isn’t unprecedented: Thaddius, one of the bosses in the Lich King’s flying citadel Naxxramas, is also made of women and children.

Personally I like my fiction dark and gritty, but perhaps that’s why it’s been ages since I last played WoW – something so grim does seem an odd fit with Blizzard’s customary family-friendly aesthetic.

Does this go too far? Leave us your thoughts in the comments.