World of Warcraft’s latest raid, Tomb of Sargeras, hits the game tonight. Since Nighthold, the game has lost some of the immense popularity and surge in playerbase it received post-Legion, and many high-profile guilds have stopped raiding altogether. While this is semi-expected for a game with such a predictable cycle, it does put this raid in an interesting position. Morgan Day, senior designer, talked to us a little about what it offers.

One of the guilds from our big interview about raiding in WoW has already shuttered.

For some context, Tomb of Sargeras is essentially the end of many of the storylines that started in Legion. While it isn’t the final raid – there’s an entire alien planet and much more awaiting in patch 7.3, or so we believe – it’s something of a culmination for the last year or so of the game. It sees players dive into the depths of the Broken Shore, where the expansion started, fighting demons and corruption, and finally going one-on-one against big bad Kil’Jaeden on his battleship. Sweet. 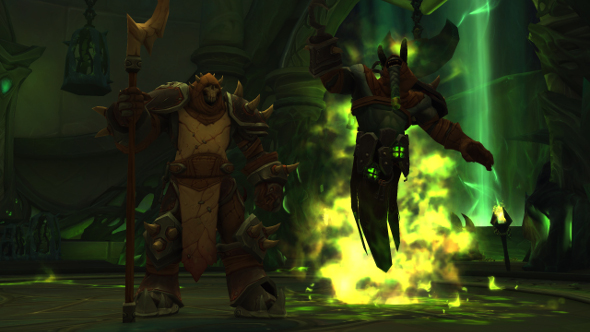 PCGN: Can you give me a general overview of Tomb of Sargeras – particularly designing the layout of the raid, and what you folks think about when you’re putting that together?

Morgan Day: Yeah, absolutely. Layouts are really fun and we have a lot of history with the Tomb of Sargeras. We knew going into this raid that this is where we’re going to be taking the Pillars of Creation, and it’s the culmination of the Legion expansion coming in here. We knew we had to pay that off where possible, so one of the things for us that seemed really interesting was that you’ve got the Pillars of Creation – which are from the titans themselves, like Aman’thul and Aggramar – and so we could try to take those pillars and use them in the raid itself. You use the tidestone in what we call the Naga wing, the cave system, and then we just kind of run with it from there. What works well in terms of flow, number of bosses… like, if we’ve got these wings that are correlating to these Pillars of Creation, how can we make the story sing with all of these elements coming together?

Do you expect there to be a difficulty curve increase as we get deeper into the expansion?

I don’t think so. When you look at our past raids, and what people consider to be the hardest boss of the expansion, I don’t think it’s universally considered to be the ‘end boss’. It’s not our philosophy or our goals, and I think our history has shown that a bit. If you continuously make the raids harder, you have the potential to push more and more people out. That’s one way to look at it, I would say. We’re really excited about the raid in Tomb of Sargeras in particular. It has a tonne of story in it – you know, we finally seal up the tomb and kick the legion off of Azeroth. That’s a big deal. 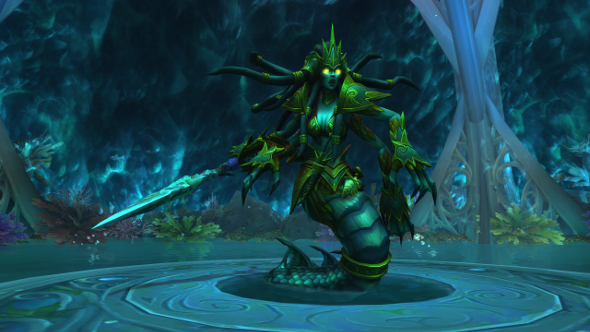 You mentioned bosses there. Are there any in Tomb of Sargeras that you’re particularly excited about? Is there anything you’re doing that you think is new, different, that will really surprise people?

There’s a couple of things I’m really excited about. For one, in Tomb of Sargeras there are opportunities to bring the environment into play as part of the encounters. Any time we can do that, we always strive to do so. I feel like we have such a fantastic dungeon art team – they make amazing art. And when we can marry those two things with art and design coming together to create this super compelling encounter where possible, we try to do that.

So there’s a couple of places I’m really happy with the results in Tomb of Sargeras. The Maiden of Vigilance is a really neat encounter. If you’re familiar with encounters like Thaddius in Naxxramas – like, with the positive charge and the negative charge and you have to stand next to everybody, and if you stand next to the opposite charge, you would explode – we’re exploring that again, but instead of exploding, you become the bomb for a minute. And, in that room, there’s an elevator shaft, but the elevator isn’t active until you defeat the encounter. So there’s just this big hole in the middle of the room. Once you become the bomb, you will explode – sorry, spoilers on this encounter – you blow up the raid, but if you jump into the hole in the middle of the room at the right time, you won’t blow up the raid. Because, you know, you’re not on the same playing field as them anymore. You’re in a big hole. The bomb will then also knock you out, and back up on your platform to safety – if you time it well.

Oh, okay. I can see some wipes coming from that one.

Hilariously wiping is my favourite way to put it. Wipes are great. Hilarious wipes? Even better. [Wrath of the Lich King’s end boss mechanic] Defile is always one of my favourite ones. People always have stories about doing so well and then “oh my gosh the whole platform! Awwww, we wiped…”

I remember the first Thaddius kill video I ever saw, and they all ran together in the middle to get the loot as soon as they killed it, and they all died immediately. And there’s just one guy going ‘No, the debuff!’

[laughs] But they won.

They did, they did it.

There’s another cool thing: the Fallen Avatar encounter. It’s the form that Sargeras took when he was on Azaroth, but it’s since been sealed away in this Tomb. It’s one of the things the Tomb is locking up. And in that encounter, it’s actually a multiple floor encounter, so there’s a first floor and that whole floor falls out. We experimented with that before with the Blackhand encounter. It’s always cool to do that when we can, but with this one, we went a little bit further. The bottom floor of this encounter is – I like to call it ‘don’t break the ice’ – it’s segmented into individual pieces that could each fall out. It’s like a Jenga tower, but it’s horizontal. The encounter takes advantage of that mechanic in a couple of really cool ways. The whole floor is falling out from underneath you in pieces, which is really neat.

Have there been tech improvements that have allowed you to be able to do this?

Absolutely. It’s one of the things about raids that keeps it fresh and exciting for us. Not only are we visiting these really epic environments – like you mentioned Emerald Nightmare, and the Nighthold, and Tomb of Sargeras are these places where you can have encounters that feel very specific to their environment. On occasion we get these neat new technology improvements, or new spell effects, or new things that we can do and incorporate into encounters. Sometimes with environments, we get technology like this.

Other times, we get new spell effects. One that I’m sure people noticed we got was movement forces, which would push the player back. I remember when we first got that, people were so excited. They were like ‘You know what we could do? When you go into a rapid, the river can push you back’. I’m sure you noticed that in High Mountain in a couple areas, we used that stuff in encounters. So with this one, we’ve got the technology that allows us to take that to the next level.

Totally. We’re fighting Kil’jaeden as the end boss of Tomb of Sargeras. Players have encountered him before, long ago.

Exactly. He was bigger, but he was also just a torso. He couldn’t move. He had no legs. 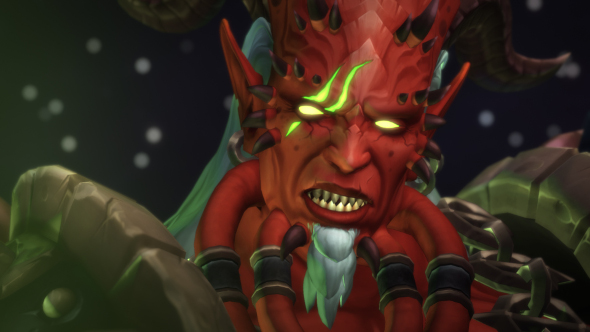 None of that ‘flying about’ stuff.

This time around, he’s going to take advantage of the fact that he’s an Eredar Lord with these giant wings. He can shield himself with them – which is making a return in the Tomb of Sargeras [because] when we have a recurring villain, we try to have some of those nostalgic features.

When you think of Kil’jaeden, what are the things you really remember about him? The two pieces we brought back – which I don’t know if anyone saw – he has Darkness of a Thousand Souls, where he’d wrap himself in them and protect himself, and you’d have to stop him from doing it or bad things would happen. That’s making a return, which I think will be really cool for players who’ve seen him in both incarnations. They’ll be like ‘I remember that thing – that used to hilariously wipe us!’

What we were previously talking about with new effects – I guess you could call it technology – there’s something called the Deceiver’s Vale. You mentioned the first intermission but there’s a second intermission after that where Kil’jaeden puts a veil of darkness on the whole raid where you can’t see more than this little sphere around you. The lighting gets really dark and you’re fumbling around. In order to get out of that stage of the encounter we have to get Velen and Illidan to help us out.

Oh, right. I was wondering where they came in.

Right. If the guy got to the second intermission, he would have seen that part. 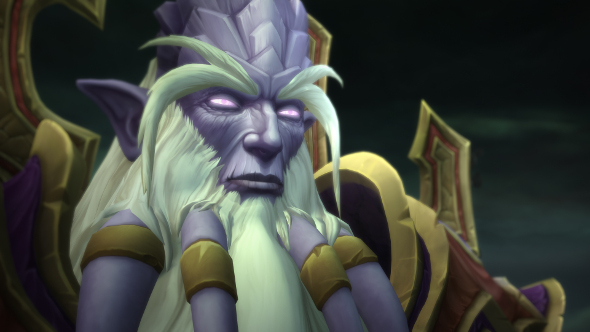 They were struggling a little bit with getting blown up permanently. So finally, patch 7.2 came out a while ago now and was called Tomb of Sargeras. I know they’re not meant to be directly linked but with that timing, was there an intention that the raid would come out a little earlier? Were there delays?

There were no delays. That wasn’t really the case. With Legion, the expansion, our mission is – and I really think we achieved this – to deliver players fun and engaging content at a satisfying pace. When we looked at 7.2 holistically, we were like ‘Yeah, people are still working their way through Nightwell’. We didn’t think the timing would work well right on the heels of this other raid. We wanted to give it a little more time to breathe. We announced our date recently. Now is a good time to release it.

Thanks for your time – I hope nothing breaks.