World of Warships is a strategic, naval multiplayer game in which you control giant, hulking vessels equipped with artillery powerful enough to explode the opposition into oblivion. You can attack with your cannons from your ship’s deck, you can obliterate other ships from above with an aerial assault, and now there’s a third dimension being introduced – you’ll be able to attack from the murky depths below.

Warships fans have been asking for submarines since day one and developer Wargaming has received the message loud and clear, and is finally responding. With submarines you’ll be able to sneak underneath the carnage and mayhem, quietly encroaching on your victim, attacking unexpectedly from beneath the waves. Each one of the subs will have a gorgeous distinct steampunk aesthetic complete with cogs, golden edging, and highlighted details.

These silent wolves of the sea will be available to play as a fifth class in the upcoming PvE Halloween operation, But, as with the intergalactic April fools event, they’ll be gone once the event ends, sinking away into the depths. So let’s go over what these subs can do, how they’ll switch up the Warships formula, and what to expect if you come up against one.

The submarines are the “fragile ninjas” of the sea, Wargaming’s regional publishing director Rajeev Girdhar tells us, and are a “high risk, high reward class, which means it’s extremely fragile but if you’re positioned well enough you can create havoc.” If the submarine is spotted by an enemy ship they can dive under the surface and be fully submerged under the water. However, with such an advantage comes draw backs: “they are the weakest class,” Girdhar explains, “they have to be otherwise they’re too strong.” 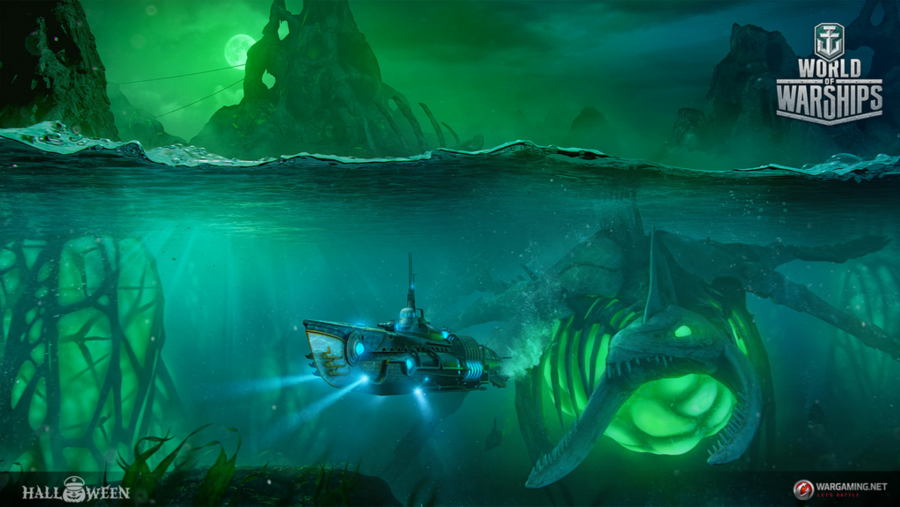 The submarines only have one artillery weapon – the torpedo. Each vessel has two tubes, a torpedo each. which can be launched independently of each other. If one hits its target it can cause an immense amount of damage, so a well hidden submarine with loaded torpedos is a real threat to the opposition. But again, to stop them from being too powerful, there’s a catch. You must be above the surface to fire them leaving you open to being spotted by an enemy ship. 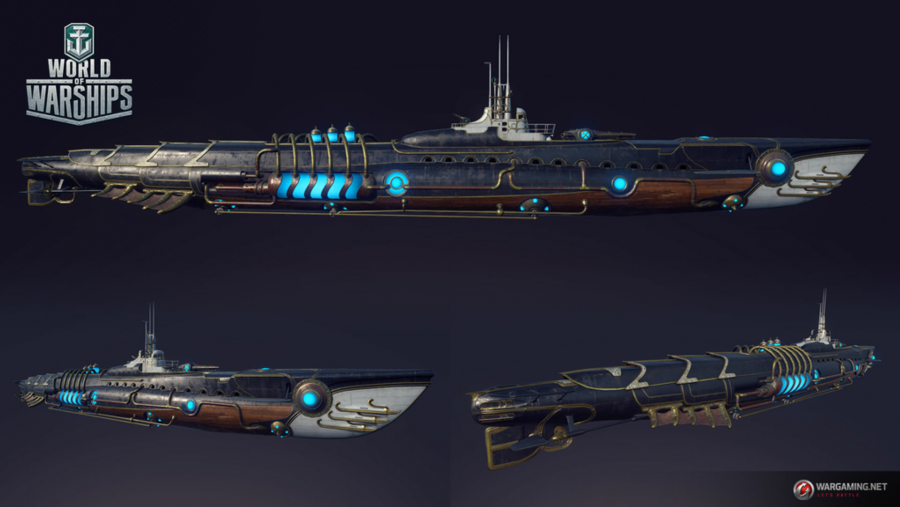 You’ll be able to sneak underneath the carnage and mayhem, attacking unexpectedly from beneath the waves

Another danger is that how much time you can spend underwater depends on your oxygen level. “You cannot be completely submerged and be a ninja all the time, you need to come up,” Girdhard explains. Planning when and where to resurface to regain oxygen is essential to using the submarines and brings another layer of tactical play.

So, what if you’re a ship and spot something within the water? To counter an incoming submarine ships will have the ability to release depth charges. These charges either explode on impact or, probably more frequently, will sink and explode at a random depth. Submarines are pretty dexterous, and (with skill) can be manoeuvred away from these charges if you spot one sinking through the sea. 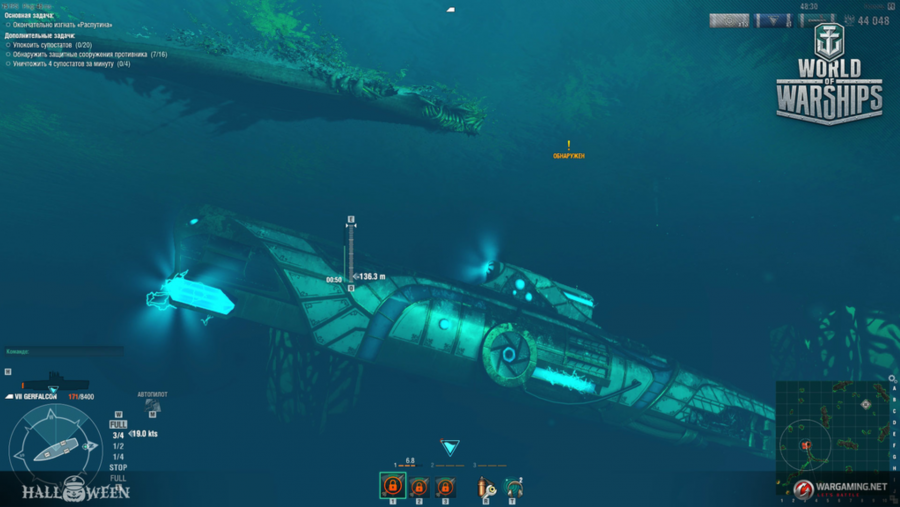 While the submarines will be a great addition to World of Warships there’s a reason Wargaming is reluctant to make them a permanent feature. “We want to get it right,” Girdhar says, “obviously, we don’t want to break the game, so this is something that we need to do carefully and Halloween gives us the chance to see how players behave.” If the event goes well, and the submarines aren’t too powerful, Girdhar says it’s possible they’ll become a permanent fifth class to Warships in 2019.

Looking for a stress free time beneath the waves, Subnautica's freedom mode lets you explore its oceans without the threat of depth charges.

As well as getting three steampunk subs, there will be nine new steampunk inspired commanders to choose from: one is a dapper mustachioed inventor; another comes in a trench coat and is inspired by Davy Jones with tentacle hair; a third has huge, shiny bulbous eyes and a leech-like mouth. This is all in the spirit of Halloween, and is matched by the new creepy map, which will have new ship builds to explore it in. That includes monster-machine hybrids, with one having a giant octopus wrapped around the ship, and another has its bow turned into a giant monster’s head with a hundred sharp teeth. 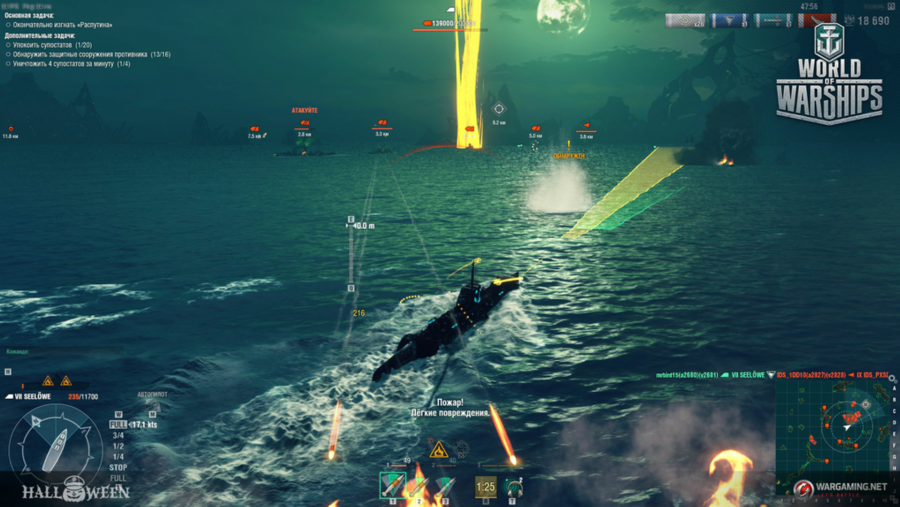 “Every year we get two chances to let go of history and do what we want,” Girdhar says of this new content, “this is where we can try new stuff without breaking the game.” Although Warships is fully supportive of the historic side to the game, these annual events give the developers a chance to have some fun with the designs while testing the waters for new content and gameplay.

In that spirit, there’s more than the new submarines and map to look out for in the Halloween event. Specially for Halloween, Wargaming has added deep sea monsters to World of Warships. Bigger than any ship or submarine, these Lovecraftian creatures are colossal in size and loom in the shadows in the depths of the ocean. The sea monsters have some mystery behind them, as it’s not made obvious how they’ll work in matches, but they’ll certainly be a big threat for you to deal with.