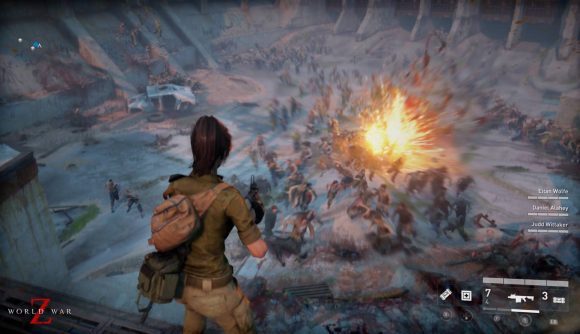 June 8, 2019 World War Z’s digital sales are better on the Epic Games store than anywhere else.

The new figures come from Matthew Karch, CEO of developer Saber Interactive. The developer also confirmed that those sales numbers make the EGS the top digital platform for the game, which Karch says has now sold “well over two million copies.”

The success of the game’s Epic Games store sales mean that PC has become an important part of World War Z’s impressive sales figures. While the PS4’s physical sales mean that Sony’s console is the leading platform for the game, Karch says that Saber didn’t quite expect the response on PC – “we always believed the game would find a good following on PC eventually. The surprise was just how quickly it happened, and how important Epic’s platform was in getting us there.”

An impressive share of sales on PC comes in spite of a backlash against the Epic Games store in general, something Karch says he doesn’t really understand. “We don’t see backlash when console manufacturers create games that are just for their hardware, and buying a system for a game is obviously a much more onerous requirement. My hope is that once there is feature parity on the PC platforms, we won’t hear as much complaining”

Despite somewhat mixed reviews at launch, the third-person co-op shooter overtook The Division 2 for the top spot on UK retail store charts. The game takes inspiration from the popular film and novel to create a player vs player vs Zombies experience.

The title was exclusive to the Epic Launcher on PC, and Karch credits it for its strong performance. “On the PC specifically, we are performing way above expectations thanks to the support we have received from the Epic Games Store.”