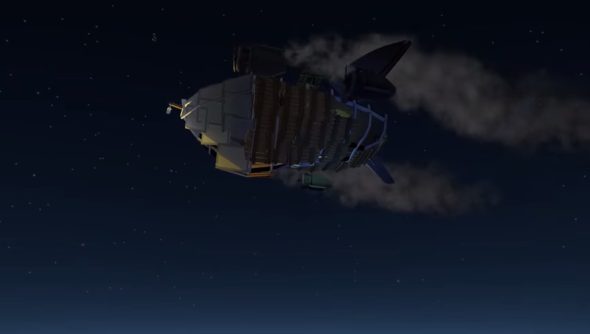 Bossa Studios, Surgeon Simulator and I Am Bread developer, has got one on the go too. It’s Worlds Adrift, which they announced late last year. They’re coming at it from a slightly different angle than most. It’s to be a persistent online sandbox, where most of the game takes place in the sky, and underpinning it all is Bossa’s love of physics.

After the first look in December, Bossa didn’t really delve into what the game actually was, or at least not the big picture stuff. But this month the studio’s started to reveal more of its game, with videos showing off a bit of ground combat, crafting and more of the grappling hook traversal stuff.

Obviously a lot of it is still placeholder.

Along with another video last week, that showed off what is likely to be the game’s big hook, sky ships and shipbuilding, Bossa shared its vision of the game.

“You and your ragtag band wander from island to island on your cobbled-together airship, scouring for lost technology and scavenging for resources. You are constantly trying to improve your ship, keep it fueled, and keep it repaired. Sky predators, storms, and other travelling bands—all of which could be a threat to your ship—will dominate your thoughts. But in the back of your mind, you still ask yourself questions: How did your world become this way? What calamity, a thousand years ago, could have shattered the world into a thousand pieces? Deep down you know that the world was not always this way, and your questions are what drive you onward and upward, towards the endless skyline.”

World Adrift’s servers will be big, persistant things, one for each region, but Bossa is keen to note that it won’t be like most modern MMOs.

“We hope Worlds Adrift will be a return of sorts to the roots of online multiplayer games. We want it to be a freeform exploration and adventure game where players create their own objectives, because we believe those are consistently the most rewarding and empowering goals to attain. We want the rules of the game world to be coherent and intuitive, and for players to be able to tell their own stories through their actions.”

So there won’t be quests, levels, static environments or repeatable events. The game’s creatures will live out their lives, search for food and, eventually die. Trees will grow, until they are chopped down by shipbuilders. And even shipwrecks rot away as they are consumed by rust and time.

The world will grow as more players join and explore it – literally. It’s procedurally generated, and gets bigger to accommodate more players. And this growing world will have a foundation of believable physics, which you can read more about in this older blog post.

A separate team is working on Worlds Adrift, so hopefully it won’t have an impact on I Am Bread, or vice versa.